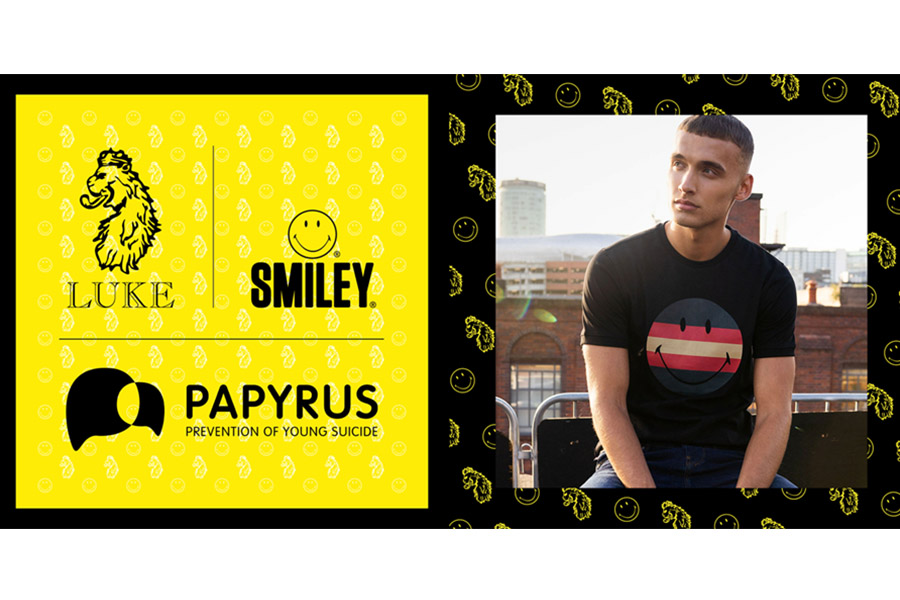 British menswear brand Luke1977 will donate 20% of sales from their Smiley collaboration to the charity Papyrus.

British menswear brand Luke 1977 has debuted a collaboration with Smiley for Summer 2020 with a percentage of profits going towards youth suicide prevention charity PAPYRUS.

The capsule line blends the lifestyle and musical heritage of both brands to create an effortlessly cool range of T-shirts, bucket hats and towels that feature large Smiley prints. With music and pop subcultures at the heart of both brands, the collection combines Luke’s modern lad influences with Smiley’s 90’s street culture iconicity.

The collection – aimed at young men – will impact a demographic who are more likely to die by suicide than any other cause and who are often less likely to talk about mental health. In the UK, suicide is the biggest killer of young people of all genders under the age of 35. Papyrus work to create a society that speaks openly about suicide and provides a range of support to those who experience suicidal thoughts.

PAPYRUS was founded in 1997 by a mother, Jean Kerr, from Lancashire, following the loss of her son to suicide. Since 1997, PAPYRUS has continued to listen to and learn from the experiences of those personally touched by young suicide.

The profits from the collaboration will help fund the vital services the charity provides, including confidential support and advice for young people and concerned parents, friends and teachers through their helpline HOPELINEUK.

Nicolas Loufrani, CEO of The Smiley Company, said, “It’s another excellent example of how we are trying to find purpose with our licensing partnerships, using our non-profit Smiley Movement to facilitate charity relations that are aligned to our partners’ values. Papyrus’s cause is hugely important and close to all of our hearts and we hope to build long term support for them.“

With the need for charity growing, PAPYRUS has established itself across the UK, with offices in Warrington, London, Birmingham, Cardiff and Belfast. However, their support is still urgently needed across the country. To access these communities and provide them the support they need, equipping them with the tools and resources needed to prevent suicide, requires funding. The Luke 1977 x Smiley collaboration will ultimately ensure that fewer lives are lost to suicide.