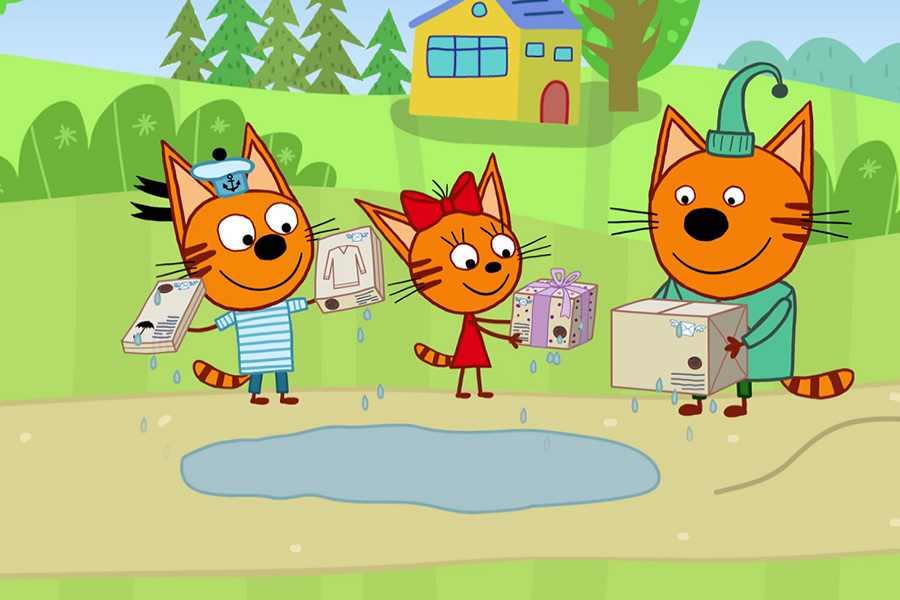 Tags from the story: KID-E-CATS.

Kid-e-Cats – produced by CTC Media and Studio Metrafilms – available in over 150 territories in more than 30 languages, tells the hilarious adventures of three tender kitty brothers Cookie, Pudding and their little sister Chicca who together learn to express their emotions, enjoy finding a solution in any situation, with the help of their imagination and some wise advice from their parents.

During the virtual presentation, Ksenia Gordienko, director of the animation department of CTC Media, and Lionel Marty, CEO of APC Kids, also spoke, highlighting in particular the exceptional results achieved in Russia, Italy and the world, where they currently have 15 licensing agents; in the Russian market alone there are over 70 licensee companies active.

They also presented an important amount of graphic material to support Licensees (more than 15 Style Guides) in addition to other specifications created for the Publishing category (books and coloring activities) and for Infant and Kids clothing.

Ilaria Rossi, Licensing Director of Boing Spa, has revealed that in autumn the third season of the series will arrive in Italy for the first time on Cartoonito (DTT channel 46).

Kid-e-Cats content is also available on-demand on the Cartoonito App – the completely free channel application, available on Android (Google Play) and iOS (Apple Store) – which, while fully respecting the privacy of its users, does not require any registration or data profiling where children can watch the channel live streaming.  On the Cartoonito App Kid-e-Cats is the 6th most watched content ever, from launch to date.

The Licensing program continues in Italy with Salani, Lisciani, Centauria, Wal-cor and the expected distribution of the Toy Plus Master Toy from September 15th: in particular the launch of plush toys and 3D figurines will be supported by a large television advertising campaign on the main national networks during the Back to School.

At EMEA level agreements have been signed with Ravensburger and Clementoni, while in Italy Koch Media’s DVD collection will be available starting from Back to school.

Boing Spa is working to further expand the product categories during 2021 in order to replicate the Russian success, where Kid-e-cats is the best-selling and most followed property among all preschoolers.