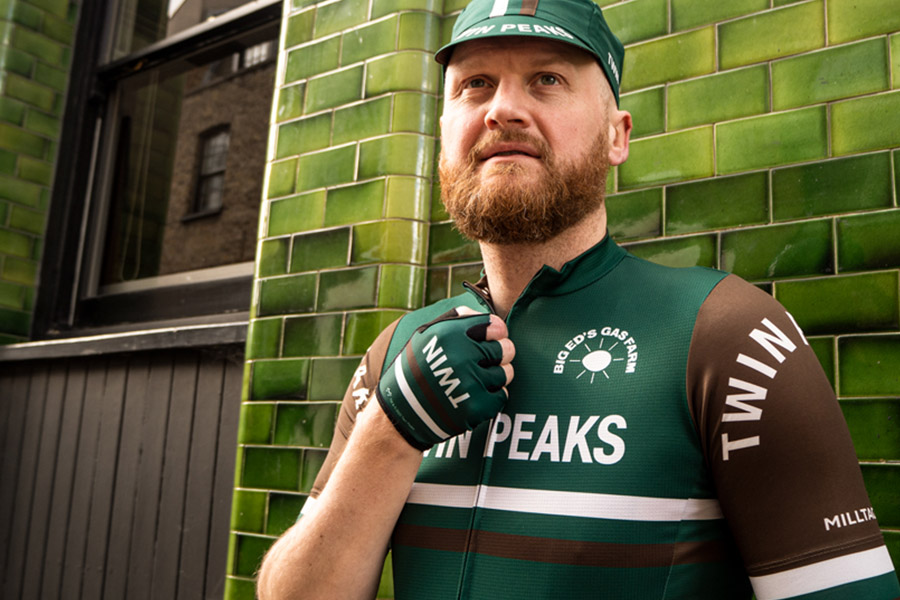 WildBrain CPLG, one of the world’s leading entertainment, sport and brand licensing agencies, has inked a deal with London-based cyclewear brand Milltag for a capsule collection to celebrate the 30th anniversary of original TV series, Twin Peaks, which premiered in 1990. Brokered by WildBrain CPLG on behalf of ViacomCBS Consumer Products, the Twin Peaks x Milltag collection features a full range of cycle clothing including a jersey, shorts, mitts, snood and cap, and will be available for a limited time in the UK this summer.

The range combines cutting-edge garment technology, high-performance fabrics and a slim fit. The collection’s earthy green and brown tone colourway is inspired by the natural surroundings depicted in Twin Peaks, and is adorned with the logos of iconic local businesses from the series including Double R diner, and the Packard Sawmill.

Laura Quinn, Category Manager UK at WildBrain CPLG, said: “Twin Peaks has an avid and highly engaged following thanks to its bold, original and genre-bending approach which remains influential to this day. With the show now celebrating its 30th anniversary, we’re very excited to be collaborating with Milltag and translating the brand into a dynamic and high-quality cyclewear range, which we’re sure will be a huge hit with fans across the UK.”

Ed Cowburn, Owner at Milltag, said: “Milltag’s favourite projects are ones that hold emotions for people. Whether it be producing products based around someone’s favourite film, album, band or in this case, television show. We like to think that these products mean more to people than a regular off the rack design. Hopefully that means they’ll treasure and look after them, leading to a more sustainable model of consumption as clothing is worn to the very end of its usage cycle. We’re incredibly proud of this project as fans of the show. The chance to add to the rich world created by Mark Frost and David Lynch in 1990 is a dream come true and we like to think we’ve designed something true to the essence of Twin Peaks.”

Created by Mark Frost and David Lynch, Twin Peaks debuted on ABC in April 1990 with an original two seasons and has become one of the most iconic television shows of all time. In 2017, a third season of Twin Peaks launched on Sky Atlantic. Set in a sleepy Washington town which is rocked by the murder of a young girl, Twin Peaks explores crime, loss, grief and life in small-town America.

The collection is now available for pre-order via the Milltag website (www.milltag.cc)