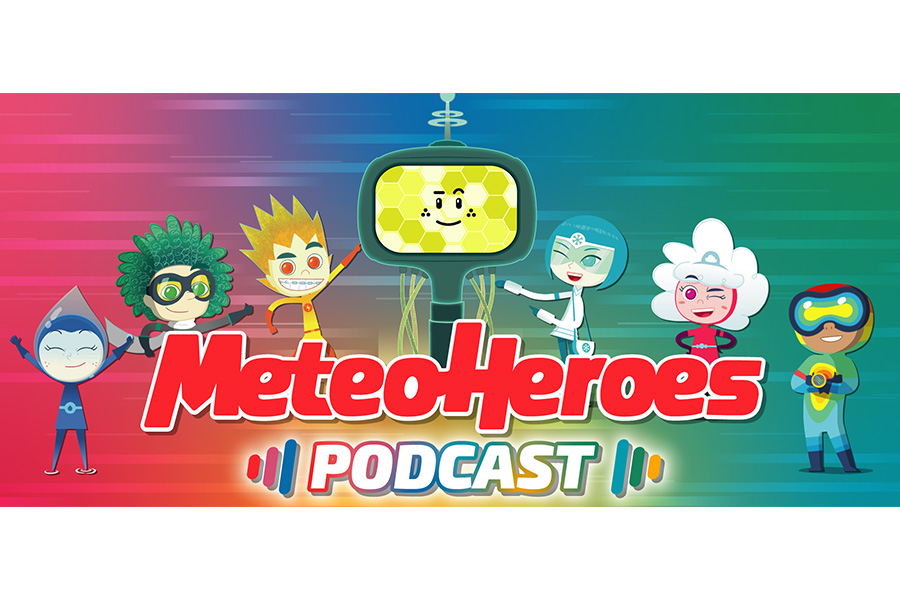 HERE COMES THE SPIN-OFF OF THE NEW CARTOON “METEOHEROES”

“MeteoHeroes”, the new Italian animated series on environment and ecology, will have its own podcast spin-off. The initiative is by Meteo Expert-IconaMeteo and Mondo TV, the two companies that have co-produced the cartoon on air since July 6 on Cartoonito. The first 5 episodes of “MeteoHeroes Podcast” will be available from next October on all the main podcasting platforms, in conjunction with the transmission of the new TV episodes and the arrival on the market of the first merchandising products. There will also be a special QR Code on the packaging of the products: just frame it with your smartphone to listen to the podcast.

In the “MeteoHeroes Podcast”, the six little superheroes of the series will play a new game in children’s imagination, going beyond the traditional TV screen to the new podcasting channel. Through the voices of the voice actors and an original and entertaining narrative style, the six protagonists will tell the little listeners about good behaviour for the protection of the planet and explain to them how they can contribute to the fight against pollution and the negative effects of global warming. For the production of the podcast, Meteo Expert-Icona Meteo and Mondo TV have availed themselves of a team of professionals, composed of producer Nicoletta Cadorini, flanked by screenwriters Matteo Venerus and Roberta Franceschetti and Elisa Salamini (Mamamo.it), who have also contributed to the production of the TV series. The dubbing is handled by the studio D-Hub, which has also collaborated on the TV series, while the distribution will be managed by the specialized agency VOIS (formerly Fortune Podcast) which, with the slogan “From ear to heart”, boasts collaborations with many prestigious brands.

“The MeteoHeroes project was created to reach the largest number of children in Italy and around the world, so that they can have fun while learning about the environment, respect for nature, the dangers of pollution and the importance of recycling,” said Luigi Latini, CEO of Meteo Expert-IconaMeteo. “We immediately embraced the idea of making audio episodes for podcasting platforms because it seems to us a modern and original way to allow children to have MeteoHeroes with them at any time of the day. These modern fairy tales lend themselves to children’s imagination. To entertain them while they learn about meteorology and climate is our goal and this new initiative is perfect to achieve our goal“.

“Today the podcast tool is having interesting developments in our country, interpreting a new need for communication increasingly widespread among today’s digital native children, to whom our TV series is addressed as well as this new ‘branded podcast’, the first one inspired by an animated series,” stressed Valentina La Macchia, Licensing Director of Mondo TV. “The goal, shared with Meteo Expert, is to offer young audiences a new narrative form, which can intimately connect children’s consciences to environmental issues. In this way we build today the resilience of tomorrow. The ‘branded podcasts’ also tend to create subconscious associations with the brand, therefore greater affection. Nevertheless, there are still few companies that integrate this tool into their branding strategies. We are honored to support our partners by offering them original and innovative content in order to increase the intrinsic value of their products.”

The animated series “MeteoHeroes” tells the adventures of six little superheroes, endowed with special powers to unleash the weather. Their secret CEM base, directed by scientist Margherita Rita (a name that pays homage to Margherita Hack and Rita Levi Montalcini), is on the Gran Sasso in Abruzzo, where Tempus artificial intelligence trains them to control their powers. They have to fight the most terrible of enemies: they are the Maculans, led by Dr. Makina, who represent the pollution caused by bad habits and harmful behavior of human beings. Thanks to the Jet Stream, young superheroes are teleported around the world to courageously carry out a very important mission: to save the Earth from climate change, promoting respect for nature and the environment.