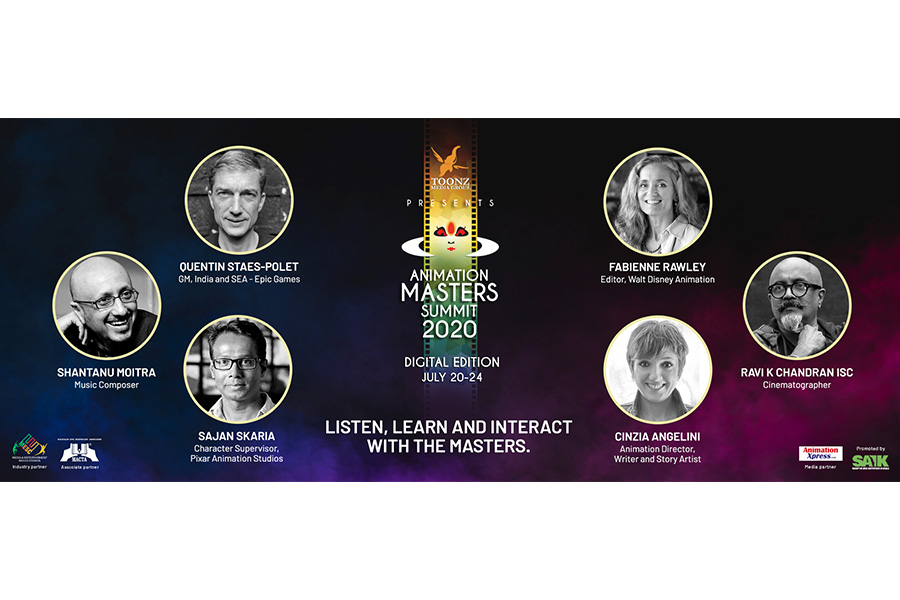 It is a star-studded line-up yet again at Animation Masters Summit, the mega annual event hosted by Toonz Media Group to celebrate art and creativity.  Animation Masters Summit 2020 – Digital Edition will make its virtual debut this year, the 21st edition of the summit.  The five-day event will be held virtually on the Zoom platform from Monday July 20 to Friday, July 24, 2020. The digital event will enable participants from across the world to attend and interact with the masters. Those interested can register for free on www.animationsummit.in.

From Academy Award-winning animators to doyens in the field of cinematography, music and gaming, the five-day event will include six highly engaging master sessions and two panel discussions. Path breaking animation feature director Arnab Chaudhuri, who passed away in December 2019, will be posthumously conferred the Legend of Indian Animation Award at the inaugural session of the Summit to be held at 9.00 hrs IST on Monday, July 20, 2020. Anuradha Aggarwal – Head of Infotainment and Kids cluster at Disney-Star India will deliver the keynote address at the session, while Mr Biren Ghosh – Country Head of Technicolour, India will offer felicitation. Toonz Media Group CEO P. Jayakumar will welcome the guests at the inaugural session.

The following four days will include master sessions by:

The Summit will also include two panel discussions including industry stalwarts who will deliberate on key business and artistic challenges faced by the entertainment industry in the post-pandemic scenario.

The second panel will delve on the pertinent topic of how the kids entertainment industry should innovate and sustain in a post-pandemic scenario. It will be moderated by Ashish Kulkarni, Chairman of FICCI for Animation, Visual Effects, Gaming and Comics Forum. The panellists include Anu Sikka, Head of Content – Kids Entertainment Cluster, Viacom 18; Don Anderson – Head of Family and Learning Partnership, YouTube APAC region; Leena Lele Dutta – Business Head at Sony Yay!; and Uttam Pal Singh – Head – Discovery Kids, Discovery Communications India.

The Summit will conclude on Friday, July 24, 2020. Here is the schedule of the event.

← IMAGINE EVERYTHING: THE FIRST DISNEY MEDIA & UPFRONT PARTNERSHIP LEOLANDIA OPENS THE CURTAIN ON THE NEW SEASON OF SHOWS →