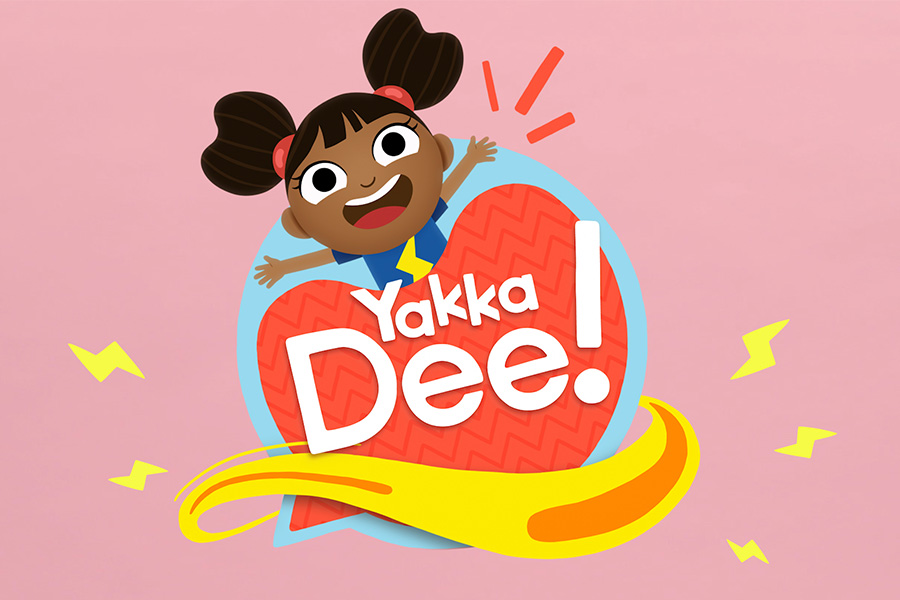 Rocket Licensing has been appointed as the international licensing agent (excluding China) for popular CBeebies show, Yakka Dee! Currently in its third series, the animation and live action programme is now in production for series four and five, which are due to air in 2021, with 100 x 5 minute episodes in total.

Dee helps children to reach this goal through play, visual representation and repetition. Each five-minute episode focuses on one word, with a mixture of live action and animated content and bright, bold colours. The branding is modern and vibrant, eye catching and idiosyncratic and hugely appealing to the young audience. Each episode is like a moving picture book!

In 2019, a YouTube channel was launched, experiencing an enormous 5.3 million views in the first two months. The channel now has 161K subscribers and 46 million views, and is growing exponentially on a daily basis. ‘Aprende con Yakka Dee: Panza’, a Spanish episode via CBeebies Español, has had over 80 million views on the channel since launch, while ‘Yakka Dee: Banana’ has received 30 million views and ‘Can you Say Tummy?’ has reached 17 million in just 3 months.

Initially, Rocket’s core focus for the property will be on toy and publishing categories, as well as educational product and resources, followed by other preschool product categories including apparel, accessories, social stationery, and games. Consumer demand for licensed product is high, with weekly requests from parents via the brand’s social media pages for toys.

Rob Wijeratna, Joint MD, Rocket Licensing, comments: “Yakka Dee! is a real gem in CBeebies’ programming, and combines all of the must-have attributes of a successful preschool property – fun, education and great characters – with contemporary, bright and instantly recognisable production. We are also proud to be representing an ethnically inclusive brand, with Dee as a non-white lead character having become an inspiring role model for many. The loyal fan-base is ready and waiting for consumer products and we’re excited to start talking to licensees.”

Yakka Dee producers Steve Smith, Lotte Elwell and Katie Simmons comment: “We are thrilled to partner with Rocket for Yakka Dee! licensing. We are so proud of our character, Dee, and have seen first-hand how she empowers children to speak with confidence, energising them and connecting deeply with them. We are looking forward to working with Rocket to create more touchpoints for our audience, and in so doing help more children.”

← METEOHEROES: FROM JULY 6TH ON CARTOONITO TV PREMIERE EVERY MORNING ON SUPER! IT'S CHICCHIRÌ TIME WITH BUBBLE GUPPIES →