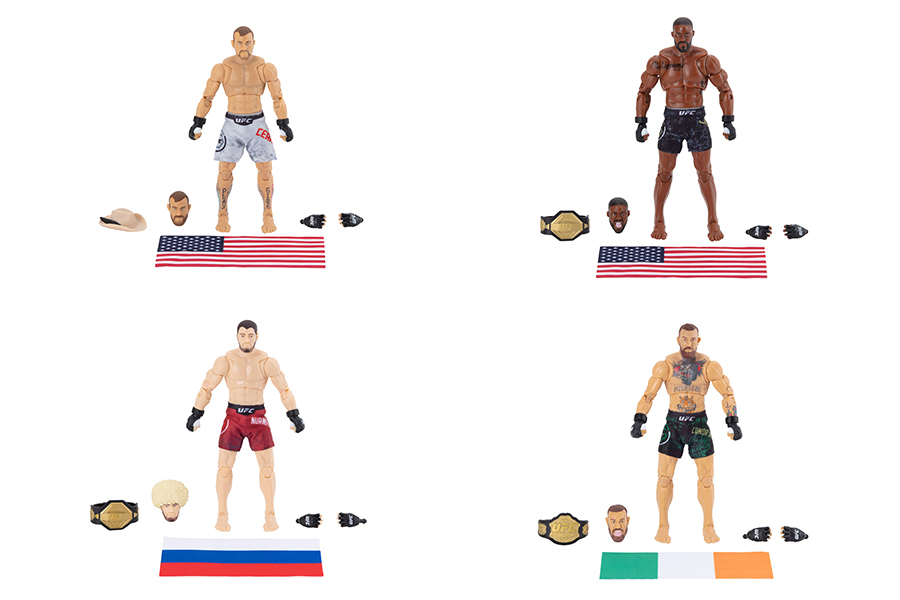 Jazwares, a global leader in play, and UFC®, the world’s premier mixed martial arts organization, are teaming up to bring the exciting world of UFC and mixed martial arts into homes everywhere with a new line of UFC action figures and role play collectibles. Now available for pre-sale at Ringside Collectibles, Jazwares’ UFC collectible line is coming soon to Amazon and will be available in Walmart stores in early August.

The UFC Ultimate Series limited-edition figures by Jazwares are the most detailed, realistic, and sophisticated representations of UFC athletes.  Each figure features the athlete’s true-to-life details including any tattoos, their respective weight classes and realistic facial expressions. These popular athletes also come with two sets of removable hands, each with UFC gloves, feature interchangeable heads and over 30 points of articulation to recreate your favorite UFC match ups.

“With an extensive roster of iconic UFC champions, this unveiling is unmatched. This new line of collectible figures will allow UFC fans, both kids and collectors, to engage and replicate the biggest UFC super-fight showdowns,” said Laura Zebersky, Chief Commercial Officer, Jazwares. “The collectibles celebrate the history and icons of the UFC today, and so we’re glad to bring this to life and offer fans authentic action figures that they can keep forever.”

“Jazwares is a great partner and UFC is pleased to offer fans this new line of limited-edition action figures to celebrate some of the greatest athletes and moments in UFC history,” said UFC Senior Vice President, Global Consumer Products, Tracey Bleczinski.

Launch at retail includes the first wave of seven 6″ premium figures of iconic UFC athletes. Additional products will debut at retail in Fall 2020, including figures, plush, an Octagon® playset and role play items such as the UFC Legacy Championship Belt.