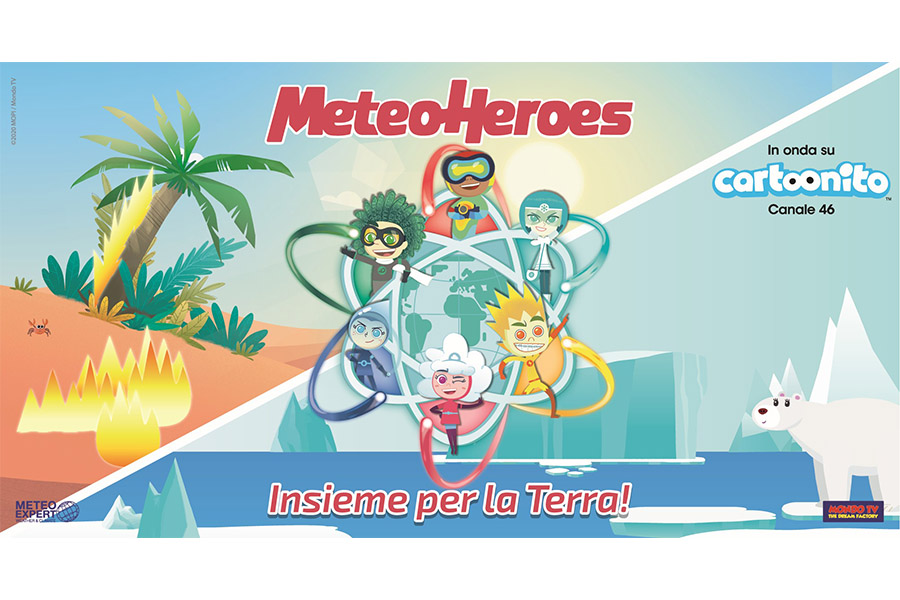 The highly anticipated Italian animation series “MeteoHeroes” arrives on TV. Starting next Monday, July 6, six very young superheroes will face a thousand exciting adventures, telling in a simple, instructive and fun way the themes of respect for nature, the importance of ecology and the dangers of climate change. The series will make its debut on Cartoonito (channel 46 of DTT) and will air from Saturday to Thursday at 8.20 pm. Conceived by Luigi Latini and born from the collaboration between Meteo Expert-IconaMeteo and Mondo TV, it features Pluvia, Nubess, Nix, Fulmen, Ventum and Thermo, a very close-knit team that will teach children what it means to take care of their planet, also dealing with current issues such as global warming, deforestation and the fight against pollution. Ahead of the launch, the series was presented this morning at a live streaming press conference on the official Facebook page @MeteoHeroes.

The adventures of “MeteoHeroes” begin on their tenth birthday, when they discover they have special powers to unleash the weather. Each one comes from a different corner of the planet and has a specific superpower: Pluvia is from Seattle (USA) and is able to make rain fall, Nubess comes from Buenos Aires (Argentina) and can control clouds, Ventum is from Cape Town (South Africa) and can unleash winds, Nix is from Harbin (China) and can make snow fall, Thermo comes from Rome and has temperature control, while Fulmen comes from Sydney (Australia) and is able to make powerful lightning fall from the sky. These six little superheroes will have to fight the most terrible of enemies: they are the Maculans, led by Dr. Makina, who represent the pollution caused by bad habits and harmful behavior of human beings.

The headquarters of the “MeteoHeroes” is the CEM (Centro Esperti Meteo Meteo), an international futuristic centre where the Tempus artificial intelligence, led by scientists and meteorologists, will train them to control their powers. The CEM is located near the Gran Sasso mountain in Abruzzo and is directed by the scientist Margherita Rita, a name that intends to pay homage to two great women of science of the calibre of Margherita Hack and Rita Levi Montalcini. Thanks to the Jet Stream, the young superheroes will be teleported around the world to courageously carry out a very important mission: saving the Earth from climate change, promoting respect for nature and the environment.

On the occasion of the preview on Cartoonito last April, “MeteoHeroes” was also a great success on social media, in particular on the official pages on Facebook and Instagram. The project received in 2017 the patronage of the Ministry of the Environment and the Ministry of Education, then in 2019 also from the Air Force and Legambiente. The exceptional ambassador of the project is Andrea Giuliacci, considered the face of Italian meteorology, who has been working on video forecasts for Meteo Expert since 2002 on Mediaset networks. But the surprises do not end there: the theme song of “MeteoHeroes” is sung by Francesco Facchinetti, popular deejay, producer, singer, musician and radio and television presenter, in collaboration with the group Raggi Fotonici.