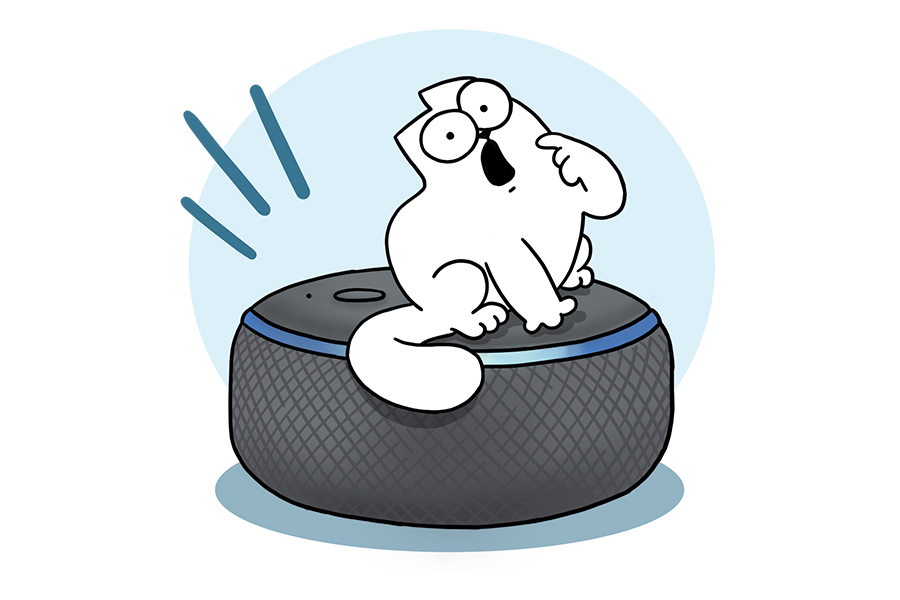 It was announced that voice solutions specialists Voice Interactive have developed two Simon’s Cat voice skills for global distribution through Amazon’s smart assistant. Talk to Simon’s Cat, enables users to listen to hundreds of never-before-heard Simon’s Cat sounds and Play With Simon’s Cat, allows users to adopt and play with their very own Simon’s Cat.

Accompanying the release of the recently announced voice skills will be a brand new ‘Baby Simon’s Cat’ plushie from leading social commerce platform Teespring. Building on the sell-out success of the first run of plushies with Teespring last year, the new product will be available for pre-order this week, for two weeks.

The new plushie is Simon’s Cat as a kitten which also ties into a new digital series launching on YouTube. Origins is a three-part black and white strand which will take audiences back for the very first time, to show the beginnings of showing how Simon and his infamous cat first became acquainted.

And later this year, a full-colour special of the Origins films will be released to tie-in with the delivery of the plushie orders.

Simon Tofield, Simon’s Cat creator said, “It’s been a real pleasure exploring the story of how Simon’s Cat became part of Simon’s family. I’ve totally fallen in love with Simon’s Cat as a kitten, and the accompanying apparel and games really add to the overall experience of the story.”

Jane Smith, Director of Brand Licensing and Gaming, Endemol Shine Group, added, “This range of deals demonstrates the strength and adaptability of digital brands as they connect consumers through creative storytelling, engaging digital interaction and physical products. Our partners in this venture are all best in class and we are excited to bring Simon’s Cat to our global fanbase and introduce them to a brand-new character.”

The Simon’s Cat brand enjoys international success across multiple categories including gaming, publishing and apparel. Last year alone saw sell-out success with its first range of Teespring plushies; a brand new book Simon’s Cat It’s a Dog’s Life which brings everyone’s favourite feline back to the page, with a canine twist; and continued international growth with further agent appointments in the Nordics and CEE, and Southeast Asia.

Nearly 2 million Simon’s Cat books have been sold, and there are more than 80 million digital sticker downloads. The brand has 6.5 million fans on Facebook, 2 million followers on Instagram, and more than 1 billion views on YouTube.