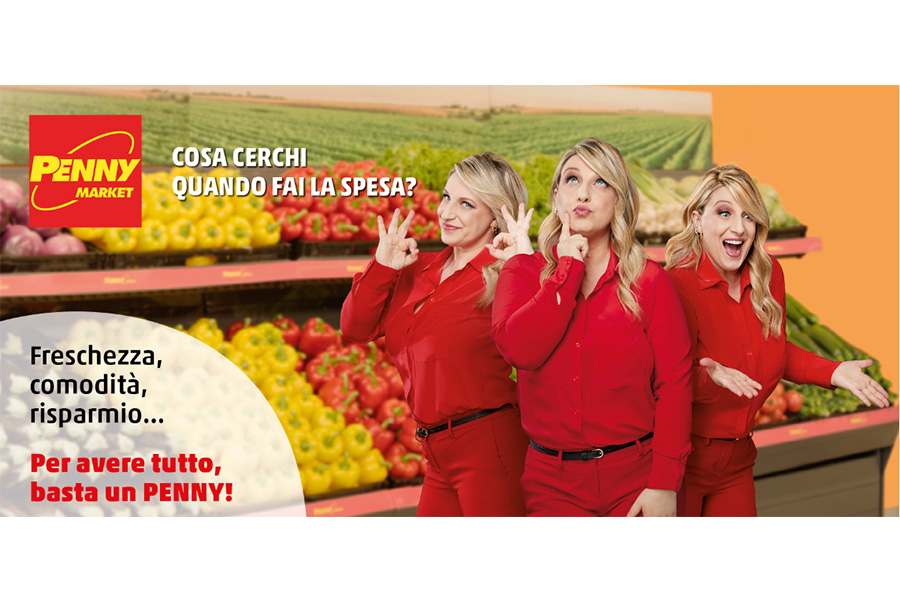 It was a lightning strike between PENNY Market and Katia Follesa.

“In the search for a testimonial, someone who could represent the values of our company, such as simplicity, being close to the Italian spirit and quality, the meeting with Katia was an enlightening encounter; not only the talented actress and comedian but also and above all the person was able to tell PENNY about a passionate and above all “human” approach to business; the same approach that the company has been pursuing for 26 years in our country” – this is how the CEO of PENNY Market, Nicola Pierdomenico, talks about the agreement.

“I already knew PENNY Market as a customer, and I immediately liked the possibility of becoming its testimonial; several ideas immediately came to mind and I wanted, as always, to participate actively in the creative side as well. The work done together with the people at PENNY, the hours spent in the stores, creating all the material, allowed me to be part of the PENNY family in some way, an extraordinary, genuine and absolutely fun team. It was an extraordinary teamwork with PENNY but also with the agencies and production involved and I want to personally thank all those who made this incredible project possible; the result is certainly due to the competence and professionalism of everyone” – Katia Follesa.

PENNY wants to be represented on TV, Radio and InStore communication channels for the essence of its shopping experience. A simple, young, informal environment – at times self-ironic -, aimed at Italian families and which has always valued made-in-italy with more than 70% of products from Italian territory.

The artist, from the Notoria Lab agency’s stable, has proved to be the perfect interpreter; the ambassador of genuineness and simplicity, intrinsic characteristics of the discount channel.

The concept of the campaign is by The Beef agency to which PENNY Market has entrusted what has proved to be an accurate work of strategic analysis and the creation of an original and distinct creative approach. Paolo Spadacini and Paola Spasaro’s agency has set itself the objective of generating a positive, pleasant, empathetic sentiment, linked to the moment of shopping at PENNY, focusing on freshness, simplicity of experience, savings and the Italian character of the products. In order to convey these real and consistent values, a plot has been created to communicate in a friendly, fun and ironic tone, the satisfying experience that every consumer can live in each of the brand’s almost 400 stores.

When it comes to choosing what to buy – this is the story of the commercial – each of us becomes insatiable: we are assailed by fussiness or indecision, we try to match the desire to have the best in terms of quality, freshness, origin of the products, with the need for a certain convenience and comfort, avoiding unnecessary waste of time; and to save, of course. In short, it is as if at the time of shopping we split, or even triple, in many of ourselves, each of which, however, finds satisfaction thanks to the PENNY Market offer. This is the idea that The Beef has entrusted to Katia Follesa’s brilliant interpretation of the plot both on the classic cuts of the 30″ and 15″ TV commercial, digital 10″, and with radio announcements and engaging Long Video 60″ exclusively broadcast on all Mediaset networks.

The commercial created by Art Director Remo Bonaguro and Copywriter Antonio Briguori, was directed by Chris Myhre; the videos are an RTI production for Creativity Media Factory (Publitalia), a Mediaset group company.

A 360 degree communication campaign, offline and SoMe, also on the artist’s GI profile. The plan naturally foresees the airing of the commercial on TV, on Mediaset group channels, with a first 3-week flight of the 60″ long video, from 31 May to 6 June; from 7 to 13 June and then from 21 to 27, the 30″ version will enter the homes of Italians. Further flights during and after the summer are not excluded.

On digital will be the platforms SKY, RAI, MEDIAMOND and DISCOVERY to ensure visibility to the content of the commercial. The radio, PENNY’s favourite channel, will play the audio version of the commercial for the next 12 months. Several national and local radio stations will be involved (Manzoni, Mediamond and Advertising) such as RDS, RISMI, Radio 105, Radio DJ, Radio Capital, Virgin Radio, Norba, Margherita, Discoradio and of course R101 where Follesa is already at home. PENNY FM, the InStore radio station that reaches all PENNY stores throughout Italy, will broadcast not only the commercial but also interviews and in-depth information on this collaboration between the artist and the brand.

So Italian and so close to the people, Katia will in fact also be the moral godmother of the campaign “Abbracciamo le imprese Italiane”, the social responsibility project of PENNY Market in support of the restart of the small and medium Italian companies most affected by these difficult weeks of emergency COVID-19. PENNY Market is close to the territory and feels strongly committed to also contribute to the economic recovery of the regions in which it operates, starting from the small Italian excellences that have made our country great and to which PENNY Market wants to guarantee the opportunity of access to the typical channels of large organized distribution.

← TOYS AT HOME? CAN DO! SANRIO LAUNCHES WEBSHOP →