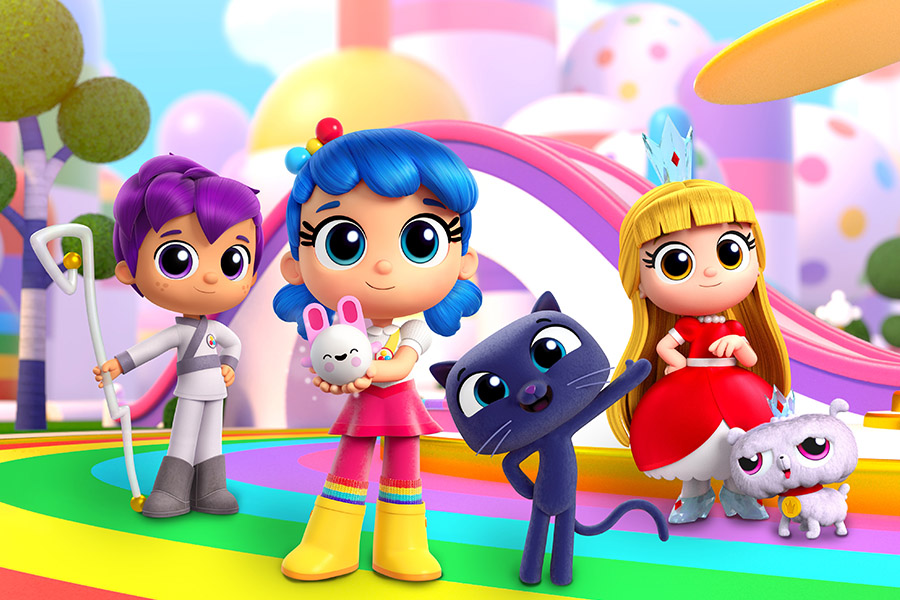 Tags from the story: Guru Studio, Justin Time, True and the Rainbow Kingdom.

Toronto-based children’s content producer Guru Studio is pleased to announce it has signed a number of new international broadcast deals for its hit preschool series True and the Rainbow Kingdom and its two-time Emmy nominated series Justin Time.

The strong lineup of new broadcast partners for True and the Rainbow Kingdom include Tiny Pop (UK), Discovery Family (US), TV Azteca (Mexico), Canal Panda (Portugal & Spain) and NET (Indonesia). Following the successful launch of season one and two on DR (Denmark), Discovery Frisbee (Italy) and RTS (Switzerland), the three networks have quickly acquired the next two seasons. CBC in Canada which already aired the first three seasons has also acquired the fourth season which is set to air later this year.

Key broadcast deals for Justin Time include top partners in Asia such as Tencent (China), Youku (China), and TVB (Hong Kong). AFRTS (US Armed Forces) has also picked up all three seasons.

“Guru is known for great storytelling and for creating shows that deeply resonate with kids and families, and True and the Rainbow Kingdom is no exception.” said Jonathan Abraham, VP of Sales and Business Development at Guru Studio. “The show is performing extremely well around the world, both on commercial and public broadcast, and it’s exciting to see such strong enthusiasm from broadcasters.”

As part of True and the Rainbow Kingdom’s global roll out on linear television, Guru is building a full 360degree marketing program in each territory. The show has very quickly built a dedicated global fanbase with its timely and important message of empowering children to be mindful, compassionate and respectful of all living things. On AVOD platforms such as YouTube and YouTube Kids, True and the Rainbow Kingdom has amassed a sizeable audience with over 260 million views. The show’s Giphy page now boasts over 2 billion shares. Consumer products for True and the Rainbow Kingdom including a line of plush, Halloween costumes, activity books and storybooks are also now available across North America.

Justin Time has aired in more than 138 countries worldwide and has been recognized with multiple award nominations including six Annie’s and two Emmys®.  The series centers on the adventurous Justin and his imaginary pals Olive and Squidgy. Together they travel to every corner of the world, as Justin’s imagination catapults them into larger-than-life adventures set in different points in history. The series draws on the timeless themes of fun, friendship and adventure.