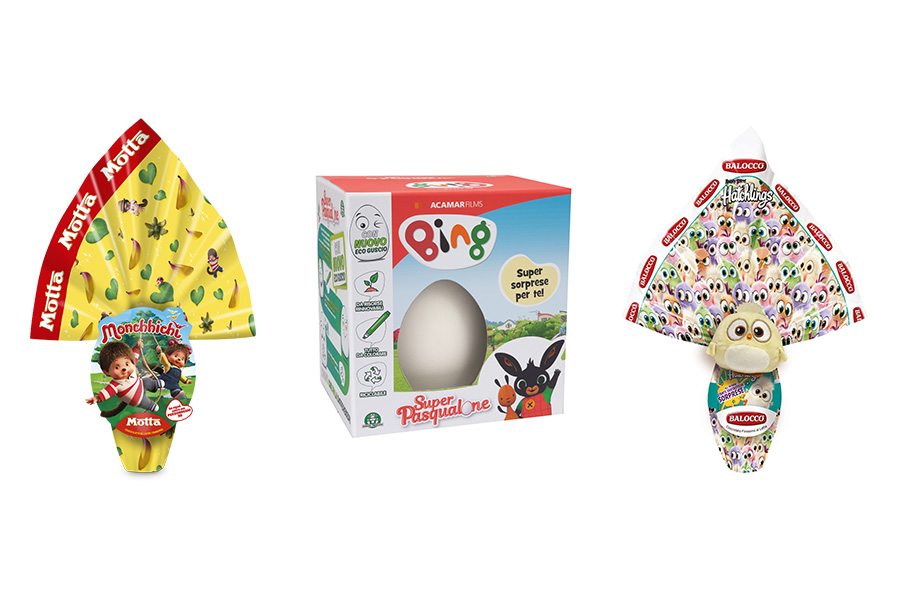 Fans of the popular brands represented in Italy by Maurizio Distefano Licensing (MDL) – both children and adults – can expect a sweet Easter, thanks to a number of well-known MDL licensees in the food and toy fields. The brands include Bing, ZAFARI, ALVINNN!!! and the Chipmunks, Masha and the Bear, Monchhichi, Angry Birds, Hatchlings and Camomilla.

Bing, the animated series that’s a big hit with preschool children everywhere – and which airs every day in Italy on the free-to-air channel Rai Yoyo and pay-tv DeA Junior – has inspired a range of delicious milk chocolate eggs from Dolfin. The much-loved Bing bunny is available in 320 gram, 220 gram and 50 gram formats.

Also partnering with Bing for Easter is leading toy company Giochi Preziosi, which has created a beautiful Pasqualone – a special egg-shaped container with a surprise inside. Its eco-friendly shell has been developed using recyclable material that can be decorated by children and contains a number of Bing surprises, including a plush hat – with Bing ears that move! – a drawing pad and a DVD “ La Macchina delle Sorprese” with specially chosen episodes of the series.

But that’s not all. Dolfin has also produced a ZAFARI Easter egg, inspired by the new animated series based on the adventures of Zoomba, a baby elephant born with zebra stripes who worries about being different until he meets the amazing inhabitants of ZAFARI. Zoomba and his colourful friends have inspired the equally colourful decoration of the Dolfin ZAFARI egg.

There’s also an egg dedicated to another star show among boys and girls, with record ratings on K2 and Nick Junior: Bagdasarian Productions’ ALVINNN!!! and the Chipmunks. Walcor has dedicated an egg to the series whose famous chipmunk heroes have made rock music their mission.

Let’s not forget Masha and the Bear, broadcast every day on Rai Yoyo and loved by children in Italy and around the world. A range of eggs made by Ferrero will allow fans to enjoy a fabulous sweet treat and also discover Masha and the Bear surprises and games.

Monchhichi is an animated series that tells the fantastic adventures of a company of brave little monkeys that guard children’s dreams. Now there’s a Monchhichi egg from Motta for kids to enjoy while they explore the world of Monchhichi and play with and collect the toys and games inside the eggs.

Another MDL property, Angry Birds, is the star of Witor’s Easter offering which highlights the characters from the animated series, whose energetic – and sometimes explosive – personalities have influenced three different packages containing milk chocolate eggs and, of course, surprises for the kids. Balocco, meanwhile, has something for young girls: an egg dedicated to the loveable Hatchlings, the smart little chicks from Angry Birds who have become a hit brand in their own right.

There’s something for grown-ups too. The fashion accessories brand Camomilla is the star of Bauli’s Easter egg. An iconic property from Milan, Camomilla’s pink tones, bows and polka dots have influenced an egg that will appeal to the many girls and women who live for fashion and love.

Maurizio Distefano, President, MDL, says: “Easter is always a busy time for our brands and, despite the challenges it has brought, this year is no exception. We hope these marvellous eggs from our valued partners will bring a little colour and joy to kids and adults over the Easter break.”