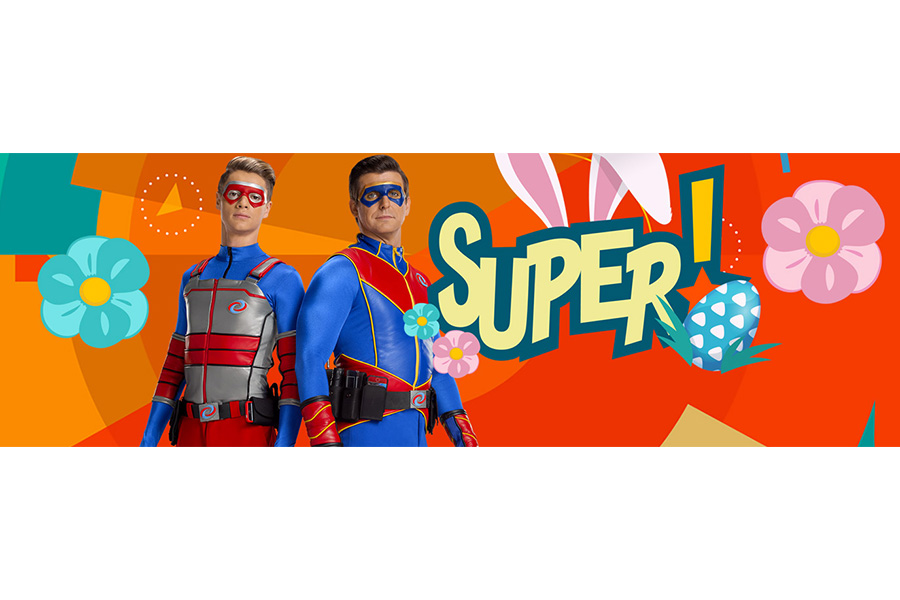 “Henry Danger”, it’s one of Super’s most beloved shows! The new episodes of the 5th season, will be on air from 6th to 21st April from Monday to Thursday at 8pm, only on Super!, digital terrestrial channel 47 and Sky’s 625, we’ll see things never seen before!

In these days Super! asked the guys through the site to imagine to be a superhero like Captain Man and to tell which “Super! Power!” they would like to have.

To date over 500 messages have arrived, the most cited superpower was the teleport, along with invisibility and the ability to read minds. Henry’s hypermotility superpower, which allows him to dodge attacks from bad guys, is also much cited.

Many messages received support the #iorestoacasa campaign and are related to the period and the obvious emergency we are experiencing, it is difficult for the guys to understand a situation that has no precedent and they would like to find a solution.

“Henry Danger”, with his characters and adventures between real world and super powers, fascinates an audience that grew up with the adventures of Jace Norman, who plays Kid Danger, Captain Man’s right-hand man. Henry Hart, a teenager who lives and studies in the city of Swellview with his family, is looking for a job. He then goes to the “Junk’N’Stuff” shop thinking he has to be a salesman and instead he meets the superhero Captain Man, who hires him as an assistant under the name of Kid Danger, on the condition that he doesn’t reveal his true identity to anyone.

In the new episodes of season 5 we’ll see the episode dedicated to Henry’s great kidnapping. And besides, Piper invites Billy, her boyfriend, to dinner with her family and Henry will discover that not only Billy is the brother of Mitch Bilsky, but also of the criminal Jeff!

Also, the appointments with Matteo Markus Bok continue: Wednesday, April 8th at 3.00 pm she will make a new live broadcast on the Instagram @officialsupertv account. The goal will be to feel #LontaniMaVicini. Matteo will have a chat with all Super! friends, involving other creator friends to support the #Vinciamonoi campaign launched with the original song written and sung by Bok “Non ci avrai”. The project supports fundraising for the Red Cross and Italian hospitals in the front line.

#KIDSTOGETHER is the global campaign, also supported at Italian level with the addition of the local message #LONTANIMAVICINI, and is Nickelodeon’s declination of the global campaign #Alonetogether and #iorestoacasa. The initiative promotes positive messages, linked to the respect of the rules and the value to give to the time spent at home, as a space to stay in touch with other people and to rediscover the bond within families. Through hashtags and initiatives differentiated by type and age of spectators, the social campaign confirms – in Italy as well as globally – ViacomCBS’s vocation for quality entertainment, as a vehicle for content capable of interpreting reality and telling people about it, in a spirit of service and closeness.

The contents of #KidsTogether and #LontaniMaVicini, are available on the screens of NickJr, Sky 603, Nickelodeon, Sky 605, Super!, digital terrestrial channel 47 and Sky 625, and also online on all the NickJr, Nickelodeon and Super!