Innovative projects, international partners, a creative studio for cross-media projects in cinema and music, a close-knit team of professionals whose work can range from audiovisual productions to any world where animation can make a difference– this and much more is ForFun Media

ForFun Media is led by Pietro Pinetti and Giorgio Scorza, who have combined their efforts and professionalism, together with the background of their respective production companies, Studio Bozzetto and Movimenti Productions, to create a versatile content factory. It’s a company continually searching for innovative, international content, with potential for commercial development – but it’s also a creative studio for the many ways in which animation can enhance projects.

Based in Milan, ForFun Media has a number of television projects in the pipeline, in development or in production. Many of these also have a licensing programme, which ForFun Media manages directly or together with its partners. The company oversees major B2B entertainment and licensing events worldwide, alongside the main global media factories.

ForFun Media is an important partner in the development of international or cross-media projects. The Milanese factory is connected with DogHead Animation, an animation production studio based in Florence that launched at the end of 2018 as a new part of the ForFun Media group. Its team of over 40 people is currently working on several projects, including the new TV series of Topo Gigio (52×11′).

Here we look at the flagship projects of the group, many of them already in an advanced phase of development. 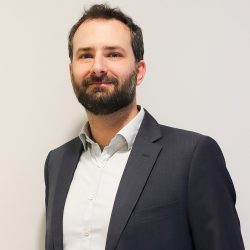 “We are always full of enthusiasm and humbly convinced that determination and love for one’s work are indispensable ingredients for daring to achieve ambitious goals.” Pietro Pinetti, Co-Founder, ForFun Media 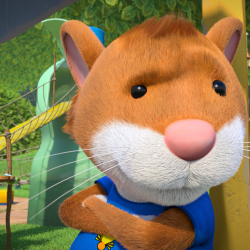 TIP THE MOUSE: Inspired by Dami and Giunti’s best-selling books, Tip the Mouse is a delightful little mouse full of curiosity who lives in a corner of a lawn with his family and friends, experiencing exciting adventures, facing the challenges of everyday life and having lots of fun. The books that inspired the series have sold over 10 million copies and been translated into 32 languages. Among the most successful countries for the character have been Germany, Benelux, Poland, Portugal and France. The TV series is co-produced by Studio Bozzetto & Co, m4eAg, Giunti Editore, Studio Campedelli and Rai Ragazzi. Tip the Mouse has been broadcast on Rai Yoyo since 2014, enjoying a growing audience. The third season, currently broadcasting on Rai Yoyo, will shortly also be showing on DeA Junior. Tip the Mouse is also on Netflix and Amazon Prime. The TV series is distributed in 102 countries, including China, and has been translated into over 40 languages. On the licensing front, the initiative that ForFun Media carried out with Sony Music Italia and with Carolina Benvenga, the popular Italian actress and TV presenter, played a decisive role in the launch of a successful business development programme. In fact, Sony has created a format for YouTube called Carolina & Tip the Mouse Dance With Us, which consists of a series of baby dance videos with the actress and Tip the Mouse; in just eight months they have had over 100 million views! To date, there is a wide range of licensing operations, including Easter eggs with ICAM, and carnival costumes with Carnival Toys, while Publievent takes care of The World of Tip the Mouse events at malls– and of course the costume character. The collaboration with Sony continues, through events at shopping centres with Carolina Benvenga and Tip the Mouse.
Last but not least, Tip the Mouse was also a special guest at Leolandia, the leading amusement park in Italy for children and families. Various forms of social media have a role in expanding the awareness of any property and Tip the Mouse is no different. To date, the property has almost 46,000 followers on Facebook and over 18,000 subscribers on YouTube. 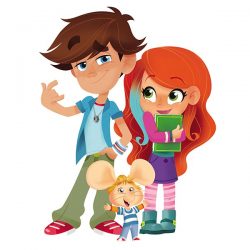 TOPO GIGIO: Another mouse is a leading name in the world of ForFun Media, is close to a television launch and is also looking forward to a major worldwide licensing campaign in the near future. We are talking of course about Topo Gigio, the brilliant creation of Maria Perego, who first appeared just over 60 years ago. Topo Gigio debuted on TV in 1959 and enjoyed immediate success, which quickly took him from Italy to Switzerland and then to London. It was there that he was noticed by an English-language audience and signed up for the most important show in America: The Ed Sullivan Show. Topo Gigio was a guest of Ed’s for years, appearing on the programme an impressive 94 times, winning the hearts of many notable fans, such as Louis Armstrong and Michael Jackson. This international fame took him and his creator around the world, from Japan to Latin America.Over the years, one of the most notable characteristics of Topo Gigio has been his ability to continually reinvent himself, transcending generations and national divides and challenging artistic concepts, while always keeping the unique style that has won the hearts of millions of children and grown-ups around the world.Today Topo Gigio has over 4,900,000 followers on Facebook, putting him just behind Barbie, Mickey Mouse, the Smurfs, Snoopy and Hello Kitty, and ahead of Peppa Pig, Pink Panther and Winx. He also has more than 345,000,000 views on YouTube. Sixty years after his debut, Topo Gigio is back on TV with an animated TV series, produced by Topo Gigio Srl, Movimenti Productions and Rai Ragazzi. It follows the daily adventures of the cute little mouse living in the world of humans, together with his friends. The launch of this eagerly awaited TV series is planned for September 2020 on Rai Yoyo; there will also be a re-launch of Topo Gigio’s social media profiles. In terms of licensing, the roll-out strategy has just begun. ForFun Media has already secured the master toy and publishing partner, which will be soon announced. WildBrain CPLG is in charge of licensing for Italy; the rest of the world is coordinated by the licensing expert Elena Picco. 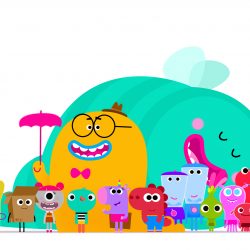 THE GAME CATCHERS: The Game Catchers is another production by ForFun Media, in partnership with the Canadian company Sardine Productions. In a colourful universe populated by all sorts of alien children, the Game Catchers Team goes on a daily mission to explore each planet in the universe, make friends with its inhabitants and discover… their favourite games. The series will be 52 episodes of seven minutes each and is aimed at a pre-school audience. In fact the development phase is just over; ForFun Media plans to start production in May 2020. Kidscreen Summit will be the event where the producers expect to announce all the partners on board with this project. 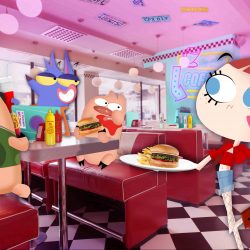 SPOOKY WOLF: Another project in the development phase is Spooky Wolf. The partner for this brand-new TV series is the leading French studio Millimages, known for the global success of Molang. The production phase should begin by autumn 2020. The TV series is about a detective wolf, Spooky Wolf, who solves mysteries in Fantaville and faces weird and crazy criminals together with his loyal buddies – the Three Little Piggies and Cherry the Teen Little Red Riding Hood. The format is 52 episodes of 13 minutes each; the show is aimed at kids from six to nine years old. 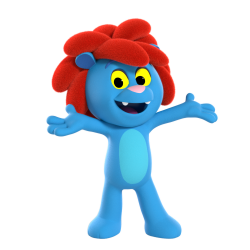 PEEKABOO AND THE ADVENTURES OF LEO AND MIA: A very original project in the portfolio of ForFun Media, this is a show co-developed together with the major Italian amusement park Leolandia to bring to life its mascot Leo, his friends and his adventures. The result is a new 3D TV series of 52 11-minute episodes aimed at girls and boys aged three to six. 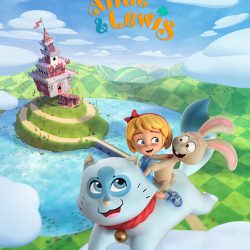 ALICE & LEWIS: Co-produced together with Blue Spirit, the launch of Alice & Lewis is planned for summer 2020. It’s a new take on the Alice in the Wonderland story in which six-year-old Alice has found a magic key that leads her to Wonderland. In this ‘other realm’, she meets an endearing rabbit, Lewis, and the two become fast friends. Each episode involves a visit to Wonderland, where Alice experiences a wacky adventure with Lewis, coming face to face with the crazy, eccentric rules and conventions that reign supreme in this parallel kingdom. The licensing programme will be launched at the next Bologna Licensing Trade Fair by RaiCom in partnership with ForFun Media. 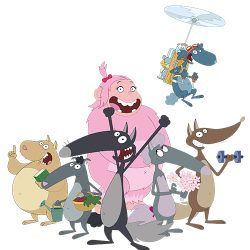 THE WOLF (LE LOUP): The Wolf is based on the successful series of books Le Loup, by the French publisher Auzou. The first series, co-produced with Samka Productions, is on air in Italy on Rai Yoyo; a second season is already in production. Lupo is a surprising hero, charming and full of imagination, and has captivated his young audience with his entertaining personality and the comic situations that he gets into in each episode.

CROSS-MEDIA PROJECTS: ForFun Media is planning a line of development which, starting from animation, aims to develop an extended approach to brand identity and the enhancement of IP. The initiatives that the group has developed, both as producers and as an animation and creative studio, can be seen in this context. With a vision of expanding cross-media use, the studio has developed animation and special effects for the virtual 3D exhibition and live video at the Italian edition of the X Factor for the young Italian music star Tha Supreme. The studio is also working on a video clip to be released in February 2020 and a subsequent roll-out, which will cover live concerts and other initiatives. Another interesting initiative is the collaboration of ForFun Media with Inlusion vfx, Tao Due and Luca Medici for the animated video clip that closes the successful Italian film Tolo Tolo, where the live action is combined with an animated story – Mary Poppins style – featuring the satirical and irreverent Checco Zalone, lead character of the film. The show, The fire witch, conceived and created for Gardaland, also works across a number of formats. It is a live show with added special effects, which earned it an award for Best Outdoor Show of the Italian Theme Parks. 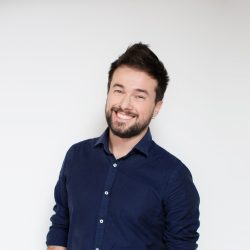 “Animation as a language is not only our creative ambition but also an unexplored – or only partially explored – heritage and market in Europe.” Giorgio Scorza, Co-Founder, ForFun Media

FOR THIS AND MUCH MORE, READ THE LATEST ISSUE OF LICENSING MAGAZINE

A KEY PLAYER WITH A STRONG REACH