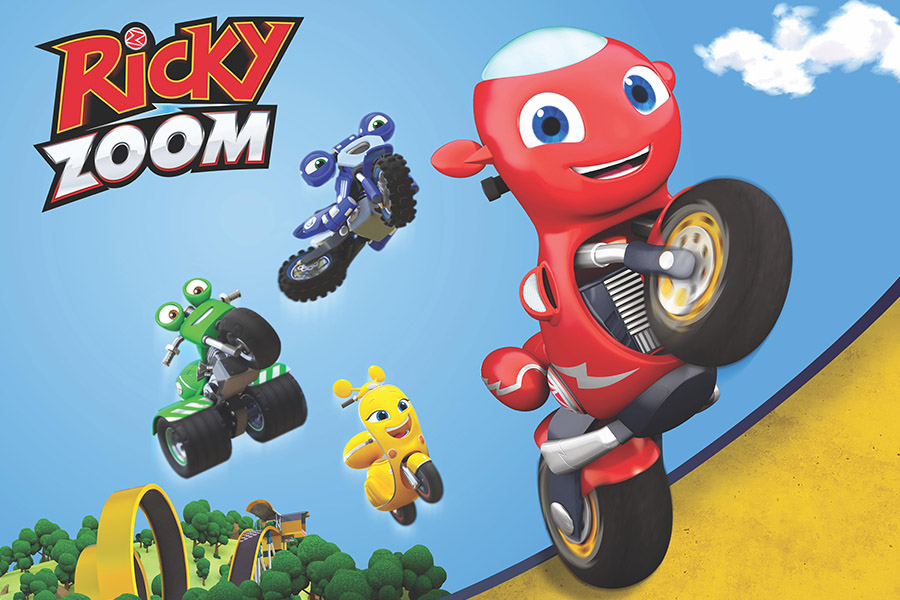 Tags from the story: Entertainment One, eOne, Ricky Zoom, TOMY.

Entertainment One (eOne) celebrates strong ratings for series one of Ricky Zoom, as consumer products prepare for launch at retail

Entertainment One (eOne) is continuing to fuel its international smash hit Ricky Zoom with news today that a second series of 52×11 min episodes are zooming into production and will be on screen as soon as November 2020.

Since its debut at the end of 2019, Ricky Zoom has raced to success achieving outstanding ratings in multiple markets and across several platforms. It is currently a top 5 preschool show with boys on Nickelodeon in the US, #1 on Nick Jr. commercial kids’ channel in the UK, and the #1 show on Clan in Spain. From their weekend line up, Ricky Zoom is a top 3 show on Treehouse in Canada and consistently outperforms channel averages on RAI in Italy and across the LATAM region. Ricky Zoom’s appeal also resonates in China where the series has garnered an impressive 425+ million views on streaming platform, YouKu.

It’s clear that fans across the globe relate to eOne’s original all-bike show for pre-schoolers. The property’s growing popularity was evident in the outstanding response to its first app, Welcome to Wheelford, which has been downloaded more than 4 million times globally since its release in August 2019.

“We are so proud of Ricky Zoom and its success to date. It is premium original content produced by the very best talent and our strong roster of international broadcasters has super-charged the series to a high level of awareness around the world,” said eOne’s Olivier Dumont, President, Family & Brands. “We are very excited for the potential to explore even more ground in the second season. There are so many more stories to tell that will deepen the connection between the characters and our audience and we look forward to bringing them all-new adventures.”

In the wake of the outstanding broadcast success, eOne is readying the launch of the first wave of consumer products in key territories which will be led by the launch of Ricky Zoom toys from global master toy partner Tomy, including six key product skus across a variety of price points focused on core characters, Ricky and his Bike Buddies. The collection will roll out in multiple territories this spring.

The toy launch will be followed by a limited range of secondary category product launches to meet consumer demand in 2020, including publishing, puzzles and games, arts and crafts, apparel and accessories with additional secondary launches planned throughout 2021.

← A NEW SERIES: PRESTO! SCHOOL OF MAGIC FIND ME IN PARIS: SEASON 3 →