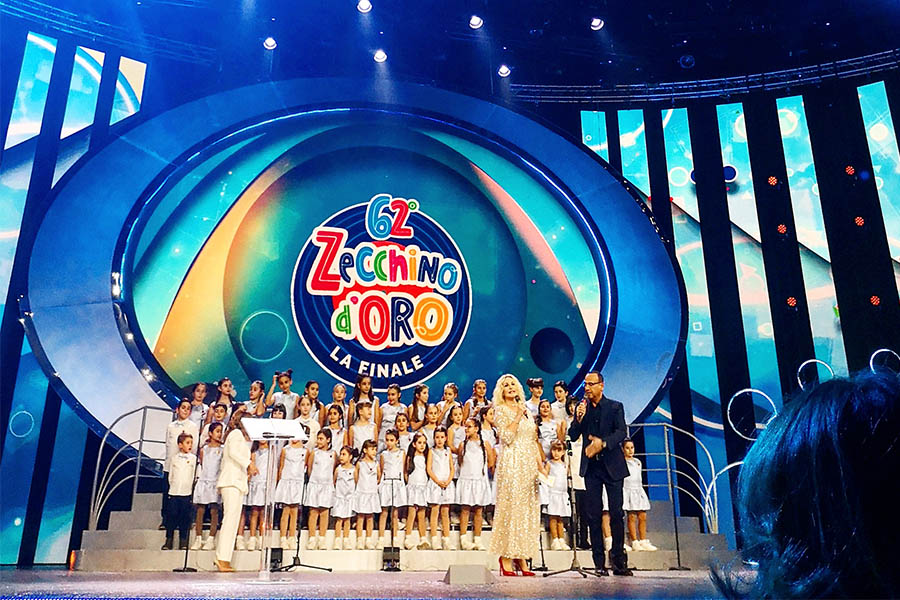 The 62nd edition of the Zecchino d’Oro saw the great return of the final in prime time on Saturday, on Rai Uno, with two exceptional presenters: Carlo Conti and Antonella Clerici.

The journey towards the live broadcast of December was articulated, along the whole peninsula, from March to August, involving and giving visibility to the most important Shopping Centres and Municipalities of Italy. The numerous stages of the Tour were attended in many, about 4,000, the number of all children who took part in the Casting Tour, which thanks to Wobinda and his creative instinct, has touched 44 cities for a total of 50,000 km covered.

The soloists were chosen after the selection project signed by Antoniano of Bologna in collaboration with Wobinda Produzioni, and after the different selection phases, they performed on Rai 1 on 4-5-6 and 7 December 2019, giving voice to the 12 songs unpublished in the race this year.

The aim of the Zecchino d’Oro Casting Tour is to find the “right” interpreters for the songs in the competition; we are looking for the personality, the age and the voice that can give life to the songs of the current edition and that is why, the Zecchino d’Oro, has been recognized by UNESCO as a World Heritage Site for a Culture of Peace and its repertoire of songs, dedicated to children, is famous throughout the world.

Not only selections but entire days dedicated to families to meet and share the joy of music that becomes daily bread, enriching some stages of the Tour with Live Shows, opportunities for real entertainment for young and old. The shows are an exciting moment for the cities and towns that host them, a mix of fun and cheerfulness in the name of singing and dancing where children perform; in fact, there are also choral performances of ensembles of white voices belonging to the Galaxy of choirs affiliated to the Antoniano of Bologna and small protagonists of past editions of the Zecchino d’Oro.

The Zecchino d’Oro Casting Tour, organized and realized by Wobinda Produzioni, is waiting for you from February 2020 in the main shopping centers and municipalities of Italy; participation in the selection is completely free and aimed at all girls and boys between 3 and 10 years.

Wobinda Produzioni organizes Casting Tours linked to important Format Tv, a unique and winning formula of live entertainment, has reconfirmed its ability to attract and involve the public and to promote brands and products, increasing their prestige and their diffusion.