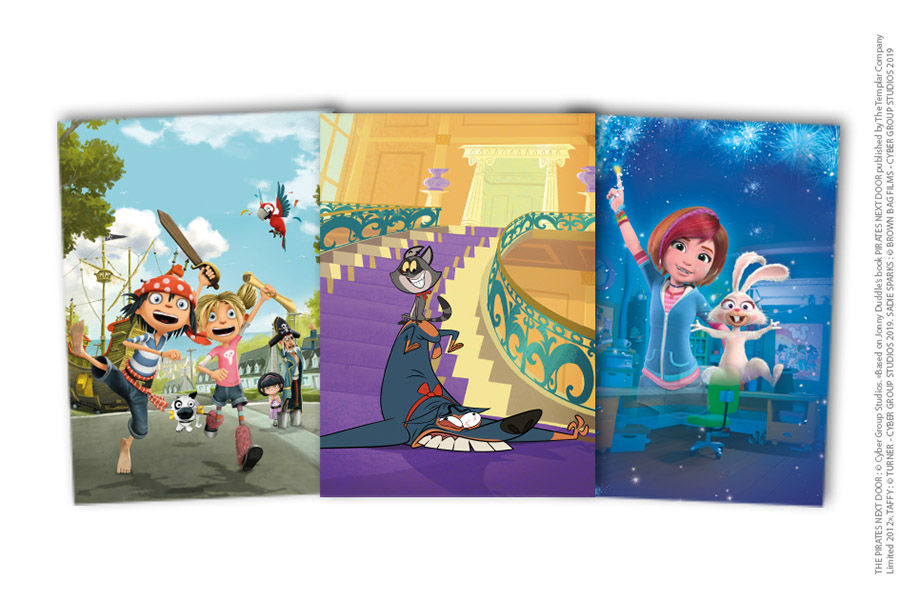 The deal to develop mobile and PC games for hit series Taffy, Sadie Sparks and The Pirates Next Door

Under the terms of the agreement, BTC Studios PLC will develop interactive software games based on Cyber Group Studios’ catalogue hit series: Taffy, Sadie Sparks, and The Pirates Next Door.

“We’re very excited to be working with BTC Studios PLC to provide new experiences on our 3 successful TV series, Taffy, Sadie Sparks, and The Pirates Next Door,” said Thierry Braille, VP Interactive and Video Game division, Cyber Group Studios and and Dominique Bourse, COO, Cyber Group Studios. “BTC Studios PLC is an established player in the game market and has managed to concentrate a very strong group of talents to produce powerful games on our TV series.”

“We share excitement with our partner – Cyber Group Studios to kick off this high-potential project. We have already started production of the first two mobile games: Taffy: Feed the Kitty and Taffy’s Food Run. Within the next six months, we will start development of the next games, according to the agreed pipeline, as well as the broadcaster’s publishing schedule. The first commercialization is scheduled for the second quarter of 2020.” – said Jaroslaw Zeisner, COO, BTC Studios.

Taffy, the 78×7’ HD – 2D slapstick comedy series based on an original creation from Cyber Group Studios and developed with Turner, is already a worldwide success on Boomerang. The series is now airing on Disney (Germany) and will soon launch on France Télévisions (France).
Nominated for The Best Kids Short Award by TAAFI Festival (TorontoAnimation Arts Festival International 2019), the series, which is the first Boomerang original, follows the non- stop slapstick extravaganza faced by loyal hound dog Bentley, when his billionaire old lady owner Mrs. Muchmore takes in Taffy, a raccoon imposter posing as wide-eyed, fluffy angora cat.

The series, which is aimed at children aged 6 to 10 years old, has been selected to be screened at BAFTA kids Festival (London – United Kingdom) and selected to be part of the International Panorama TV Series in the Kids category at Cartoons on the Bay – Pulcinella Awards (Italy).

Sadie Sparks follows the daily life of a teenage girl who discovers that she has extraordinary powers. Unfortunately, such powers can only be harnessed in partnership with an ancient and extremely grumpy magical rabbit called Gilbert, who just wants to retire.

The Pirates Next Door, 52×11′ HD – CGI, comedy series produced by Cyber Group Studios for France Télévisions, is based on the best-seller by Jonny Duddle, winner of the United Kingdom 2012 Waterstones Children’s Book prize. The series follows the daily life of a family of pirates who settles in a tiny seaside town. The series is already a worldwide success as it has been sold to over 100 countries and has been acquired by a large number of key broadcasters including: Clan (Spain), WDR / KIKA (Germany), RAI (Italy), NRK (Norway) and SVT (Sweden).

This humor and action-packed adventure comedy series has been officially selected by the Chicago International Children’s Film Festival– CICFF (USA) in the Animated TV / Animated Production category and has been screened at MONSTRA 2019 – Lisbon Animation Festival (Spain).