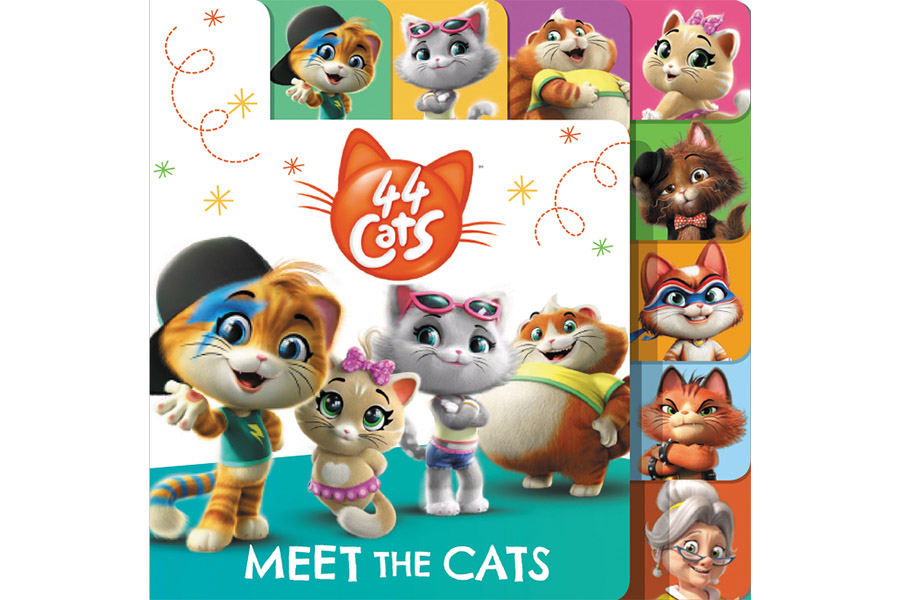 44 Cats, produced by Rainbow Group and airing on Nickelodeon, is expanding its publishing program in North America with board books, storybooks and early readers form HarperCollins Children’s Books.  The license brokered by The Joester Loria Group and Branding Stream for the USA and Canada.

HarperCollins Publishers, one of the largest consumer book publishers in the world, has an impressive portfolio of the top children’s brands. HarperCollins will release 44 Cats: Meet the Cats featuring the Buffycats – Lampo, Milady, Pilou and Meatball – the lead characters in 44 Cats, in March 2020.

“We are very excited to be partnering with Rainbow for a robust publishing program that we hope will entertain and delight 44 Cats fans everywhere. These cats are poised for success in our tried and true formats for preschoolers. The power of the 44 Cats brand grows stronger by the day and the character’s global appeal will be sure to keep these cats in homes (and stores) for a long time.” –Alexandra West, Associate Editor for HarperCollins Children’s Books

44 Cats television series in the United States debuted on June 10th, on the Nickelodeon channel and is in frequent rotation on Nickelodeon, Nick Jr. and Nicktoons. Daily Canadian Broadcasting is launched on Yoopa (French-speaking) and on Treehouse with airings weekdays and on YTV during weekends (English-speaking).

The series debuted in November 2018 and is enjoying tremendous popularity throughout the world, with a second series already in production. The 52 x 13’ series is an explosive mix of music and cuteness that deals with edutainment themes such as tolerance, diversity and altruism, combining positive values, action and comedy in a sophisticated CGI production. The show, which appeals to preschoolers and children aged 4 – 7, follows the adventures of Lampo, Milady, Pilou, and Meatball – four adorable kittens who are part of a music band named The Buffycats – helping others and always finding creative solutions to everyday hitches.

The licensing programs are managed by licensing agents, The Joester Loria Group in the United States and Branding Streams in Canada.

← LITTLE PEOPLE MEETS FROZEN BACK TO SCHOOL WITH ANIMAL PLANET →