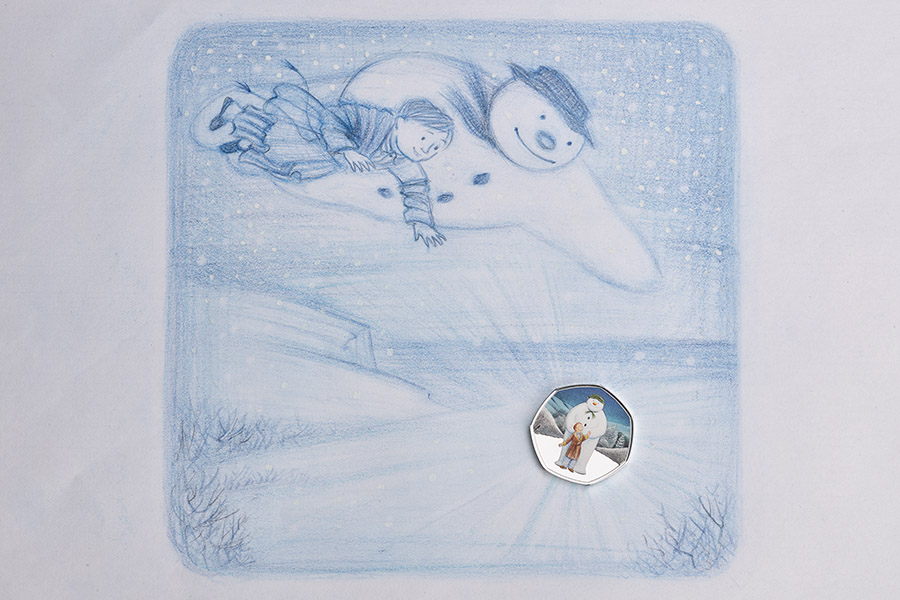 Tags from the story: Penguin Ventures, The Royal Mint.

The Snowman flies onto UK coins for a second time

The Royal Mint, together with Penguin Ventures (part of Penguin Random House) has announced that it will be releasing a second coin in The Snowman series. This special 50p coin celebrates the charm of Raymond Briggs’ timeless children’s classic.

Taking inspiration from the original hand-drawn book illustrations, The Snowman coin features James and The Snowman about to fly off on their magical adventure to the North Pole. The coin showcases the snowy scenery surrounding James who looks up at The Snowman with excitement as they embark on their journey.

Working in partnership with Snowman Enterprises, we enlisted the help of award-winning animator and illustrator Robin Shaw, Assistant Director of The Snowman™ and The Snowdog, the sequel to the original animated adaptation of the book, to illustrate the coin.

Nicola Howell, Director of Consumer at The Royal Mint commented: “Following the fantastic response to The Snowman’s debut appearance on a 50p coin to celebrate the 40th anniversary of Raymond Briggs’ classic tale in 2018, we are delighted to introduce the second coin in the series capturing James and The Snowman’s friendship. Over the past few years, the Beatrix Potter, Gruffalo and Paddington collections have been extremely popular, and we believe the second Snowman coin will be equally as successful. This particular coin, continues the story and focuses on the next step of The Snowman and James’ magical journey.”

Thomas Merrington, Creative Director at Penguin Ventures said: “We’re delighted that The Snowman will once again appear on a commemorative coin for the second year running, following the success of the 40th anniversary edition.  Our enduring partnership with The Royal Mint has seen a series of classic children’s characters featured on British coins, offering collectors and fans of the original stories, a perfect keepsake to treasure.”

In addition to the new coin, The Royal Mint is also launching a limited edition Minty® piggy bank which will feature a special Snowman™ design. With just 250 piggy banks available this exclusive contemporary design adds a modern twist to the traditional piggy bank and retails at £95.

Prices for The Snowman™ coins will be available from www.royalmint.com/snowman. This is a commemorative coin and will not be entering circulation, so this is the only way to own this special coin.