THE FASHION NEWS OF MDL PRESENTED AT BLE

Maurizio Distefano Licensing, for the second consecutive year, was present at booth E183, dedicated to the agency, the BLE. This year’s brand focus was certainly Bing, Masha and Bear, ZAFARI, Gigantosaurus and Kit’n’Kate, but also other important brands in the agency’s extensive portfolio were not outdone.

In addition, the BLE was an opportunity to present a new division for the agency, which deals with the brand extension of high fashion brands: PREMOLI + DI BELLA, Filippo Laterza and Stefano Cavalleri. 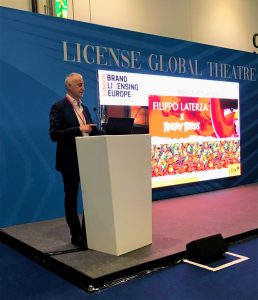 Bing is a huge pre-school success in Italy. The stories of Bing, his friends and how he lives the world around him, produced by Acamar Films, have clearly stolen the hearts of young Italian viewers and their parents, with 15 episodes a day on Rai Yoyo, regular programming on DeA Junior and a strong presence on social media. MDL has already signed a series of important licensing agreements for Bing, including the one with Leolandia, which dedicated a show to Bing at the park.

After only three seasons, the last of which was premiered on Rai Yoyo this summer, Masha and Bear is a real classic for children and continues to attract a large audience on DeA Junior and Rai Yoyo, thanks to the new episodes. The success of the property is reflected in the huge dedicated area of Leolandia, in the numerous promotional partnerships and, of course, in the flourishing licensing campaign.

Co-produced by ZAFARI Holdings and DreamWorks Animation Television and distributed worldwide by NBCUniversal/Dreamworks, ZAFARI, the story of a group of rather unusual animals living in a valley near Mount Kilimanjaro, has been broadcast since June in Italy on Rai Yoyo. For an audience of children aged four to nine, ZAFARI celebrates differences and friendship through captivating characters and high quality production. MDL, in a very short time, has already signed a number of licensing agreements with important companies for this promising property.

Gigantosaurus is a new action-comedy series in CGI that follows the adventures of four young dinosaur friends as they explore the world and try to find the Gigantosaurus, the biggest and fiercest dinosaur of all. Themes such as fun, friendship and dealing with fears make this series very suitable for partnerships in different categories. The episodes have been broadcast in Italy and around the world on Disney Junior since last January. Gigantosaurus has already inspired a line of puzzles by Clementoni and bicycles by Dino Bikes. A line of toys and a video game are coming soon.

Kit^n^Kate is a cartoon for preschoolers full of fun, adventure and important educational messages embedded in each episode. The series is currently broadcast in multiple territories, in Italy on Rai Yoyo and online. In addition to the publishing partner that will be announced shortly, MDL has already signed two licensing agreements for Italy, with Edizioni Playpress, which will develop a line of activity and coloring books, and Multiprint, with their set of stamps.

And now we turn our attention to the Fashion brands:

PREMOLI + DI BELLA is a volcanic brand created by Giovanni Premoli and Dario Di Bella, a multifaceted creative couple. Creative directors for clothing, accessories, luxury goods and collections for men and women, with a strong background in the world of luxury fashion, textiles and clothing. They are creative, young, socially aware, attentive to the luxury of Made in Italy and international.

BLE has dedicated to PREMOLI + DI BELLA the Fashion Activation at the entrance number 5: on display some creations of their prestigious collection Home Linen licensed to Mirabello Carrara combined with some magnificent outfits.

MDL, as WW master agent for the brand, has just appointed an agent to develop the licensing project for the US market.

MDL manages the rights for the talented young Italian designer Filippo Laterza, defined by the international press as the new “enfant prodige” of fashion. Born in 1995, he grew up in a family of tailors and the world of handmade fabrics and garments was his home from an early age. After his debut at Altaroma in 2017 with the haute couture collection, the 20-year-old designer conquered the most prestigious catwalks in the world, from Asia to Europe, winning numerous awards. Many celebrities and influencers around the world love the unique style of Filippo Laterza’s clothes.

At BLE there was a magnificent Filippo Laterza dress themed Angry Birds, one of the first co-branding experiences of the young designer.

MDL manages the WW rights of Stefano Cavalleri, considered the founder of high fashion for children in Italy and recognized worldwide. Founder of I Pinco Pallino, a well-known children’s brand with a very famous history, he has more than 40 years of experience in fashion as Creative Director for the Cesare Paciotti, 1950, and AM66 brands. Stefano Cavalleri wanted to rely on MDL to give him the opportunity to use his name, his prestigious experience to create new interesting collaborations.