Independent content creation and distribution company Epic Story Media Inc. (ESM) has signed an agreement to develop transmedia content for DHX Media’s internationally successful property Slugterra, including new animated ‘Slugisodes’ and a live action competition game show, based on a new location-based VR game which is being launched later this year, as well as launching a new mobile game for the property. 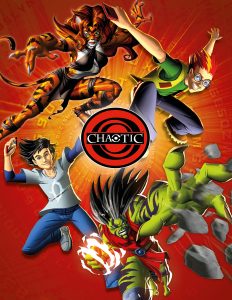 Additionally, Epic Story Media has been developing the franchise plan for the reboot of Chaotic. Following the historical success of Chaotic in Latin America, ESM has appointed Televix Entertainment to handle broadcast sales for the sci-fi/action television series in the region. Both properties will be part of the Epic slate showcased at Brand Licensing Europe and MIPCOM this month.

ESM will announce new broadcast and streaming deals and more plans related to Chaotic later this year. The newly signed deal with Televix will see the distributor bring the show back to broadcasters and the growing digital platforms in the region.

The new animated action comedy ‘Slugisodes’ (20 x 5’) is currently in development with DHX Media. The 2D animated shorts are targeted to launch in 2020, including on YouTube, managed by DHX’s WildBrain. Through a non-dialogue serialized arc, the ‘Slugisodes’ will feature the Slugs from the hit international show, as well as introducing new Slugs and locations. Additionally, ESM is developing a line of limited-edition premium collectibles for Slugterra and is celebrating hitting 1.5 billion views for the property on YouTube. Epic Story Interactive, a subsidiary of Epic Story Media, is also developing its fifth Slugterra mobile game set to launch in Q3 of 2020. This will be the seventh mobile game for the franchise which now has a combined total of 40 million downloads globally.

Based on the new Slugterra VR game from Dark Slope Studios, ESM is also developing a new live action game show on behalf of DHX. The Slugterra VR game, is set to be released by HOLOGATE in Q4 2019, is a location-based multiplayer VR game and will be featured in up to 250 Hologate locations around the world. The new game show in development will see kids compete against each other in a Slugterra VR tournament.

Ken Faier, El Presidente and Founder of Epic Story Media says: “We are very excited about continuing to build on the successes of Slugterra and Chaotic – both great properties with devoted fan bases hungry for gaming, toys and content. Fans are on 24/7 and we are working to find innovative ways they can enjoy interacting with these characters and story worlds in new realms.”