Already a hit in Asia and the USA, the Japanese character brand Rilakkuma is now making inroads into the European market and is expected to attract strong interest at BLE.

Rilakkuma is a kawaii – or ‘cute’ – teddy bear character, created in 2003 by San-X, one of the largest character manufacturing companies in Japan, which has created and marketed a number of successful kawaii characters. 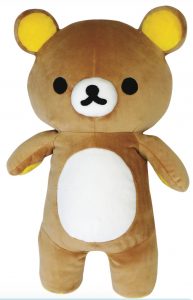 Rilakkuma’s name – a combination of the word ‘relax’ and the Japanese word for ‘bear’ – sums up this cool character. Rilakkuma loves music, watching TV, hot baths, food and being lazy. This bear is a stress-free zone with a 100 per cent positive outlook on life. But is it a boy or girl bear? In fact is it really a bear? In a rather ingenious touch, Rilakkuma has a zipper on its back. The bear look, it seems, is a costume. But what’s underneath? No one knows…

The character’s relaxed approach to life has made Rilakkuma and its friends, such as Korilakkuma and Kiiroitori, stand out among kawaii brands. In fact today Rilakkuma is second in popularity in Japan only to Hello Kitty. Its core market in Japan is women from 20 to 40 years old. In Europe, there will be a wide target market, including parents with young children, 8-14-year-old girls, and all fans of Japanese culture.

This gentle, good-humoured and exceptionally relaxed character has already inspired numerous licenses, collaborations and character cafes across Japan, the US and Asian countries. Supported by a comprehensive style guide, Sagoo now aims to emulate this success with Rilakkuma in European markets.

Rilakkuma is already celebrating some major partnerships in Europe, working with some of France’s most creative names in kids’ fashion and appearing in some of the trendiest parts of Paris. Rilakkuma and friends have also inspired a (recently expanded) range from Cijep Plush, a blackboard book (in the shape of Rilakkuma’s face) from Larousse and, also from Larousse, a number of children’s activity boxes offering kids opportunities for colouring, cutting, glittering and tying. There’s also a Rilakkuma baby album from Editions First in which to keep small souvenirs or write down memories of baby.

This popularity is expected to grow, especially with the recent arrival of a stop motion animated 13×11’ show called Rilakkuma and Kaoru as a Netflix original series in more than 190 countries around the world.

With awareness of Rilakkuma building fast across European licensees and consumers, Sagoo will highlight Rilakkuma at BLE because fells this is an ideal time to spotlight the character and its enormous potential.

Veronique Pichon, President, Sagoo, says: “Having gained a dominant position in Japan as one of the most popular kawaii characters on the market and inspired numerous licensed products, Rilakkuma is now building a strong following in Europe. We are sure there will be a lot of interest in this very relaxed bear on stand A320.”

PITTI ANNOUNCES THE NEW DATES OF ITS SALONS