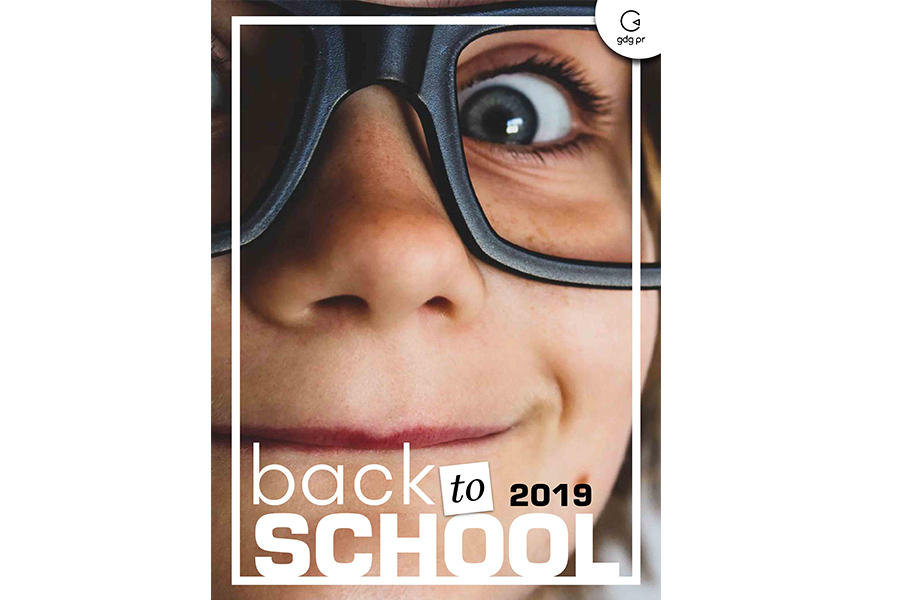 THE BACK TO SCHOOL OF GDG PR

Summer has exploded, but GDG PR is already thinking about getting back to school!

Here is a selection of autumn 2019 products for the GDG PR Back to School: 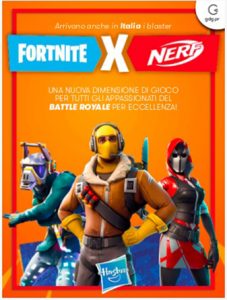 We start from Hasbro with the new Back to School line by Nerf dedicated to the videogame Fortnite, a global cult phenomenon (so much so that the world champion recently won 3 million dollars at the age of 16!). From the virtual game to the everyday game in a blaster throw: Hasbro and Epic Games realize the dream of millions and millions of fans around the world. Videogame and toy come together and the legendary Battle Royale loved online takes shape in reality, just take a blaster Nerf Fortnite. More than 250 million players around the world, with a jackpot of as much as $100 million for the current competitive season. It’s Fortnite, the record-breaking video game, the most played and discussed ever, a real global phenomenon. Now their dream can finally come true: Hasbro and Epic Games, in fact, announce the arrival of the highly anticipated collection of Nerf blasters dedicated to and inspired by Fortnite. And the Battle Royale from digital becomes real: all the real fans of Nerf and Fortnite will be able to play live wherever they want, experiencing the incredible thrill of really holding the much-loved blasters from their favorite video game. Available from September, the brand new Nerf Fortnite line is made up of 5 blasters. Models, shapes and images are practically the same as the video game version. The absolute top is the AR-L, the perfect Christmas gift for every true self-respecting enthusiast: equipped with a foldable precision viewfinder, it is the only automatic and motorized blaster that boasts a 10 out of 20 darts magazine available in the package. The other must-have is undoubtedly the mammoth TS, especially as it can throw 4 Mega darts one behind the other. Even the legendary HC-E blaster is equipped with Mega darts, they are 3 and can be thrown with a single shot. The beauty comes with the RL, the first and only missile launcher blaster: the design is really identical to the original, a faithful reproduction of the epic alter ego made of pixels, images and details included. 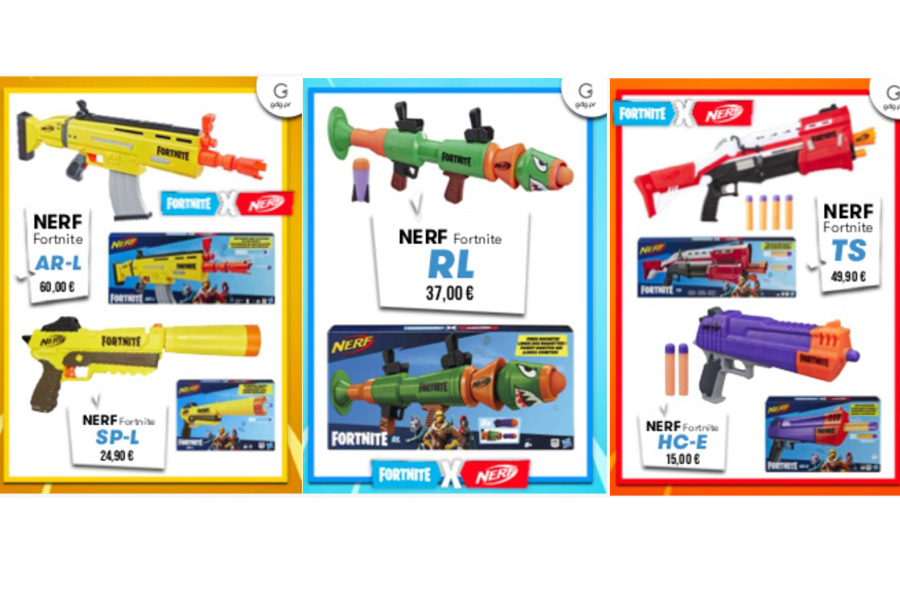 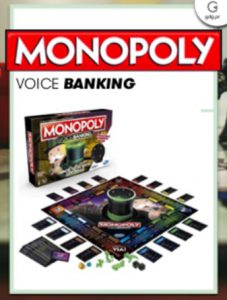 Great news also at Monopoly with the brand new Voice Banking, the first and only one with voice commands and fully digitized. A true technological innovation in the world of canned games. The world’s most famous bargaining board game leaves cash and credit cards behind for voice commands. Mr. Monopoly interacts with you and guides business along the board to victory! The most technological back to school ever. 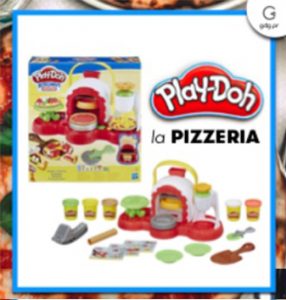 For children, Play-Doh offers new sets really “greedy”, the new play set dedicated to all the small pizza makers in the grass is composed of the reproduction of a wood oven ideal for baking your creation of dough to model. Enriched with many accessories allows you to play with many ingredients to create delicious pizzas. 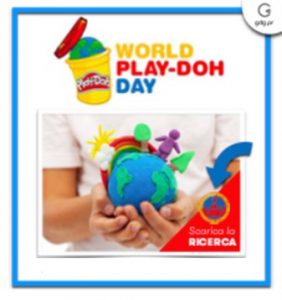 Creativity and learning go through manipulation because it allows you to “learn by playing”: to confirm this is a study of the Catholic University of Milan. The little ones understand how to plan and organize their ideas, optimizing time and also improving motor coordination. The appointment to discover it live is Monday, September 16th: the whole world celebrates modelling pasta par excellence with the World Play-Doh Day and in Italy Creativity Day is celebrated with events in different schools of the peninsula. 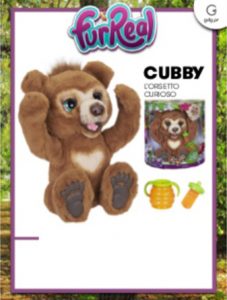 The new friendly friend of the Fur Real line is a soft and curious teddy bear. He interacts with the child reacting to the tickle, embracing and singing sweet melodies for bed. He is also fond of his honey, he loves to drink it from the special bottle provided and his favorite game is the hide-and-seek. Cubby will be the best friend of all children!

Carrera Toys is no less with its selection of vehicles and motorized tracks inspired by the world of Nintendo and beyond, the tracks for aspiring drivers are also dedicated to the properties of the moment, such as Cars and Paw Patrol along with the iconic Mickey Mouse. For a roaring Back to School!

Young novice drivers will be able to unleash their competitive instincts with the small ‘Carrera First 1. DisneyPixar Cars’. A track designed specifically for those who have not yet consumed the trains of tires necessary to ply the fastest tracks of the wide panorama of signed tracks.

Paw Patrol’s Chase and Marshall are ready to whizz around in their iconic cars! Three different tracks, each with its own peculiarities. There’s the “On The Track” track with two big hairpin bends, the “Track Patrol” track with two long straights and the “Race ‘n’ Rescue” track with a very funny chicane! Each of the three tracks includes two Paw Patrol slotcars and special Spinners.

Mickey Mouse and Donald Duck together for an adventure aboard fast roadster cars! An eight-course track with dizzying turns and fun spinners, or a track with two long straights and a finish line with rotating signs. Two slotcars with special livery dedicated to the beloved Disney characters!

Even young video game fans can live the adventures of Mario Kart thanks to their room with the Carrera First! Available with Mario and Luigi, or with Mario and Yoshi, the track is 2.4 m long. Pure fun and adrenaline for budding drivers!

Mario and Luigi set off on board Kart Mach 8! With the special yellow and blue livery, these two remote-controlled Mario Kart cars can reach 9 km/h! The new design of Mach 8 in blue and yellow is identical to that of the video game, the racing cars in the shape of a turbine are suitable for small fans of Mario from 6 years up and thanks to the full-function technology, are easy and fun to control!

On board his scooter Mario is unstoppable!
And thanks to his success on Nintendo Switch with Super Mario Odyssey, he arrives in the children’s bedrooms aboard the iconic yellow wasp! The scooter can reach a top speed of 9 km/h and also has front and rear lights for maximum visibility both during the day and at night.

Nintendo’s new releases are the Nintendo Switch Lite system and the videogame The Legend of Zelda: Link’s Awakening

This new gaming system from Nintendo is designed for mobile gaming. Compared to the top-of-the-range Nintendo Switch, it’s more compact and has integrated controls, making it perfect for the little ones who like to carry their games with them at all times. Nintendo Switch Lite will be available from 20 September in three colours: yellow, grey and turquoise.

The Legend of Zelda: Link’s Awakening

Twenty-six years after its release, the Game Boy classic The Legend of Zelda: Link’s Awakening is reborn on Nintendo Switch. Shaken by a terrible storm, Link is shipwrecked on mysterious Koholint Island. To get home, you’ll have to go through dangerous dungeons and face fearsome monsters. This new version of the adventure includes many of the unique elements from the original Game Boy game, such as 2D platform-style rooms and character cameos that are not part of the Legend of Zelda series. Available from September 20. 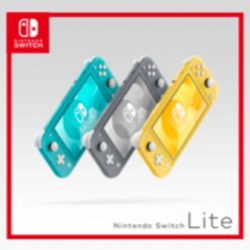 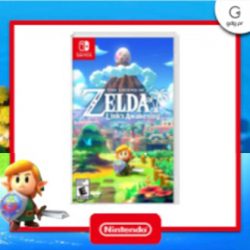 Rubie’s proposes for the next season two costumes that celebrate the release of the new live action of The Lion King and the 80th anniversary of Batman that will be celebrated in September.

Simba’s costume, simple and with attention to detail. Experience fantastic adventures like the Lion King in the original Rubie’s costume. 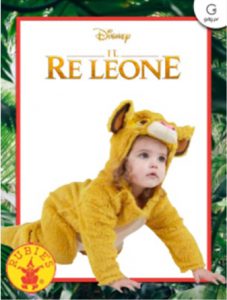 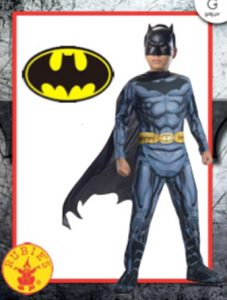 ← SANTORO'S NEW COLLABORATIONS THE BACK TO SCHOOL OF SOUTHARD INC →