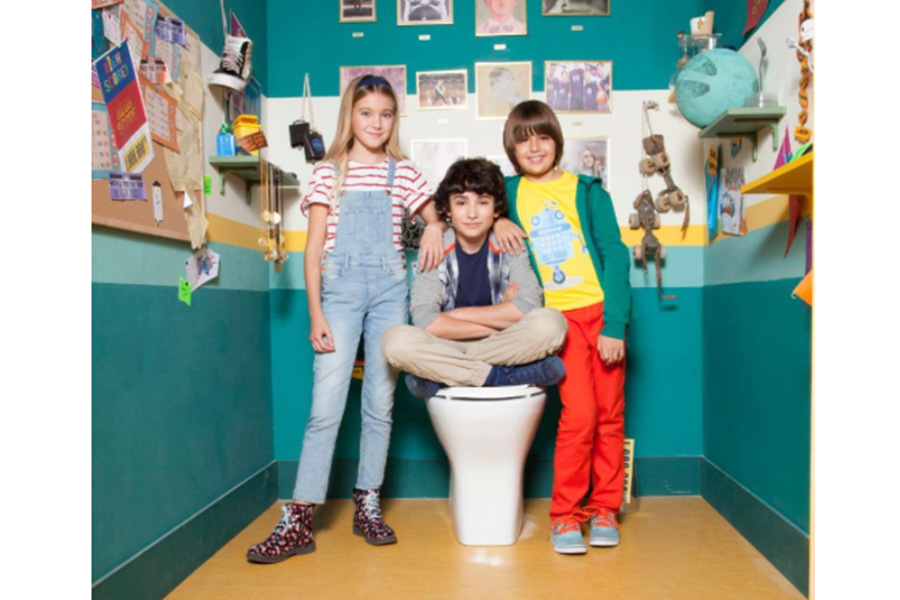 The series is champion of listening on DeAKids and Super!

Since the launch to date about 3 million children have seen the series. In Italy, one in two children has seen New School! Great success also for the social channels with over 40,000 subscribers. De Agostini confirms its commitment to original production and collaboration with prestigious partners.

De Agostini Editore, through its business unit Digital De Agostini, to which the group’s television channels belong, is pleased to announce the closure of an international distribution agreement with BBC Studios for “New School“, an original Italian series produced by De Agostini Editore/DeAKids and broadcast on DeAKids (Sky, 601) and Super! (Sky channel 47 DTT and 625), the joint venture channel between De Agostini Editore and Viacom International Media Networks.

BBC Studios has acquired the rights for the worldwide distribution of the three seasons of live action for children (with the exception of Italian-speaking countries) and an option for any spin-off of the format.

Henrietta Hurford-Jones, Director of Children’s Content at BBC Studios says: “New School is a fantastic addition to our distribution catalogue. The writing of the series is first class – brilliant fun with characters who are really pop. It’s a truly excellent series that will entertain audiences in every country.”

“We are very proud that our sitcom New School has been included in the prestigious distribution catalogue of BBC Studios – says Massimo Bruno, Head of Tv Channels of the De Agostini Editore group – De Agostini thus confirms its strategy of producing original content for the high quality target kids for an international audience.”

“New School“, now in its second season on the air and whose filming of the third season has just begun (which will be presented by the three protagonists Cloe Romagnoli, Matteo Valentini and Edoardo Tarantini on July 21 at the next Giffoni Festival) has been a great success since its debut on the channels of the group De Agostini: the live action has reached from the launch to date about 3 million children (target 4-14 years). In Italy, one in two children has seen New School at least once.

The show has recorded from the beginning very strong ratings, always ranking among the most watched shows of both DeAKids and Super!, where it reached peaks of over 230,000 viewers and 115,000 kids (target 4-14), especially on Super! the preview of the first episode had record ratings: New School was the most watched show of the kids FTA (Free to Air) in its slot of airing with ratings higher than 96% of the average channel on the target individuals.

New School also doubled Super! ratings in its main airing slot where it reached an average share of over 8%. The program has also intercepted excellent ratings in parental co-viewing and on the various age groups kids, especially on females target 4-11 years with peaks in shares greater than 20%.

At the centre of the series is the story of a group of very young students from an international middle school. The series project was conceived and developed by the original internal production team of De Agostini Editore under the supervision of Alba Chiara Rondelli, Head of original production of De Agostini’s TV channels. The series is directed by Edoardo Palma, with photography by Davide Manca and written in collaboration with the Canadian company Beachwood Canyon Productions by Frank Van Keeken, screenwriter, showrunner, producer and director from California operating in Canada, winner of many international awards including a BAFTA Kids vote Award. The series was produced by Maestro Productions for DeAKids.

De Agostini confirms its commitment to the production of scripted series for children, in line with the strategy of creating original and distinctive content at a high quality level for the target audience.
The series will be back on TV in autumn with the third season on DeAKids and the second on Super! The third season will be on air on Super! at the end of 2020.

Recently, four volumes dedicated to New School have been published by DeA Planeta to confirm the success of the series: “How to survive at school – The New School Manual“, “The Book of Challenges“, “The New School Sketchbook” and the novel “A Year at McGaffin“.

The merchandising and licensing activities of the series for Italy are handled by Funwood Media Licensing.
On www.supertv.it, the channel’s website, there are currently 1,000,000 pages viewed on the news dedicated to the series, while the videos published with content, including unpublished content, on New School have generated more than 1,250,000 views. Great success also for the social channels YouTube and Instagram, which have over 40,000 subscribers.

“New School” tells the story of a group of very young students from an international middle school. At the center of the series are the stories of a group of “primini” of the New School, the McGaffin International Middle School in which there is an imaginary toilet. It’s a broken toilet that houses the Wall of Celebrities, a wall tiled over the broken toilet on which are hung all the names and photos of the school’s legends: the most popular students of all time who have accomplished over the years such memorable feats to get into the myth! Only very few have managed to become so popular over the decades that they have joined this group of elected representatives. To enter the toilet, in fact, you have to complete legendary feats and be voted on the school app by the other students: only those who reach one million points can have their name written on the wall. The artistic cast of the series is made up of eight very young actors rising in age between 9 and 16 years: to play the little Anna will be Chloe Romagnoli, who already boasts several experiences in the world of television and cinema including the beloved series “Braccialetti Rossi”, “Don Matteo” and “Maltese the Commissioner’s Novel”.  Nick will be played by Matteo Valentini, starring Marco Mengoni in the video clip “Guerriero”, while Rudy will be played by Edoardo Tarantini. The artistic cast is completed by Noemi Brazzoli as Vivian, Diego Delpiano as Justin, Alice Papes as Alice and Paolo and Andrea Castronovo as the twins Tim and Tom. The adults Alberto Torquati and Federica Fabiani will play respectively the principal Mister Spencer and Miss Mastermind, the cheerful cook of the school. Among the guest stars of the series are the teen star Matteo Markus Bok and actor Francesco Montanari.

← HORRID HENRY HITS THE BIG SCREEN WITH VUE THIRD SEASON OF MASHA AND BEAR ARRIVES IN ITALY, THE SUCCESS CONTINUES! →