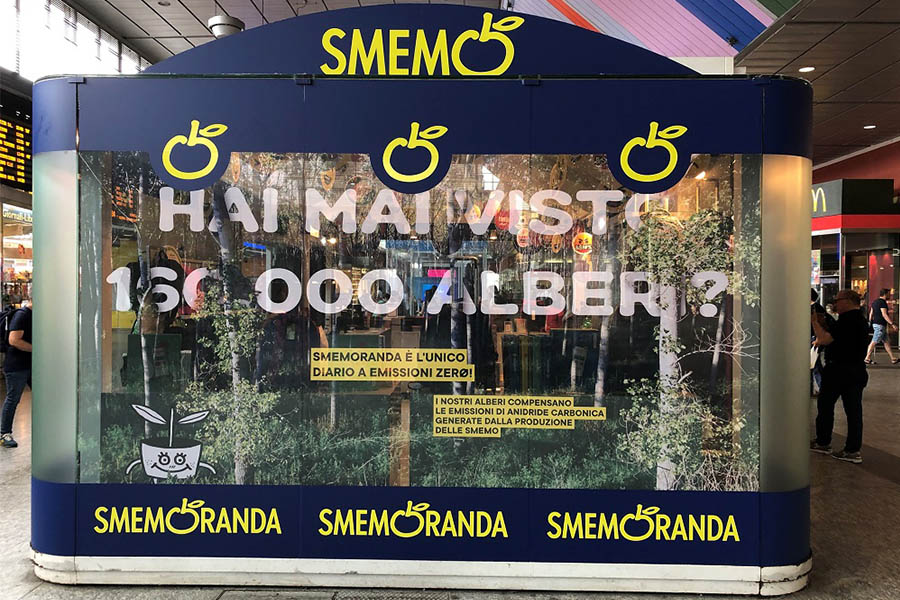 OPENS IN TORINO THE FIRST TEMPORARY STORE BY SMEMORANDA

Until September 30, 2019, travellers and visitors passing through the station will have the opportunity to discover all the news of the Smemo world: from diaries for the new school year to Eco-Friendly S Bags

Attention to the environment has always been one of the key themes of Smemo: to this commitment is therefore dedicated the micro-perforated adhesive press that transforms the Temporary Store window into a green forest that recalls the 160,000 trees planted and managed in the Oltrepò Pavese area by the Pavia Forestry Consortium to offset the CO2 emissions used to produce the diary.

Smemoranda is in fact the only Zero Emission diary produced 100% in Italy: its woods can be visited in the municipalities of Pavia, Mezzana Bigli, Bastida Pancarana and Monticelli Pavese. Smemoranda’s commitment to supporting ecology also continues on the web: from September a column on ecology will be inaugurated on the diary portal, with particular attention to the campaign of Greta Thunberg, the young Swedish activist who is shaking the environmental awareness of teenagers around the world.

The new Temporary Store in Turin is a world open to the new Smemoranda collections and products in a strategic position in the heart of the city, with a daily flow of 192,000 people. In an area of about 30 square meters visitors will find the new Smemoranda 2020 diaries in their Classic and Special Edition, All Black, UNI and Random versions, the Smemoranda and Smemo-Eastpak backpacks and the collection of ecological S bag, produced from recycled PET bottles.

To complete the setting, a sea of fun rotairs that recall the stickers contained in the new diary Smemoranda 2020, dedicated this year to the theme ‘Mai senza’.

‘Mai senza’ a love, a friendship, a passion. A poem, like the one composed for the occasion by Gino&Michele, a backup as in the case of Licia Troisi and Claudio Bisio who have to tell about saving their “files”. ‘Mai senza’ the bike for Dovizioso, the music for Luna Melis, Emis Killa and Charlie Charles, and who more has more! And then Smemo is also (or rather above all!) ‘Mai senza’ those fundamental values such as friendship, solidarity, ecology and respect for the place where we live and the people with whom we are. ‘Mai senza’ the utopias that can change the world, like those of Gino Strada, ‘Mai senza’ freedom, as Roberto Saviano writes. ‘Mai senza’ it is also a word of encouragement for others, as suggested by the champion Bebe Vio. And again: Never cross life without trying to make a difference, as recommended by Fabio Geda. And ‘Mai senza’ desire, which is the engine of everything, as Mika says: you can’t touch it, or eat it, but without it you lose the desire to live. And then, ‘Mai senza’ a social cat, the new entry GattodiM@#£ that will respond with cynicism to your existential doubts with the address gattodim@smemoranda.it; his adventures start from the diary and will continue on the web during the school year.