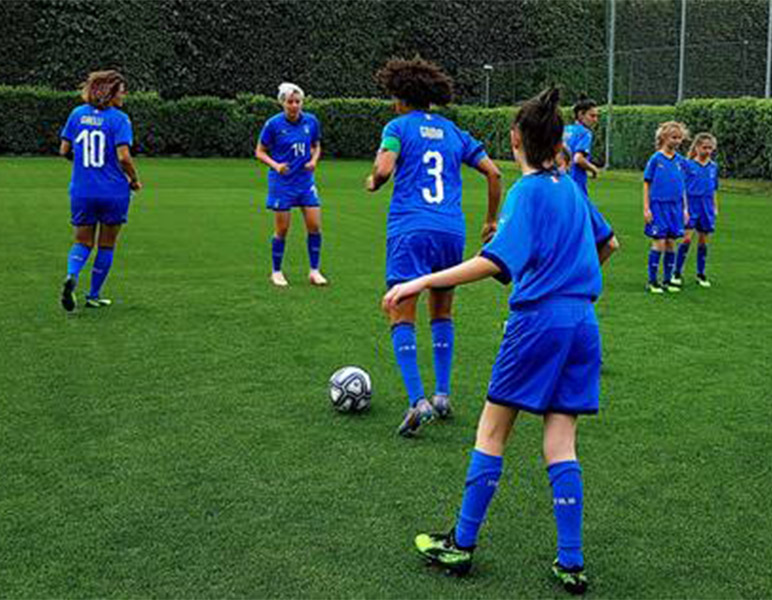 Tags from the story: Barbie, Dream Gap Project, FIGC, Italian National Women's Football Team, Sara Gama OOAK, You can be all you want.

On the occasion of the eighth edition of the World Women’s Football Championship, where the Italian national team will be among the protagonists, Barbie adds a new element to its mission and together with the FIGC – Italian Football Federation – and the blue footballers, realizes the dream of five little athletes, thus encouraging all girls to believe in their potential.

The project that sees Barbie alongside the FIGC, in addition to wanting to celebrate the great milestone of the return of the women’s national team to the World Cup after 20 years of absence, is also born from the desire to focus more and more on a sport still subject to social stereotypes that identify it as purely male. To help break down preconceived notions out of time, Barbie has always shown girls that they can be anything they want, giving them the opportunity, through play, to play in different roles and take on careers of all kinds – more than 200! – encouraging imagination, expression and self-discovery. The mission of the brand is to give value to the unlimited potential of girls, so that they are aware that they can reach any goal they want for their future, breaking down any barrier and challenging stereotypes.

The result of this collaboration translates into the creation of a video that tells the unforgettable experience of the little footballers Sara, Sofia, Tèa, Lisa P. and Lisa G., to amazement and wonder they meet in the Federal Technical Center of Coverciano, to carry out a training a little ‘special.

To guide and encourage them to exceed their limits will be the champions of the National:

Milena Bertolini, the only technical commissioner in the squad for this edition of the World Cup, will lead the Azzurre in the 2019 adventure in France. She expresses herself in this way on the commitment of this partnership “Women’s football – says Ct Milena Bertolini – is one of the pillars of the strategy of the Football Federation aimed at increasing participation and interest in this specific sector, through an intervention operated on various fronts: organizational, infrastructural and cultural. On this last aspect, in order to offer a wider and wider number of girls the possibility to play football, the FIGC is implementing a 360° strategy based on new contents. This is precisely the meaning of the collaboration with Mattel, or a story telling based on a tangible dream, achievable through the identification with football testimonials that are solid reference points for girls.”

Football has always been a sport dear to Barbie, demonstrating this not only to the Barbie Players currently online (Barbie Players special edition 60th anniversary and Barbie Articulated Player) but also the recognition offered by Barbie to Sara Gama, Captain of the Italian Women’s National Team, which in 2018 was celebrated as “Shero“, or positive reference model for future generations of girls, receiving a doll OOAK (One Of A Kind) with its appearance.

In addition to supporting the campaign “You can be all you want“, this initiative is part of the Dream Gap project, whose goal is to increase awareness and attention to the factors that currently prevent girls from expressing their full potential.

THE “DREAM GAP PROJECT”: WHAT IS SIGNIFICANT AND THE COMMITMENT OF BARBIE

Last October 11, 2018, on the occasion of the ‘International Day of Girls and Girls’, Barbie launched the “Dream Gap Project“, whose goal is to increase awareness and attention to the factors that currently prevent girls from expressing their full potential. In recent years, several studies have identified that from the age of 5, girls are less likely than boys to consider themselves brilliant and successful and begin to lose confidence in their abilities. Cultural stereotypes, implicit prejudices and the representations to which they are exposed through the media further reinforce this problem. In the United States this phenomenon is called “Dream Gap“, but similar situations occur all over the world. These limiting factors have an impact on girls’ ability to believe in themselves and Barbie has decided to commission research, turn the spotlight on positive models and gather a real global community to support girls through the Dream Gap Project.