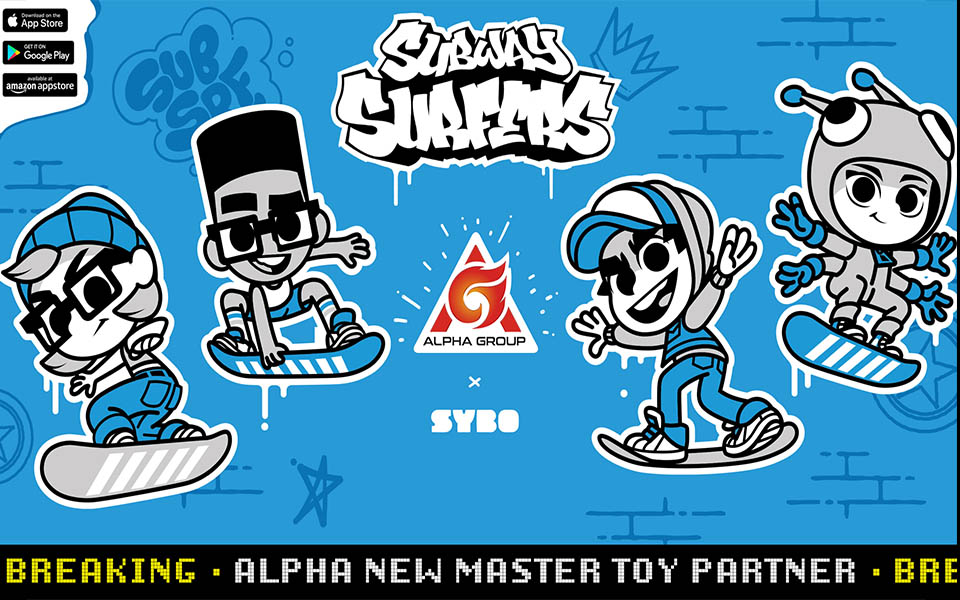 SYBO Chief Commercial Officer Naz Amarchi-Cuevas made the announcement in advance of Licensing Expo in Las Vegas, “We’re thrilled Alpha Group is the official toy partner for SUBSURF. The company has a proven record in bringing amazing and innovative products to market; and most importantly they fully understand the culture, ethos and pillars that embody the SUBSURF lifestyle.”

“The vision SYBO has for Subway Surfers beyond the phenomenal success of the game is incredibly exciting” said Brehan Maul, General Manager North America & Head of Marketing for Alpha Group. “As the master global toy partner, we’re excited to do our part and deliver a wide array of inspired consumer products that express the authentic street-smart, edgy youth culture, skate, music and dance influence the property’s loyal fans demand.”

The first SUBSURF Alpha Group products are expected to hit shelves in 2020.

SYBO has signed ten Licensing Agents to cover more than 30 territories around the world including Retail Monster U.S. who helped broker the deal. Other agents covering Latin America, U.K., Europe, India and Russia, will be announcing additional partnerships in various categories in the next few weeks.

This May SYBO Games’ world-trotting Subway Surfers celebrates its 7th anniversary and hit a new milestone, achieving over 2.5 billion downloads. A recent study by Kids Insight found that Subway Surfers is one of the top 20 apps, not just games, on kids devices.

Subway Surfers: The Animated Series, a 10 x 4 minute-series scripted by Brent Friedman (Star Wars Rebels, Star Wars: The Clone Wars) and produced by Daytime Emmy award-winning producer Sander Schwartz (The Batman, Justice League, Scooby Doo), premiered in 2018 and is currently on SYBO.TV.  A long-form series is slated for the near future.