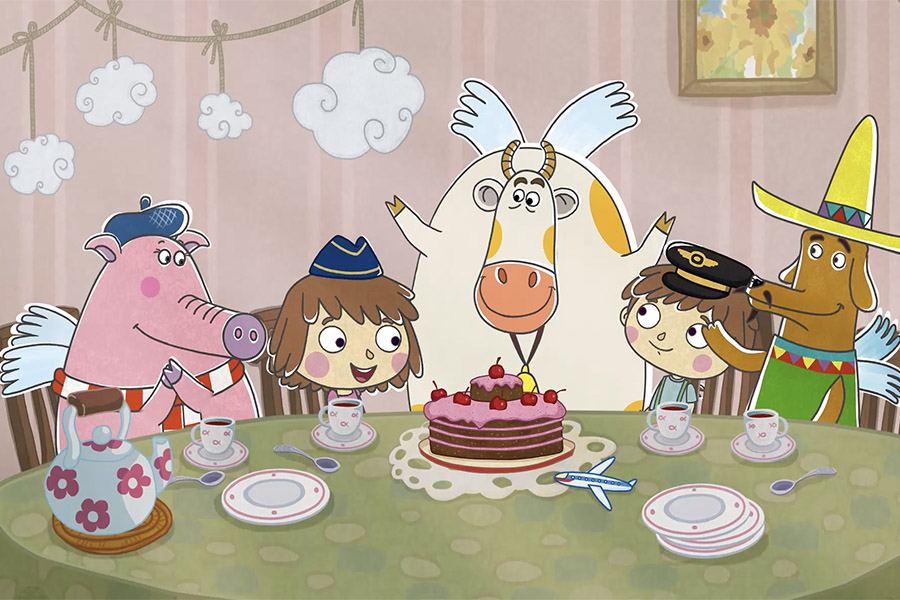 Under the pan-territory deal, which covers the English-speaking territories, Janson Media has acquired the exclusive AVOD, SVOD and TVOD/EST rights to the Flying Animals franchise for the US, Canada, the UK, Ireland, India, Australia and New Zealand. Janson Media’s clients include the English-speaking world’s major broadcasters and home-entertainment companies. It also has direct relationships with the tier-one digital video platforms, including Amazon, YouTube, Netflix, iTunes, Twitch, Hulu and Facebook.

Originally produced in Russian, Janson Media will join efforts with Kip Kaplan, the director of Audioworks Producers Group in New York to dub both Flying Animals and Kids and Flying Animals into English. Both series have also been dubbed into Portuguese and Mandarin after earlier deals with, respectively, RTP for Portugal and Sino Media in Beijing for mainland China.

Jesse Janson, EVP of Acquisitions at Janson Media said: “The Flying Animals series is a wonderfully produced animation that is not only entertaining but provides an excellent model of doing better in the world through their partnership with the Hope For Children charity. We are excited to work with Media I.M. to ensure that Flying Animals is properly released across digital streaming platforms and reaches as many viewers as possible”.

Flying Animals is a fantasy comedy series aimed at children aged six to nine. The storylines centre on a country of musical animals, who are given wings to reward them for their courage in trying to change their lives for the better. In Russia, Flying Animals currently airs on seven channels and online services, including major children’s nets Carousel and Moolt.

The series was originally developed by the St Petersburg-based animation studio DA, whose impressive community activities include conducting animation-therapy sessions to teach children suffering from cancer how to create cartoons. The idea for Flying Animals was born out of this project. Honouring this spirit of philanthropy, Media I.M. teamed up with UK-based charity Hope For Children when it first acquired Flying Animals and continues to donate the distribution profits from the series to the charity’s ‘Your Business, Their Lives’ initiative. Hope For Children’s mission is to ensure that every child has a happy, healthy and positive childhood.

Maria Ufland, co-founder of Media I.M., said: “This and every deal for Flying Animals is, of course, hugely satisfying, but what makes this one special is that we now have an English-language version of this enchanting series. That opens up many more markets for us, which in turn means we can do even more to help Hope For Children, since every penny we raise goes to this incredibly worthy cause. But the Flying Animals are very far from a ‘charity’ proposition — they more than stand up to the competition in terms of production quality and entertainment value, which is why both series have been huge hits in Russia. It’s wonderful to see that our belief in this genuinely unique project is starting to pay off.”

Media I.M. is best known for its remarkable management of the Sunny Bunnies portfolio, which continues to take the world by storm. The show was acquired by Channel 5’s free-to-air platform Milkshake!, where it launched in January of this year. It is now also available on the UK channel’s My5 on-demand service, as well as the Milkshake! website and magazine. In addition, Sunny Bunnies is also available in the UK on Sky Kids, Disney Junior and Amazon Prime.

In addition to the recently announced plush toy deal for Europe with Posh Paws and magazine with Redan, Media I.M. has now closed an exclusive three-year DVD deal for the UK and Ireland with Abbey Home Media Group. The first Sunny Bunnies DVD release “Meet the Hoppy Heroes” is scheduled for September of this year. Sunny Bunnies will also be featured on the Milkshake! DVD, which is scheduled to be released at the end of 2019.

Sunny Bunnies is now broadcast in more than 160 territories, having been picked up by Disney Channel in the US; Disney Junior in the US and EMEA; Discovery Kids India; TF1 digital in France; Canal Panda in Portugal; Gloobinho in Brazil; DHX Television in Canada; 9 Go! in Australia; Mango TV and Youku in China; the Viaplay VOD service in Nordics; and HBO SVOD in Spain and Portugal.