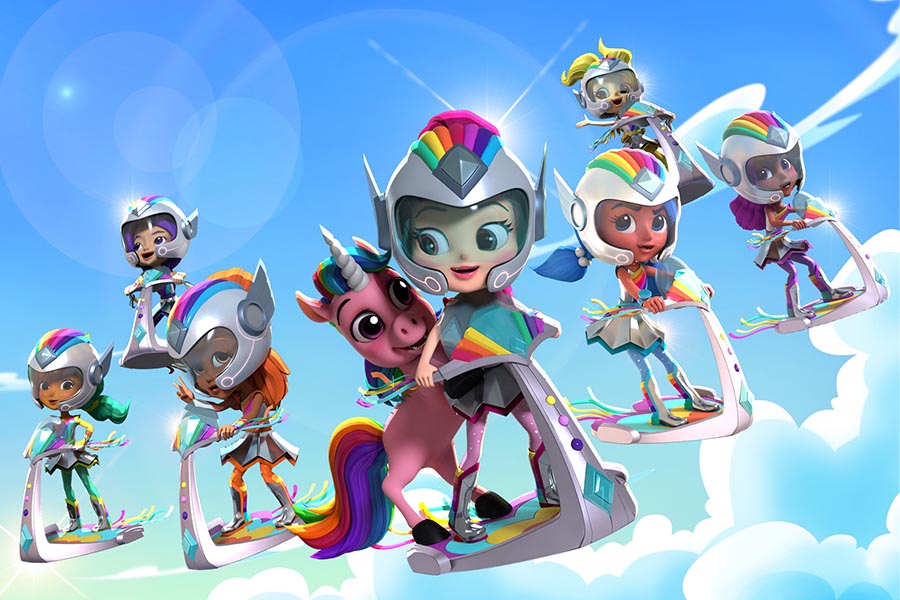 Currently airing in the U.S. on Nick Jr. with an upcoming launch across Latin America on Nickelodeon and NOGGIN, Rainbow Rangers will Debut this summer on Cartoonito in Italy.

Following Genius Brands International’s “Genius Brands” (Nasdaq:GNUS) recent news announcing the greenlight of season two of Rainbow Rangers, and the launch of the hit preschool series into Latin America with Nickelodeon and NOGGIN, the Company signs its first key European broadcast deal for season one (52 x 11’) of  the series with Italy’s leading children’s network, Cartoonito, the preschooler channel realized by the joint venture between Turner (WarnerMedia company) and RTI Mediaset. In 2018, Cartoonito was first among commercial children’s channels that target the 4-7 year demographic with a share of over 9%.

Rainbow Rangers, which is being dubbed in Italian for Cartoonito, is a rescue-based series following the adventures of seven girls who are Earth’s first responders, protecting people, animals, resources, and the natural beauty of our world.  Since premiering on Nickelodeon’s Nick Jr. in the U.S. in November 2018, the series, which airs Monday through Friday in the afternoon, and on Sunday mornings, has consistently garnered top ratings, especially with kids ages 2 – 5, and retained its audience and grown from its lead-in shows across a variety of different time periods in which it has been placed for broadcast.  In addition to Nick Jr. in the U.S., Nickelodeon, and NOGGIN in Latin America and Cartoonito in Italy, Genius Brands is currently in negotiations with other leading broadcasters around the world, which will be announced shortly.

“With broadcasters around the world recognizing the potential of Rainbow Rangers as the next preschool mega-hit, we are excited to kick-off the charge in one of Europe’s major territories through this new deal with Turner’s Cartoonito,” commented Andy Heyward, Chairman & CEO of Genius Brands. “Through its free-to-air and digital platforms, Cartoonito’s footprint reaches virtually every child in Italy, and we look forward to introducing this magical series in the coming year, as well as a robust retail program.”

“There is so much excitement for Rainbow Rangers already following its successful launch in the U.S., and we are thrilled to be among the first in the international marketplace to add this engaging and empowering preschool series to our Cartoonito programming schedule,” stated Alice Fedele, Content Director of Turner Italy.