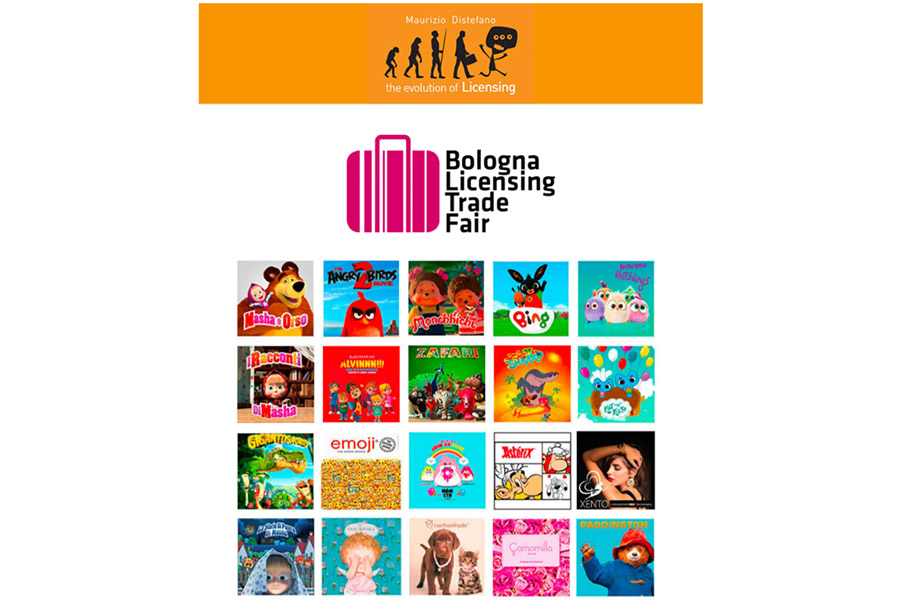 Maurizio Distefano Licensing (MDL) has a big Bologna line-up planned, with 18 properties making their presence felt on Hall 31 stand B4 at the Bologna Licensing Trade Fair from 1-3 April.

Among the highlights of the MDL stand are Bing, a huge preschool favourite in Italy, Masha and the Bear, a classic children’s property, and Angry Birds, whose second movie will be out in Italy in September 2019. ZAFARI, Gigantosaurus and Kit’n’Kate are also getting strong promotion at the show as promising properties about to air in Italy for the first time.

The popularity and strength of Bing, the award-winning preschool series produced by Acamar Films, lies in its simplicity and charm, speaking directly to its young audience through experiences similar to their own.  Bing is one of the most popular TV shows on Rai YoYo and the Bing Italian Facebook page continues to attract a strong following of highly engaged grown-ups. The Italian Bing YouTube channel launched in May 2018 and already boasts an impressive 29.9m views, attracting over 8.9m views a month!  The success of the show with Bingsters and their families has also inspired a huge demand for consumer products.

Over 25 licensees have been signed to date and more are in negotiation for a 2020 launch.  The first wave of Bing products is now available at retail; Grabo’s inflatable balloons, Lisciani’s educational games, Ciao’s dress-up costumes, sticker albums from Diramix and a monthly magazine from Centauria, along with an Easter seasonal offer from Dolfin and Ciao, all of which are being well received by consumers. In addition, local costume character licensee Jets will be managing Bing and Flop appearances across all 3 days of the Trade Fair.

The continuing success of the Angry Birds mobile game series, and the Angry Birds Movie (Angry Birds Movie 2 is due in September 2019 in Italy), has driven strong licensee engagement with the Angry Birds brand in Italy. As well as a growing licensing portfolio, Red and the gang have even taken part in an Haute Couture event at MDL Licensing Meeting and agreed a deal promoting seaside resorts with Alpitour.

MD Licensing is also focused on properties with the potential to be among the next major names in licensing. One of these, ZAFARI, is a TV series about the baby elephant, Zoomba, born with zebra stripes instead of the normal skin of an elephant, and some equally unusual animal friends who live together at the foot of Mount Kilimanjaro. The show celebrates friendship and differences and is already rolling out through a number of broadcasters across Europe, including Italy’s Rai YoYo. The look and themes of ZAFARI inspires a colourful and unique style guide that will help to build strong, appealing product lines, while the many endearing and instantly recognisable characters will lend themselves to numerous product categories.

Then there’s Kit^n^Kate, a very special cartoon for pre-school kids in the genre of edutainment, packed with fun, adventures and important educational messages that are incorporated into each episode. The series which can boast 2 seasons — one fully on air and one in active production — is currently being broadcasted in multiple territories as well as online with its 27 dubbings. Alongside Ferly, which acts as master publisher worldwide, MDL is expecting a strong retail performance in Italy from this charming and likeable show.

One of MDL’s newest additions is Gigantosaurus. The animated series for preschooler based on the bestselling book by world-renowned author Jonny Duddle is produced by Cyber Group Studios.

This new full-CGI comedy and action series and brings preschoolers along on the adventures of four young dinosaur friends as they explore their prehistoric world and the mystery of Gigantosaurus, the biggest, fiercest dinosaur of them all.

Themes of fun and friendship, plus endearing characters, witty scripts, attention to historical detail in the animals and landscape, and, of course, a lot of dinosaurs, make this a potent player for licensing partnerships.

The Maurizio Distefano Licensing team will be on hand throughout the show to provide more detailed information to potential licensees and retail partners about these properties – and many others, including Angry Birds spin-off Hatchlings; the dream-creating monkeys of Monchhichi; the music and comedy of ALVINNN!!! And the Chipmunks; the whacky rivals Zig & Sharko; the global hit emoji® – THE ICONIC BRAND, the funny and slightly crazy Hamstas, the evergreen Asterix; fashion jewellery brand Xento; the amazing art of Gapchinska; animal photography favourite Rachael Hale; and one of Italy’s best-loved and most identifiable fashion brands, Camomilla Milano.

Maurizio Distefano, founder and President, MD Licensing, says: “From art to Angry Birds and from classic kids’ properties to the favourites of the future, MDL offers variety, quality and opportunity across a wide range of target markets and themes. Come to hall 31 stand B4 and we’ll tell you more!”