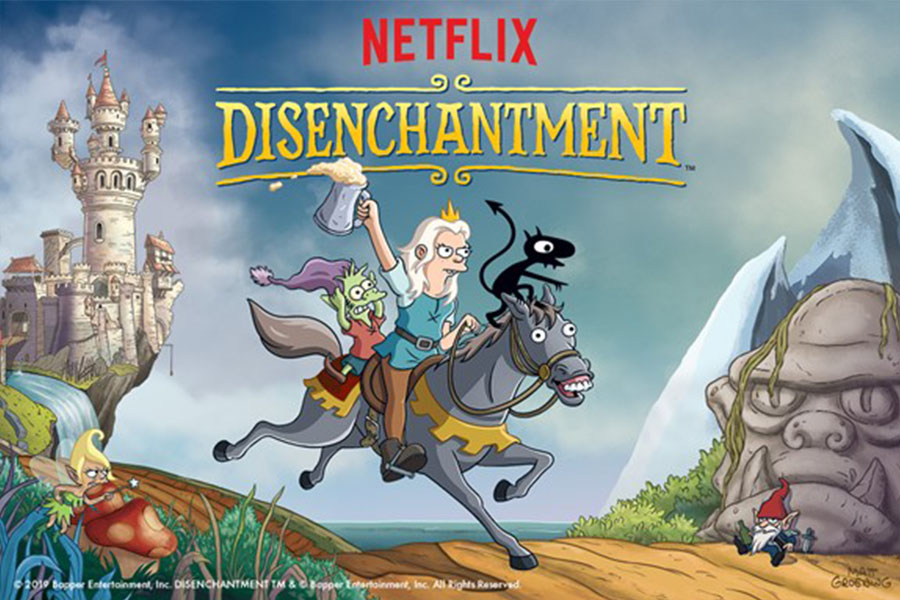 Rocket to manage licensing for new animated series from the mind of Matt Groening.

The series takes place in the crumbling medieval kingdom of Dreamland. It follows the adventures of a hard-drinking princess named Bean, her diminutive companion Elfo, and her personal demon Luci. Along the way, the oddball trio encounter ogres, sprites, harpies, imps, trolls, walruses, and lots of human fools.

The series currently streams on Netflix worldwide in 27 languages. The series launched August 2018, with 20 episodes. Netflix has ordered a second full season. This extended rollout will build strong viewer and consumer awareness as Rocket establishes the Disenchantment licensing programme in the UK and Ireland, giving fans a slice of Dreamland by developing apparel, accessories and collectibles targeted to adult consumers.

Initial anchor licensees have already been signed in the US. Bioworld will launch the first Disenchantment curated t-shirt assortment for the US market online through Coalition Supply at www.amazon.com in March 2019, while Funko LLC and Kidrobot LLC have also been signed for collectibles and gift.

Rocket Licensing will build on the show’s core brand values of fantasy, satire, comedy and adventure. The initial partner focus will be on entertainment retail and a select raft of licensees to build a foundation for a successful long-term licensing campaign. The introductory roll out of product into retail in 2019 will be supported by a strong social media strategy and product previews at relevant events like Comic Con London. A broader rollout of product is expected to follow across a number of major high street and online names as awareness of Disenchantment continues to grow, with a particular focus on 2020 as the second season launches.

Potential categories under discussion include apparel, gifting and homewares, social stationery, food and drink, collectibles, accessories (and electronic accessories) and toys and games. All products will be able to draw on illustrative material that is not only driven by humorous and unique characters but richly-rendered locations supporting the medieval fantasy theme.

Rob Wijeratna, Joint Managing Director of Rocket Licensing, says: “Matt Groening’s new series streaming on Netflix is characteristically clever and funny but also totally unique. This brilliant and multi-faceted new series has already proven to have enormous appeal to a fast-growing audience and, with long-term scheduling keeping awareness high, Disenchantment will no doubt enchant retailers and licensees too.”