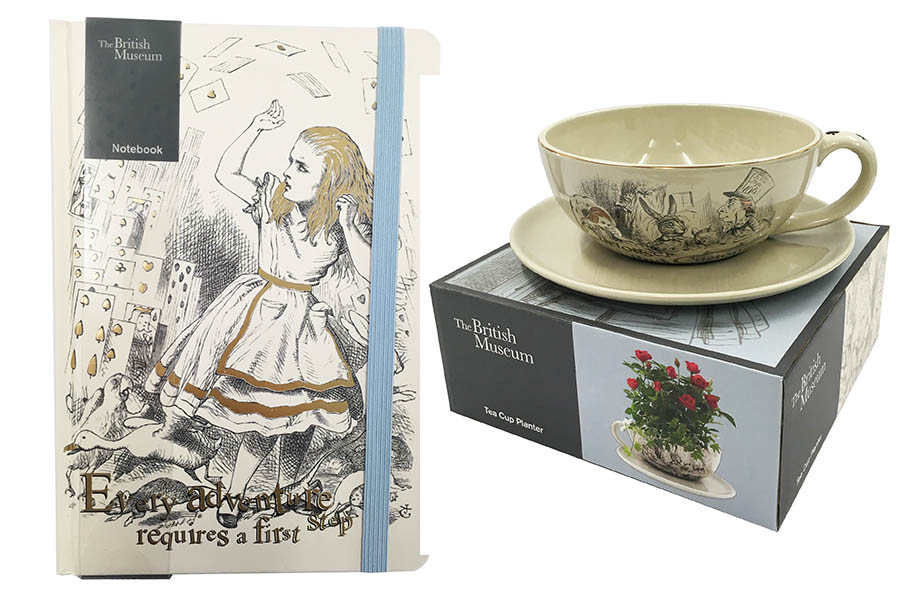 The British Museum, the UK’s most popular visitor attraction, has hailed the success of its first promotion of licensed items in a major supermarket chain. The British Museum Alice’s Adventures in Wonderland Christmas gift promotion, alongside licensing partner BB Designs, appeared in Sainsbury’s for 12 weeks from October to December 2018.

BB Designs, which designed and produced the range and arranged its placement into Sainsbury’s, is a leading supplier of licensed stationery, gifts, accessories and fashion bags.

The range is illustrated with classic images taken from the British Museum’s collection of proof illustrations to Lewis Carroll’s Alice’s Adventures in Wonderland – wood-engraving prints of works by the book’s illustrator Sir John Tenniel.

The Alice’s Adventures in Wonderland gift range saw excellent sales in Sainsbury’s across up to 227 locations. The range had a wide appeal to gift buyers of all ages as well as lovers of stylish and unusual stationery, accessories and homeware.

The Alice’s Adventures in Wonderland range has been so successful that it has inspired the development of another range, which will be made available later this year. The new range will be based on works, housed in the British Museum, by the Japanese artist Katsushika Hokusai, whose print The Great Wave is one of the most iconic images in history.

The British Museum is today a sought-after licensing partner with a growing list of licensees and expectations for more. Its licensing programme is now a global campaign for a globally recognised institution that ,tours exhibitions overseas across the world – from the United States and mainland Europe to China and Australia.

In addition, the Museum has successfully launched its licensing campaign into China, establishing a strong online presence in this exciting market and opening pop-up shops in Shanghai and Shenzhen.

Craig Bendle, Manager of Merchandise Licensing, British Museum, says: “For our very first promotion in a major supermarket, and one that took place in the run-up to Christmas, a gift selection was the ideal offering – and Alice in Wonderland was the perfect theme. We’re delighted with the result and grateful to BB Designs for designing these items and helping us to bring them to one of the UK’s leading retail names.”