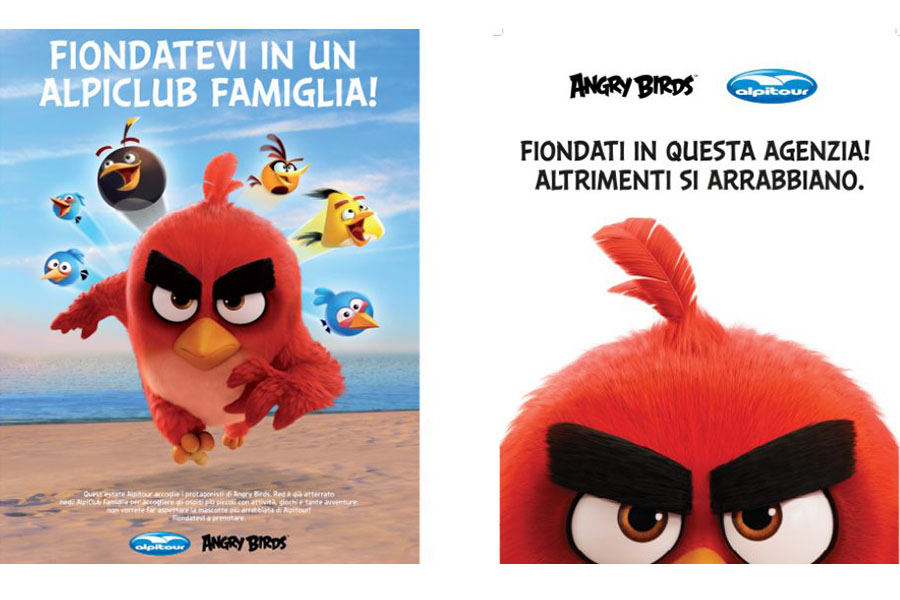 Leading Italian travel company Alpitour S.p.A has signed a special Licensed Experience contract through which it will promote its seaside resorts across the Mediterranean Sea with the help of characters from the eagerly awaited new film The Angry Birds Movie 2, set to premiere in Italy in September.

Costume characters based on Red and Alpitour mascotte Ippo will be entertaining customers with fun gadgets and activities in all 35 AlpiClub Family villages and at VOI Tanka Resort from spring 2019. Fans will also have the chance to enjoy incredible digital experiences and win a discount coupon for their next holiday, playing two different instant-win games, both in travel agencies and on 360.alpitour.it portal. Furthermore, on the APP My Alpitour World, is available an exclusively realized mini-game featuring Hatchlings, the hilarious baby birds who rose to success with The Angry Birds Movie, that in this version will go…on holiday!

But that’s not all! Alpitour has restyled its catalogue (available online and in travel agencies), populating it with Angry Birds characters. Alpitour will also carry out a promotional campaign with in-game advertising in the selected Angry Birds games along with social media activation and Angry Birds theming on the Alpitour website.

At the end of the summer and after having enjoyed the adventure with the cheeky feathered Angry Birds friends, Alpitour will offer a selection of travel agencies and customers the chance to go and see The Angry Birds Movie 2, the new film that will be released in Italian cinemas on September 12, sequel to the famous 2016 debut.

The first Angry Birds Movie, produced by Rovio Entertainment and distributed in Italy by Sony Pictures, was released in Italian cinemas on June 15, 2016 and grossed $352 million at the global box office.

The success of Rovio Entertainment’s Angry Birds mobile game series, one of the most popular the world has ever seen, and the Angry Birds Movie, has driven strong licensee engagement with the Angry Birds brand in Italy.

Maurizio Distefano, President, MDL, said: “With the second Angry Birds movie anticipated to be one of the highlights of the 2019, this agreement is a perfect way to add to the holiday fun for kids and families at Alpitour resorts. We’re delighted to have a role in bringing the Angry Birds characters to one of the biggest names in Italian tourism.”

There are many affinities between Albitour and Angry Birds, starting from the extremely strong awareness they enjoy: Alpitour is Italy’s first tour operator, Angry Birds has an international reputation that is reflected also in the Italian market, where the Angry Birds games have been downloaded 47 million times. Both are realities aimed at families, linked to leisure and with exotic locations and sea: a common thread that has allowed to extend the activities, wrapping and further coloring the fun world of Alpitour.

“The Alpitour brand has always been attentive to the family target and the AlpiClub collection is designed for those looking for a relaxing holiday in clubs able to offer dedicated services and entertainment activities – commented Andrea Cortese, Chief Marketing & Digital Officer of the Alpitour Group. This year we have chosen to characterize our “family” offer with the presence of Angry Birds: a new operation for our Group that allows us to differentiate and position the Alpitour miniclubs in a unique way, to create a communication path throughout the consumer journey and to attract more attention from millenials families“.