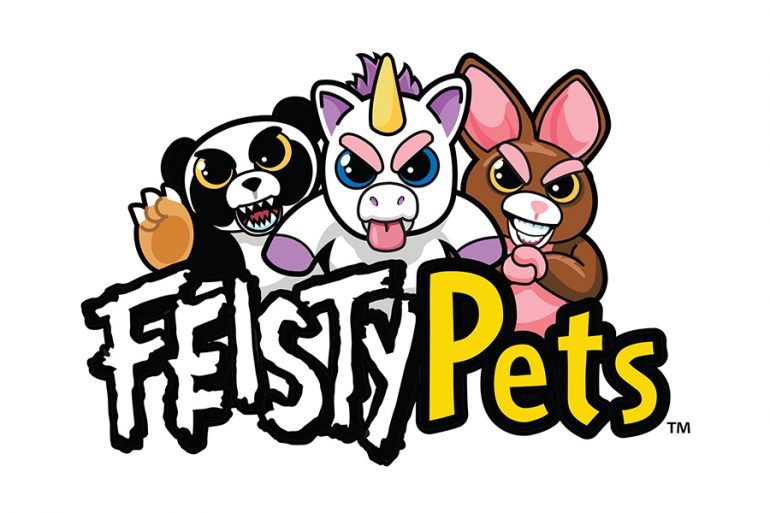 From USA, Feisty Pets revolutionizes the toy world by interpreting a new form of interactive entertainment.

Surge Licensing, based in New York, has designated Mondo TV as a sub-agent for the development of the licensing program in Italy and in the Iberian Peninsula of Feisty Pets, the toy-based entertainment brand created by William Mark Corp.
Feisty Pets is a line of innovative soft toys that change their expression with a simple gesture. Their peculiarity is that of transforming from adorable to terrifying, pressing a button behind the ears. The collectability is certainly one of the main strengths of the brand. The characters are numerous and are distinguished by their funny faces and evil grins.
From the USA, Feisty Pets revolutionizes the toy world by interpreting a new form of interactive entertainment. The authenticity of the brand that resides in its collective matrix also finds expression on social media through content created and disseminated by millions of users (UGC) that have given rise to a real media phenomenon.
Matteo Corradi, CEO of Mondo TV, says: “The collaboration with Surge Licensing on Feisty Pets represents an absolute novelty for the Group, always attentive to emerging trends in the licensing industry. For the first time, in fact, we have decided to insert in our portfolio a brand that, although not tied to a TV series, is ready to become the IP model of the toy of the future.The success that Feisty Pets is having abroad is really remarkable and we can not wait to replicate it in Italy and in the Iberian Peninsula developing a solid licensing program“.
With Jazwares as a global master and Scholastic as master publishing in English, Mondo TV‘s strategy will be to coordinate with the launch of the toy to start a roll out plan that aims to make Feisty Pets a lifestyle brand in the countries of direct competence .
“We are thrilled to welcome Mondo TV to the Feisty Pets family,” said Surge Licensing vice president, Elan Freedman. “Mondo’s licensing team has shown that it has the right dose of Feistyness to manage the brand’s success in Italy and in the Iberian Peninsula“.
“In just one year, the number of global viewers of the YouTube series of Feisty Films has reached staggering dimensions exceeding 100,000,000 views, which, combined with a capillary presence of the toy and the 3d figures that can be collected in large retailers, shows that it has come the time to expand the business of Feisty Pets licensed products in Italy and in the Iberian Peninsula to all product categories. “added Valentina La Macchia – Licensing Director of Mondo TV “With these premises we can only be very positive about expected results for the next two years 2019-2020.”