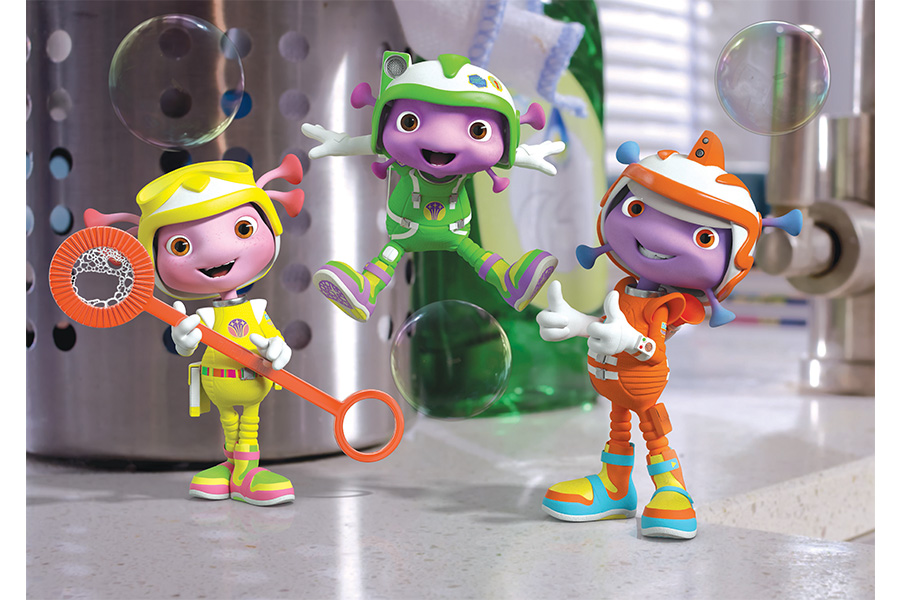 Episodes to air in UK from December.

Independent UK production company Nevision has struck an agreement with Nick Jr. Too in the UK for its hit animated series Floogals. From December 2018, the Viacom-owned preschool channel will air the first 52 x 11’ episodes of the series which is co-produced by Nevision, Zodiak Kids Studios and Universal Kids with UK animation studio Jellyfish Pictures.

Currently in production on a third season for co-production partner Universal Kids, NBCUniversal and commissioned by Channel 5’s Milkshake!, Floogals is a ground-breaking mix of photo-real CGI, and live action. Fleeker, Flo and Boomer are pocket-sized alien adventurers on a mission to observe, experience and detail the new and exciting world around them – Planet Earth! Arriving in their spaceship with a bump from the distant planet Floog, the Floogals are on a mission to document everything around them in the peculiar world of “hoomans”. Whilst trying to keep their presence a secret, the innately inquisitive Floogals discover the wonders of our big, exciting and sometimes baffling world as we see it from their tiny perspective – four inches off the ground!

In the UK Floogals is in the Top 5 shows for the Milkshake! block and has also reached a total of 8.1 million viewers since launching in July 2017.

Louise Bucknole, VP Programming VIMN Kids said, “We are delighted to be introducing the adventurous and curious world of Floogals to the Nick Jr. Too audience.”

Nigel Pickard, Executive Producer and Director at Nevision added: “Floogals goes from strength to strength on both sides of the Atlantic, continuing to be a top-rated show for both Univeral Kids and Milkshake! We are excited that Nick Jr Too has picked up the show which will introduce the Floogals to a whole new audience across the UK.”

← ATLANTYCA announces the production of brand new BERRY BEES tv series at MIPCOM 'ALVINNN!!! & the Chipmunks' gets greenlit for Season 5 with worldwide pick up →