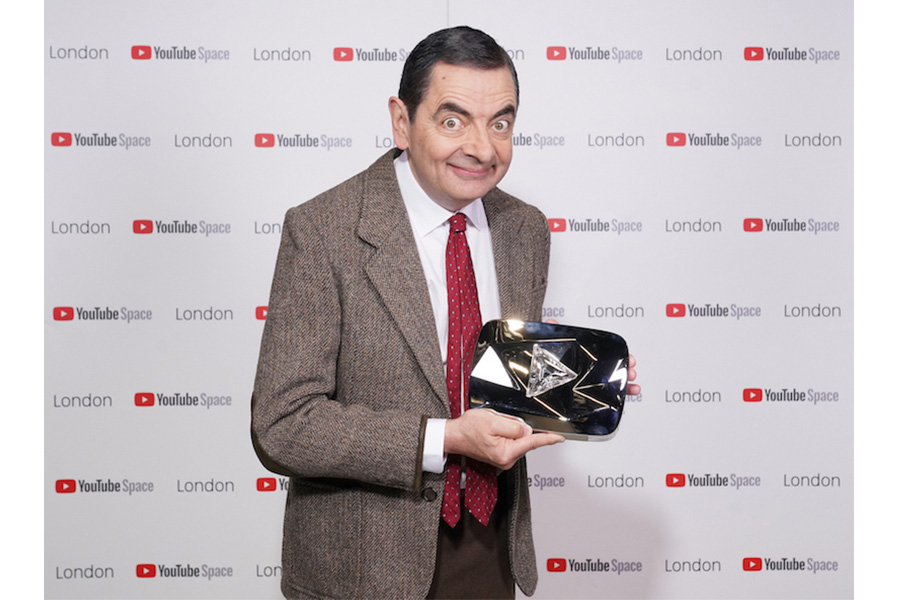 Global star Mr Bean, has been awarded the YouTube Diamond Play Button for surpassing 10 million subscribers on the official Mr Bean channel www.youtube.com/MrBean. Mr Bean, whose original live action series predates the platform, is the oldest British recipient to join the elite Diamond Play Button club. Mr Bean also breaks additional records as the only one to do it using such few words and the first to reach this milestone using content that was first created nearly 30 years ago.

The coveted Diamond Play Button award has been bestowed to less than 100 YouTube channels worldwide. Previous UK recipients include Ed Sheeran, Zoella and Adele. To commemorate this landmark milestone, Mr Bean has joined forces with creator and inventor Colin Furze, for the Mr Bean channel’s first ever YouTube collaboration.

The timeless Mr Bean is the epitome of visual comedy, and with minimal dialogue, it appeals to audiences of any age, all around the world. Broadcast in nearly 200 territories with more than 4.5 billion video views on YouTube last year, Mr Bean is a truly global hit with fans from the UK to India, the U.S. and Brazil. The Mr Bean channel is amongst the top watched UK TV brands on YouTube globally.

Ben McOwen Wilson, YouTube Director of Partnerships of Europe, Middle East and Africa YouTube commented, “Mr Bean is a cultural phenomenon and a great example of a British TV icon adapting and expanding for the digital age to reach new audiences through technologies like YouTube. We are so pleased to be celebrating this milestone and look forward to seeing what comes next.”

Wim Ponnet, Chief Strategy and Commercial Officer, Endemol Shine Group said, “Stemming from just 14 original live action episodes, this milestone achievement on YouTube is testament to the enduring popularity of Mr Bean. By working closely with our platform partners, we will continue to grow our global community and entertain new audiences from all around the world with our timeless content.”

In celebration of the Diamond Play Button award, the channel will showcase all-new, bespoke content. Fans can enjoy the moment Colin presented a very excited Mr Bean (Rowan Atkinson) with the Diamond Play Button award, in addition to a brand-new animated Mr Bean sketch featuring an animated Colin which he also voiced, which was released on Tuesday 30th October. On Thursday 1st November Colin released his own special film to celebrate, as he constructs a ‘Furze version’ of Mr Bean’s remote-controlled armchair, inspired by animated episode ‘Caring Bean’.

One of Britain’s most famous comic creations of all time, Mr Bean first appeared on our screens in 1990, with the ever-versatile performer Rowan Atkinson playing the hapless hero. Now in production for its third series, Mr Bean Animated Series (voiced by Rowan Atkinson) celebrates the transition of a successful live action comedy series into a classic animated series.

The Most Watched Videos on the Mr Bean YouTube Channel are: