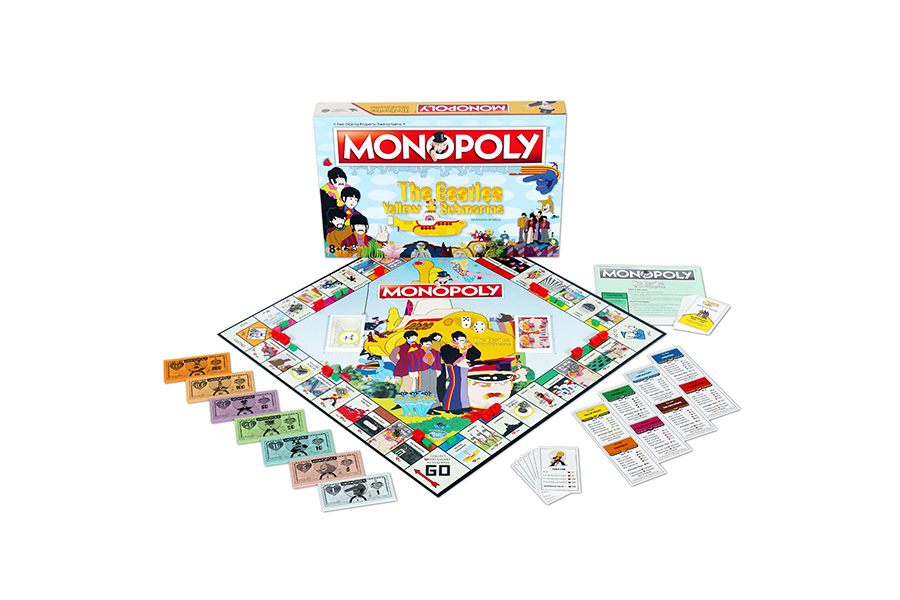 Caroline Mickler Ltd — which manages the UK licensing programme for both The Beatles and Yellow Submarine brands together with Apple Corps — has announced the arrival of a special edition of the classic MONOPOLY game based on the iconic animated film, Yellow Submarine.

Lasgo as the UK distributor, produced by international games company Winning Moves – under official license from MONOPOLY owners Hasbro – is launching to coincide with the 50th anniversary of the release of the film. Yellow Submarine will be re-released on July 8 in picture houses and independent cinemas across the UK as part of the 50th anniversary celebrations.

Like MONOPOLY itself, it is likely to have a strong appeal to game-playing families and friends of all ages, as well as the many fans of The Beatles and Yellow Submarine.

The edition will be packaged in a colourful box featuring the cartoon incarnations of the Fab Four and characters from the film, as well as the famous Yellow Submarine itself. Of course the board will look very different from the familiar London edition of the game: Regent Street, Bond Street, Oxford Street and all the London stations and utilities have been replaced by Nowhere Land, Rainbow Tunnel, Sea of Green, Trombone Express and Mersey Works (to name only a few), as well as new versions of the Chance and Community Chest squares and cards that say ‘It’s All In The Mind’ and ‘Nothing is Real’. The tokens are different too get ready for Old Fred, Sgt. Pepper Drum, Dreadful Flying Glove, Jeremy Hillary Boob, Love Sign and Yellow Submarine.

Yellow Submarine is a much-loved and fun property that is also rich in extraordinary imagery, which, like the classic film that inspired it, still resonates powerfully 50 years after the release of the film. That’s why Yellow Submarine has today inspired a varied range of licensed products ranging from games, toys, artwork prints and homeware to luggage, bags, apparel and babywear – and even Yellow Submarine figurines. More recent licenses have included t-shirts and gifts from Truffle Shuffle, a graphic novel from Titan books, a picture book and panorama pop-up book from Walker Books, an apparel collection from Pretty Green,

Winning Moves is a games company that makes and sells a wide range of games including favourites like Top Trumps and Pass The Pigs, as well special editions of Monopoly, Cluedo, Risk and Connect 4 – under official license from MONOPOLY owners Hasbro.

Winning Moves, says: “The extraordinary and unforgettable Yellow Submarine has contributed some wonderful themes and imagery to this very special edition of one of the world’s favourite board games. Winning Moves is delighted to be part of the 50th anniversary celebrations of this much-loved and unique film.”

Caroline Mickler says: “This colourful, inventive Yellow Submarine edition of Monopoly is a marvellous addition to the delightful and exciting ranges coming to retail in time for the 50th anniversary of one of the world’s favourite animated films. It’s further proof that this unique brand has never gone out of fashion in 50 years.”

← A return to the roaring SCHOOL with Hot Wheels by MC Group! Barbie by GUT and Sun City: a return to school full of dreams and colors! →