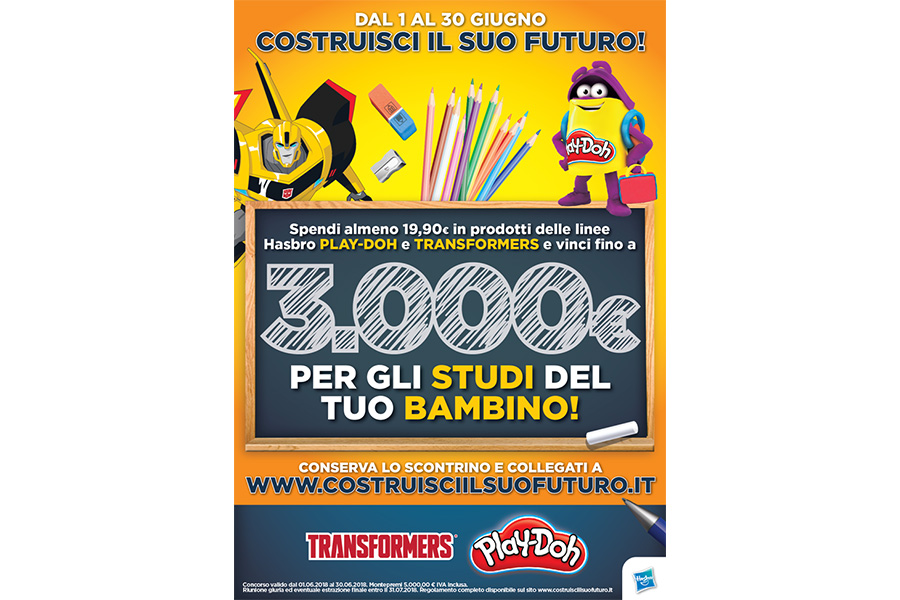 Hasbro promotes children’s education with the “Build your future” initiative

Tags from the story: Hasbro.

The new promotion, which involves the brand Transformers and Play-Doh, allows consumers to win up to 3.000 euros to invest in the education of their children: the sum won can in fact be used for enrollment in any educational activity.

Education is a good that you pay, just think that in Italy, for a course of study that starts from primary school and arrives until graduation, they spend on average between 40 and 50 thousand euros. Hasbro, multinational leader in family entertainment, aware of the fact that the best investment for the future of their children lies in their education, is on the side of the education of the youngest with the initiative “Build his future”. Active from 1 to 30 June, it will allow anyone who purchases Transformers or Play-Doh products to win up to 3 thousand euros to spend on training their child.

Hasbro’s attention to the formative aspects of its products therefore takes shape in the new “Build your future” promotion which, as the name suggests, will allow you to win a sum of money to invest in the education and education of your children. Whether it is a course of photography or manipulation, lessons in foreign languages or computer science it does not matter, as long as the child benefits from it not only in the immediate, but especially in the years to come.

But how does it work? To find out, just a few clicks on Costruisciilsuofuturo.it. In addition to the thousands of families taking part in the initiative, the protagonists are the legendary Transformers, the world’s most famous transformable vehicle robots, and the ever-popular Play-Doh, the longest and most successful modeling paste of all time. This is how Hasbro reconfirms its commitment and constant in giving a positive influence to people’s lives, offering hundreds of children the opportunity to access culture, an invaluable and precious asset that can really make a difference in the construction of their future.