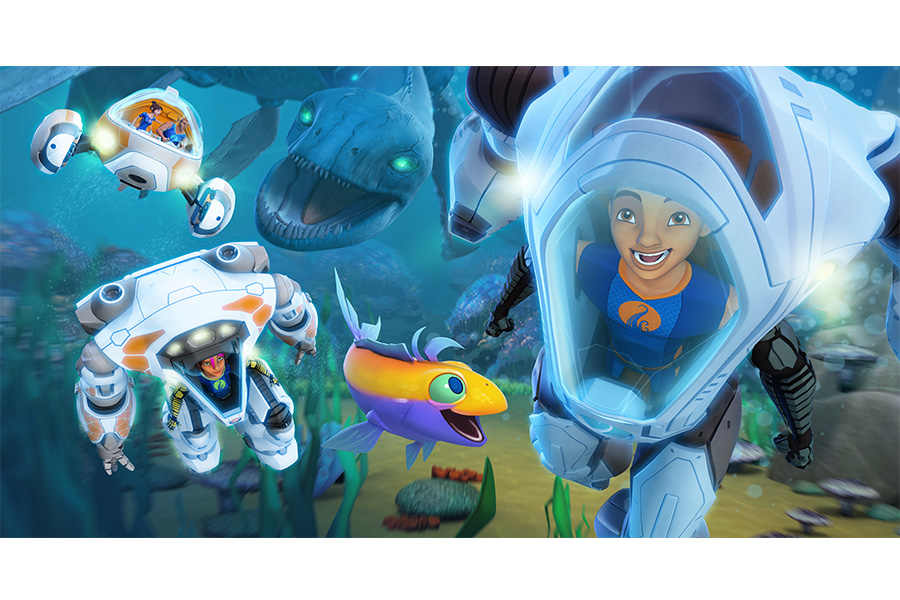 Tags from the story: Technicolor, The Deep.

4D theatrical experience premieres in May in the U.S. and licensing agreements signed in Germany for publishing, partyware and home entertainment, to launch in 2018.

Technicolor and SimEx-Iwerks Entertainment will premiere the first 4D theatrical experience based on the underwater adventure series in May. The Deep 4D: Mystery of the Ancient Amulet will debut at the Georgia Aquarium (Atlanta), Shedd Aquarium (Chicago), the Texas State Aquarium (Corpus Christi), and Orlando Holiday Inn Resort. The 12-minute, fully immersive 3D viewing experience–featuring exclusive new 3D CG animation, an original storyline, and stunning special effects–delivers on the 4D experience with vibrating seats, spraying water, bubbles and more. All locations will feature the 4D film for a one-year period, supported by a variety of marketing and in-aquarium activities.

In Germany, broadcast partner and licensing agent SuperRTL has signed a licensing agreement for Germany, Austria, and Switzerland with TIB Heyne & Co (a division of Happy People) for partyware and St. Martin Lanterns; Blue Ocean Entertainment AG has licensed the rights for print magazines with covermount; and Justbridge Entertainment GmbH has the home video (DVD/BluRay) and download to own rights.

The new deals fall on the heels of recent agreements brokered by CPLG, a DHX Media company: Bloomsbury is on board as global publishing partner to produce a range of books including young fiction, official handbooks and activity-based books to launch initially in the UK and Australia; and Toybox Magazine will feature The Deep brand in their Toybox Print Magazine including pages, workbooks and covermounts in the UK, Channel Islands, Isle of Man and Eire.

The new products will launch in fall 2018, coinciding with the launch of the toy line from master toy partner Simba Toys that will include a range of figures, playsets and role-play toys and accessories in Germany, Austria, Switzerland, and the UK, with other countries to follow in early 2019.

“We are so excited to premiere The Deep 4D: Mystery of the Ancient Amulet, an action-packed, family-based adventure and a perfect fit for aquarium partners who also see the opportunity to inspire children towards environmental stewardship,” commented Pam Kunick-Cohen, Head of Brand Management, Licensing and Merchandising, Technicolor. “Our recent season three renewal and strong ratings continue to attract new licensing partners and we are looking forward to the fall 2018 debut of products for our fans to further engage with The Deep.”

The Deep airs in over 130 markets around the world and follows the Nektons, a family of daring underwater explorers. With state-of-the-art technology and an unquenchable thirst for discovery, they explore uncharted areas of the Earth’s oceans to unravel the mysteries of the deep. Most recently, DHX Media, A Stark Production, and Technicolor announced the greenlight for production on a third season of the series from ABC Australia, comprising 13 new half-hour episodes. Season three of The Deep will also be available to Netflix members worldwide, and on DHX Media’s Family CHRGD in Canada.

The Deep was originally optioned from Nekton Productions. The television series is based on the Aurealis Award-winning graphic novel series, The Deep, which was created by #1 New York Times Bestselling comic author and screenwriter Tom Taylor (X-Men: Red, Iron Man, Batman/Superman, All-New Wolverine, Injustice: Gods Among Us, Star Wars Adventures) and co-creator, artist James Brouwer (Justice League Beyond), and published by Wolfgang Bylsma and Skye Ogden’s Gestalt Comics. Robert Chandler serves as an Executive Producer on the television series, on behalf of Nekton Productions.