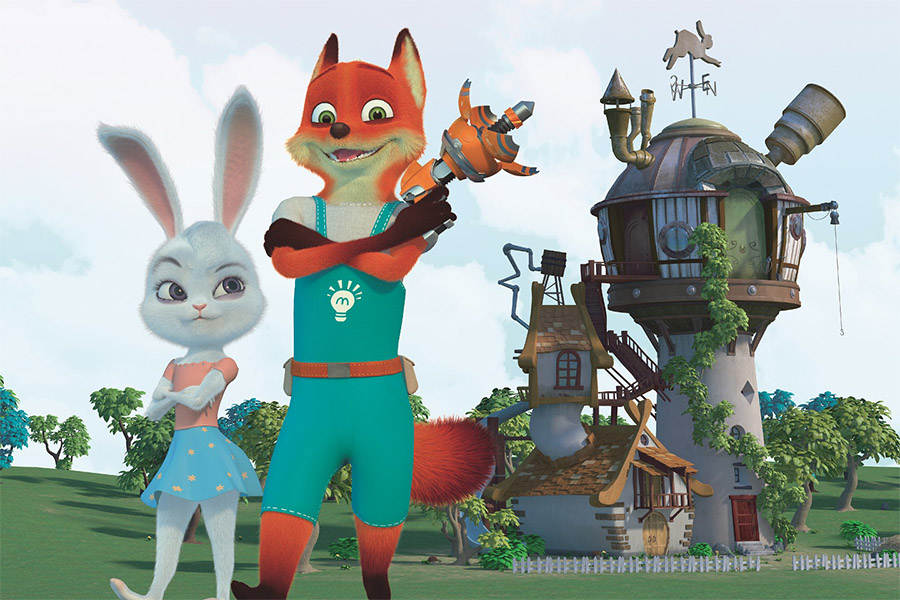 Mondo TV at MIPTV: shows you won’t want to miss!

Mondo TV, one of the largest European producers and distributors of animated content, is promoting an exciting and amazingly varied portfolio of established, recently launched and upcoming television shows at MIPTV – The Global TV and Digital Content Market, taking place from 9 – 12 April 2018 in Cannes. Visitors to MIPTV stand P-1.N1 / P-1.M2 will be able to hear about – and see – a portfolio that varies from pre-school to teen and from live action comedy-drama to animated adventure, fantasy and humour, starring free-spirited princesses, magical beings, protectors of the environment, pirates, robot trains, animal inventors and more! Mondo’s first-ever live action show, Heidi Bienvenida, has already sold strongly into many Latin American markets and extended its reach to Russia and Israel. This co-production with Alianzas Producciones – about the adventures of a happy, carefree girl who leaves her beloved mountain home to live in the big city arrives in Italy just in time for MIPTV: series one – Heidi Bienvenida a Casa (60 x 45’) – will be aired from April on Rai Gulp, a major name in teen programming. Social media campaigns, competitions, cast interviews and appearances by the show’s star, Chiara Francia, will be part of a major marketing campaign to support the launch of the show in Italy.

And that’s not all! Series two of Heidi Bienvenida – Heidi Bienvenida al Show (60 x 45’) – has already been filmed and will launch in 2019. Expect crazy, fun adventures, new music, new places, colour, magic and excitement. This is going to be a big show – in every sense! An Italian launch is also part of the big news story that is Robot Trains, an exciting, inventive new animation for kids, produced by South Korea’s CJ E & M, one of the leading Asian names in the production and distribution of audio-visual content. Robot Trains launched on Italian pay-TV channel DeA Junior in September 2017 and free-to-air DTT channel Cartoonito in February this year.

This thrilling 32 x 11’ 3D CGI series for four-to-seven-year-old children is set in Train World. Train World is an extraordinary place, inhabited by talking trains. But some trains are even more amazing: they can turn into robots! A second season, consisting of 52 episodes of 11 minutes each is already under way. Mondo TV is not only distributing the new series but is also co-producer.

Invention Story (104 x 11’) is a 3D CGI co-production from Henan York Animation and Mondo TV that arrives next year. It’s the tale of an intelligent and creative fox who, in each episode, comes up with a new invention, delighting most of the inhabitants of his adopted home Carrot Town – and making a few very, very jealous. There are plots, conflicts and rivalries as well as funny, eccentric and engaging characters – but this show also offers something different. By following the little fox in his efforts to build each new invention, the five-to-nine-year-old audience will find out more about science and how it works. Such is the enormous potential of Invention Story that Henan York Animation and Mondo TV have already committed to five series for a total of 520 11-minute episodes.

YooHoo to the Rescue is the brand-new 3D CGI 52 x 11’ animated series for three-to-six-year-olds based on the line of multi-million-selling plush toys made by Aurora World. Now confirmed as a Netflix Original Series, the show is expected to launch in 2019. There has been a strong broadcast and licensing response to YooHoo to the Rescue, in which five animal friends who inhabit the magical island of YooTopia and help endangered animals come to Earth to deal with an environmental crisis, making friends and meeting some amazing creatures on the way.

Sissi, the Young Empress (52 x 26’), is an established ratings hit in a number of countries with two series already available and a new, 3D season to be launched in 2019 with a new format and new contents. The free-spirited Sissi has become a big favourite with many young girls aged four to eight, and a strong response is expected to this highly successful tale of adventure, romance, intrigue, magic and mystery.

Cuby Zoo (52 x 11’) is a highly original 3D CGI children’s animated TV show. Telling the story of cube-shaped animal characters who come to life and to help and protect the people of our world, it is ingenious, entrancing and very entertaining.

Adventures in Duckport (52 x 11’) is a delightful and engaging animated series for three-to-six-year-olds, based on the whimsical and loveable characters from the popular design and publishing property Suzy’s Zoo. It tells the exciting and amusing adventures of Suzy, Jack, Penelope, Corky and their friends as they try very hard to be helpful – but don’t always succeed.

Partidei is the fantastic, epic story of the clash between a group of youngsters and a tyrannical robot that has enslaved their world. Packed with action, thrills, fantasy, drama and comedy with a feisty and lovable group of young protagonists, this 52 x 11’ 2D and 3D series will have enormous appeal to boys – and quite a few girls – between five and nine.

The Treasure Island (26 x 26’) continues the incredible adventures of Jim Hawkins, the young lad from the Robert Louis Stevenson masterpiece, whose tales are brought to life in 3D CGI in each exciting episode of this brand-new story for five-to-nine-year-olds.

Matteo Corradi, Mondo TV CEO, says: “We’re thrilled with this line-up, a selection of shows that clearly indicates ambition and creativity, with themes that are as diverse as they are engaging. We are looking forward to telling visitors to MIPTV more about what we feel is one of the most entertaining and original portfolios at this major TV market!”