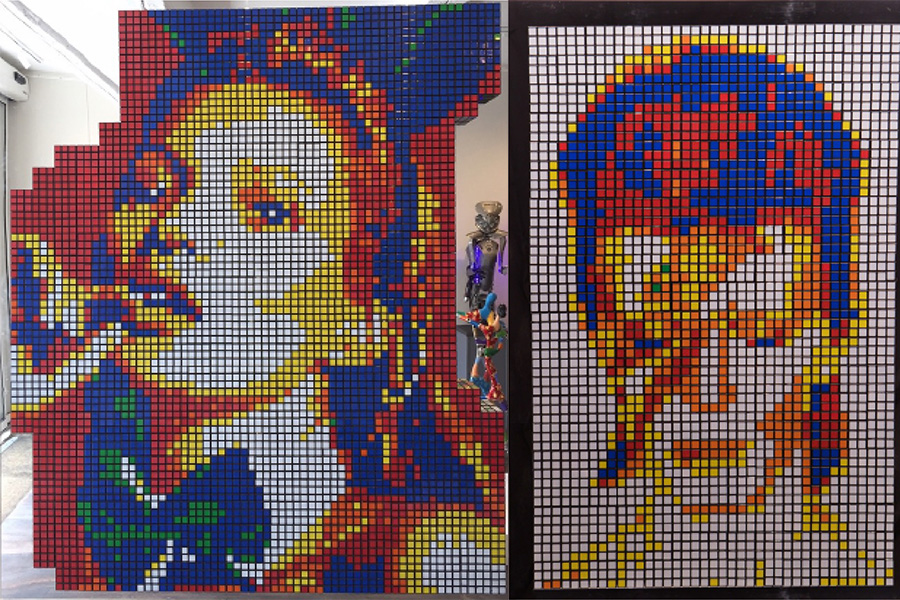 Visitors to Kazachok should head to the The Smiley Company booth (Stand A05) to discover more about the Rubikubism movement and licensing opportunities with the world’s best selling toy of all time.

To celebrate the 15th anniversary of Kazachok, France’s premier brand licensing trade show, The Smiley Company will be exhibiting a special piece of artwork to celebrate its burgeoning brand extension with Rubik’s and also to showcase the brands marriage between art and intelligence.

Rubikubism is an artistic movement that has gained popularity over the last decade and follows in the line of incredibly popular pixel art forms that have evolved from the OpArt seen since the 1960’s, using geometrical shapes to create optical effects.

French visual artist Emmanuelle Rybojad, twenty-six years old, takes us on a journey into that world of illusion utilising mosaics with Rubik’s cubes in order to invite the viewer to be captured by what one sees and perceives. Her current collection of Rubikcubism works features strong links to pop icons and themes including; Kate Moss, David Bowie, The Rolling Stones, Homage to Roy Lichtenstein, Gainsbourg and even Marilyn Monroe, which are perfectly aligned to Rubik’s reputation for 4 decades as an icon of pop culture.

Speaking about the partnership Matt Winton Marketing Director at The Smiley Company said “Rubikubism has become a globally recognised part of the art scene in recent years and we wanted to showcase the amazing work being created by the some of the leading artists in the pixel art scene today. The Rubik’s Cube continues to influence creativity the world over, whether that is new licensees interpreting modern brand extension plays from the world famous Cube, or leading artists creating works of art that will keep the Rubik’s legacy living long into the future. We are proud to share this piece of art with the licensing community in a city famed for its artistic legacy.”

The largest Rubik’s mosaic in the world was created by Cube Works Studio and used an astonishing 85,794 Rubik’s Cubes to recreate the skyline of Macau, China. Whilst Michelangelo’s “Hand of God” masterpiece depicting the Sistine Chapel was recreated in 2010 by Josh Chalom, the same artist is famed for his recreation of “The Last Supper” painting which sold for $50,000 to a private Florida collector.