As the leading character licensing organization in Japan SCP will be showcasing a strong portfolio of properties at both shows. But two in particular are being highlighted for markets in Japan and abroad. They are French animated property Gaspard et Lisa (at Licensing Japan) and Japanese calligraphy artist Juichi Yoshikawa (at Licensing Expo Japan). 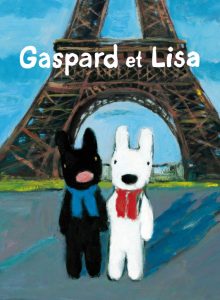 Gaspard et Lisa, the story of two animal friends living in Paris, originated in France and has inspired 40 picture books and an animated programme broadcast in over 80 countries. The property has had enormous success in Japan, where the picture books have enjoyed sales of over two million to date and a strong licensing campaign today includes fashion, stationery, mobile accessories and even petcare. A theme park, La Ville de Gaspard et Lisa, opened in 2013 in Yamanashi, a popular tourist destination 100km from Tokyo.

SCP has managed this property for over 10 years, in which time the property has not only developed a strong market in Japan but has also gained a following in a number of Asian countries including Korea and Taiwan.

As visitors to Licensing Japan will hear, Gaspard et Lisa is now about to enter a new phase. Exhibitions promoting the Gaspard et Lisa picture books have toured Japan in the past year, notably appearing at a Christmas event at Tokyo Skytree, one of the tallest buildings in the world. The property’s sophisticated-but-cute look (called ‘oshare-kawaii’ in Japan), has brought it to a wide age range extending from children to young adult women. A live stage show – Gaspard et Lisa The Musical – Dance! Dance! Dance! – is due to open in April. In addition a unique licensing and merchandising collaboration between the property and Sanrio Ltd’s Hello Kitty, was recently announced, and captured in seven oil paintings, which highlighted both brands.

Juichi Yoshikawa is a Japanese calligraphy artist for whom SCP has acquired worldwide agent rights through an agreement with his management at Hasshoo Co Ltd. This amazing personality and his art will be a highlight of the SCP stand at Licensing Expo Japan 2018.

Juichi Yoshikawa has penned title designs for many popular Japanese TV shows and hit comic series. However, he is more famous on an international stage for his extraordinary live shows, which include creating his trademark calligraphy (a style known as syo) from a helicopter in the Red Dunes of Dubai, writing a vast syo piece at the base of Paris’ Eiffel Tower, and a performance in front of 3,000 spectators at China’s Tiananmen Square of an enormous syo piece measuring 45 metres by 15 metres. His latest creation was for eyewear brand ZOFF in a campaign titled ‘EYE am a HERO!’ launched in February.

SCP will be looking at a number of opportunities to develop an international licensing campaign around Juichi Yoshikawa, highlighting not only his eye-catching works but the extraordinary artist himself through events, promotions and carefully selected appearances.

Takeshi Nakamura, Global Business Group Licensing Manager, Sony Creative Products Inc., says: “Our appearance at these two major licensing events will highlight the diversity of our product portfolio – a diversity clearly underlined by our focus on Gaspard et Lisa, a stylish animated cartooon with multi-generational appeal and Juichi Yoshikawa, a true artist but also an internationally known larger-than-life personality. We are, of course, looking forward to telling visitors to both shows more about these amazing properties.”