Announcing the next edition, from 25th to 28th of March 2019, and Switzerland will be the guest of honor.

The 55th edition of Bologna Children’s Book Fair, which took place March 25 – 28 at BolognaFiere – confirms once again its ever-growing figures, with 27,642 professional attendees (+3% compared to 2017), including 12,403 foreign visitors (+6% compared to 2017). 20,000 square meters, 1,390 exhibitors, (110 more than last year, up by 8,6%) coming from over 77 countries and regions. For 4 days BolognaFiere hosted professionals from the international children’s publishing business, including illustrators, authors, exhibitors, publishers, operators, artists, librarians, teachers, producers and developers, thus confirming once again its status as the most important international trade fair of the industry.

During the Bologna Fair, the exciting program of events at New York Rights Fair was announced.  The new copyright trading event of the publishing industry is scheduled for May 30 – June 1st 2018 in New York (https://www.newyorkrightsfair.com/program).The appointment will be an opportunity for American publishers and agents to meet their peers at international level. US-based strategic partners will contribute to the global reach of the event, including Publishers Weekly PW, the international media platform on publishing, co-sponsor of the Global Kids Connect (NYC) initiative along with BolognaFiere and the Bologna Children’s Book Fair. Partners include Combined Book Exhibit and PubMatch, the largest online platform for trading rights.

The new collaboration between the Bologna Children’s Book Fair and the China Shanghai International Children’s Book Fair was presented on Monday March 26th, first day of the Fair. The first “Bologna-trademark” edition of the Fair will take place in Shanghai from November 9 to 11, 2018, and will include countless activities organised in collaboration with BCBF, involving prominent names of the children’s book industry, bringing new exhibitors to Shanghai and consolidating CCBF’s role as a unique publishing event, the only one focusing on editorial contents for children and young adults in the Asia Pacific region. 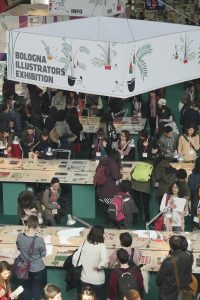 Following the appreciation during last year’s edition, the Illustrators Exhibition was once again an extraordinary success, greatly due to the innovating horizontal display of the plates, reflecting the point of view of the judging panel. The exposure of the Illustrators Exhibition will be further amplified by the biennial tour that will take it around the world, stopping, among other places, in Japan and China.

As guest of honor for 2018, China’s participation proved itself extremely significant, in terms of space as well as of contents, with more than 100 exhibitors and over 3,000 presented titles. The exhibition of the best of China’s contemporary Illustration staged at the Service Centre was an amazing success (showcasing 150 original plates by over 30 illustrators) as well as the events’ program in downtown Bologna, including the Chinese Ancient Illustration Art Exhibition. Chinese children’s books authors such as Cao Wenxuan, winner of the Christian Andersen Award, Han Yuhai e Yu Hong met the city’s numerous audience.

More than ever, it was standing-room only at the over 250 events of the Fair, starting with those promoted by the Bologna Children’s Book Fair: first and foremost the conference – organized in collaboration with the New York Times – for the 65th anniversary of the Best Illustrated Children’s Books Award, with the great stars of illustration worldwide, as well as the international conference on Children’s Books On Art, Architecture & Design featuring among others Didier Cornille, author of the extraordinary pop-up book on Frank Gehry written and designed for the Vuitton Foundation. The audience was deeply moved at the tribute to Carla Poesio, author and literary critic who was part of the Bologna fair for over fifty years and after whom a literary award will debut in 2019.  Last but not least, the European Independent Bookshops congress was an opportunity to discuss the state of the art on these social and cultural meeting places that are so important for promoting books and reading activities.

Technology took centre stage with the international event on audiobooks, increasingly successful among kids, the Dust or Magic event – organized with the American Children’s Technology Review – and dozens of events on the most innovative apps, especially the ones offering Augmented Reality features, capturing the characters from the pages and taking them, along with the readers, to new worlds and new stories.

Over 6,000 enthusiastic illustrators took part at the Illustrators Survival Corner, which proved once again to be the ideal place for artists – especially young ones – to meet experts of the publishing industry and exchange ideas and experiences. All events were sold out since the early morning, and there was great attention, at the Corner and all over the fair, for Latin-American illustration. The latter was at the centre of a round table on its identity and diversity, featuring many of the region’s most interesting talents, including Andersen Award finalist Pablo Bernasconi.

The events of BOOM! Crescere nei libri [BOOM!Growing up in books] were also extremely successful, and will continue to entertain the readers in Bologna until March 31st.

Over 720 journalists were registered at the Bologna Children’s Book Fair 2018, 200 of which coming from 38 different countries. Attendees came from all over Europe as well as from Asia – Middle Eastern countries, Bangladesh, Taiwan, Japan – various African countries, the United States, Brazil and Chile. A large press delegation came from China, the guest of honour country. The top-level media exposure included live coverage and reporting from the Italian and foreign national television and radio stations, as well as newspapers, magazines, international trade press and hundreds of web magazines. Over 1,000 articleswere published to date, with many in-depth stories on the main daily papers, covering the extraordinary editorial offer for 2018. Among others, The Bookseller (Great Britain) and Publishers Weekly (USA), two of the leading professional publications on the world of books, created daily magazines reporting the Fair’s many daily news and events.

The Digital Platform of the Bologna Children’s Book Fair consolidated its role as an integrated hub of online tools and services, amplifying and optimizing the BCBF experience. Over 1 million views for the Fair’s website, 135,000 unique users, 61% of which connecting from abroad, live streaming with peaks of over 5,000 views, 85,000 users registered for online services, reached and updated through editorial e-mail marketing activities throughout the year. 6 active social channels confirmed their position as a point of reference for the international community, reaching a figure of over 42,000 professionals following the Fair on Facebook, 10,000 on Twitter and 22,000 on Instagram (a leading position among international players on this social media). Over 125,000 likes, shares and interactions were registered during the event. Last, the great success of the BCBF 2018 App with its 2,000 downloads.

Guest of Honour of next edition will be Switzerland.