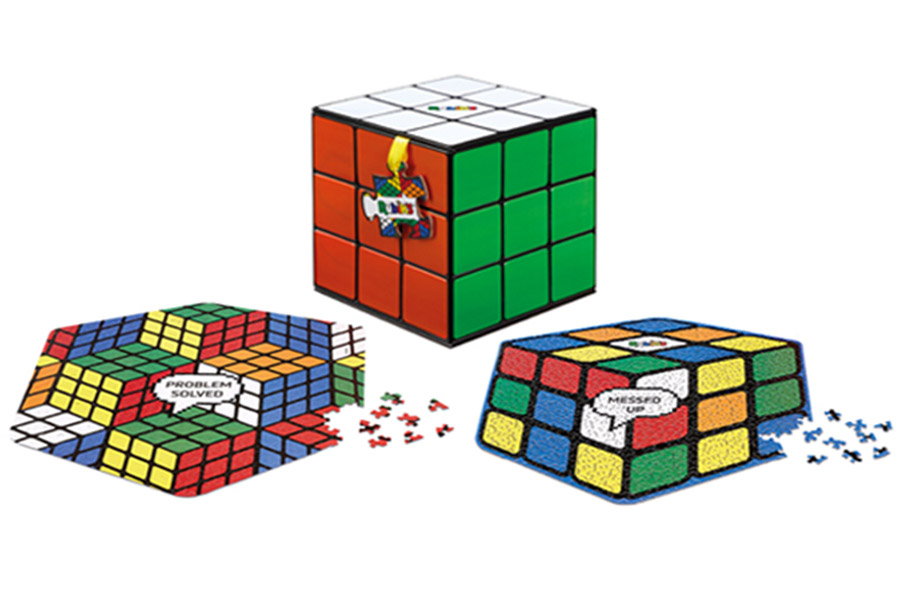 The Toy Fair Hero Toy award is a new concept by the BTHA that shines a spotlight on exceptional toys that are launching this year across all categories. The Toy Fair Hero award is bestowed upon the 25 best toys and games that are deemed to be a cut above the rest. Selected by toy experts and the BTHA, the winners were announced the 23rd of January at the opening of Toy Fair 2018 and are showcased at the front of the press office, for all visitors to see.

The Rubik’s Cube jigsaw puzzle is the latest addition to Gibsons’ successful Iconic Brands Collection, the range of gift puzzles that take beloved brands, such as Marmite, VW and Pringles, and transform them into challenging jigsaws that are presented in larger-than-life packaging.

First created in 1974 by Professor of Architecture Erno Rubik, the Rubik’s Cube is more than just a toy – it’s a mathematical wonder and an emblem of the 1980’s. Gibsons transformed the Rubik’s Cube into a devilishly difficult, double-sided, 500 piece jigsaw puzzle that is sure to test even the most advanced jigsaw puzzle enthusiasts when it is released in April 2018.

Emily Charles, Gibsons’ Product Development Manager states, “We are thrilled that our Rubik’s Cube jigsaw has been recognised as a ‘hero toy’ by the BTHA experts. The Rubik’s Cube is such an iconic toy and we’ve worked hard to ensure that the jigsaw puzzle is just as tricky to complete as the Cube itself!”

Lori Heiss Tiplady, VP Toys & Publishing at The Smiley Company, says, “From the moment we saw Gibson’s fantastic Iconic Brands Collection puzzles we knew that Rubik’s would be a perfect addition to the range with its world-famous Cube. We are so pleased that the final result has met with such an enthusiastic reaction from the trade and the honour of being awarded a Toy Fair Hero award by the British Toy & Hobby Association at this year’s London Toy Fair, and can’t wait to see it at retail later this year.“