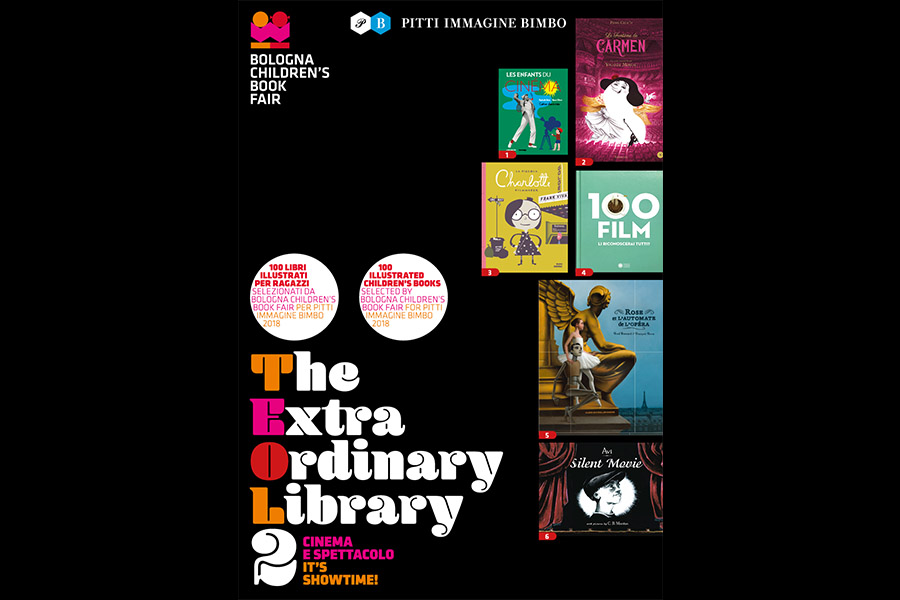 The ExtraordinaryLibrary 2. Cinema and show of 100 illustrated books for children selected by Bologna Children’s Book Fair for Pitti Immagine Bimbo 2018 and NiceLicensing, the first Pitti Bimbo licensing appointment: a unique opportunity to meet the world of children’s fashion and 24 licenses selected by world of brands.

The collaboration between Bologna Children’s Book Fair and Pitti Immagine Bimbo continues in 2018: a happy meeting that successfully combines the creativity of the international BCBF illustration and the kids’ fashion world of Pitti Bimbo.
The Central Pavilion of the Florentine show will host The ExtraordinaryLibrary 2. Cinema and show: 100 illustrated books for children selected by Bologna Children’s Book Fair for Pitti Immagine. The bibliographic exhibition is an invitation for readers and enthusiasts to open their eyes and be enchanted by a selection of 100 illustrated books all over the world, to discover the history of the show and its icons between cinema, theater, music, opera and dance. The page of the book becomes a cinematic screen, a scenic stage, a stage, a marquee and a curtain of wonders. The contemporary international children’s publishing interprets the lights and the stars of the show in books that offer surprising narratives and visions.
The bibliographic exhibition invites readers to immerse themselves in unexpected atmospheres to meet directors, dancers, singers, actors, clowns and jugglers, all committed to giving visible form to dreams, in a universal language capable of reproducing the movement of the world and multiplying its beauty. From Audrey to Charlot, from Hitchcock to Tati, from the Magic Lantern to Godard, from Ella Fitzgerald to the Opera, from the Zootropio to the treasure hunt, the exhibition is an opportunity to read true and fantastic stories of people, characters, crafts and places of the show, the cinema, the dance and the singing through the illustrated pages of 100 extraordinary books from all over the world.
A collection of books to guide the gaze to the discovery of its infinite wonders of the entertainment world, but above all a unique opportunity for buyers to come into contact with volumes, images and international illustrators who can offer a new creative inspiration and suggest opportunities for business and unpublished collaborations. The exhibition, curated by Marcella Terrusi and Silvana Sola (Cooperative Giannino Stoppani) for Bologna Children’s Book Fair, is an opportunity to enjoy new perspectives and discover the extraordinary richness of international publishing for children and young people, as well as its infinite fields of declination.
Moreover the world of illustration will invade the entire Pitti Bimbo this year: to “define the soul” of each area of ​​the fair will in fact be a work chosen by Pitti Immagine among the works of the artists who were protagonists of the Mostra Illustratori in the two years of collaboration with Bologna Children’s Book Fair. Gaia Stella for Apartment; Candela Ferdmann for the Editorials section; Mayumi Oono for Kidz Fizz; Elena Maricone for Echethic; Marie Mignot for the Fancy Room; Violeta Lopiz for Pitti Bimbo1; Sport Generation will feature Camilla Falsini’s illustrations; Emanuelle Bastien for The Nest; Paul Toussaint for Super Street; Mariann Maray for Pitti Bimbo2. The tables will then be exhibited on the TimeSquare wall of the Fortezza da Basso and published in the catalogue accompanied by the authors’ biographies.
Finally, the partnership between Pitti and the Children’s Book Fair is renewed this year with a new opportunity: NiceLicensing, a space created in collaboration with the Bologna Licensing Trade Fair: it’s a new meeting point between the world of clothing and the licensing industry. For the first time, the world of licensing enters the Fortezza da Basso with a large, fully dedicated space.This initiative represents a selected preview of what will be exhibited at the Bologna Licensing Trade Fair, the only fair in Italy dedicated to the licensing world, next March.
These brands are the protagonists of NiceLicensing: CPLG Italy with Doraemon, Pink Panther, Space Invaders, Sesame Street, L.o.L. Surprise!; Turner Broadcasting System Italia with Ben10 and We Bare Bears; Viacom Media Networks Italy with Shimmer & Shine; Sanrio with Mr. Men & Little Miss and Hello Kitty; Premium Licensing with Betty Boop and Popeye; Global Brands Group with Smurfs, Simpsons and Keith Haring; Atlantyca Entertainment with Geronimo Stilton and Pennuti Skizzati; The Pokémon Company International with Pokémon; Victoria Licensing & Marketing with Barbie and Hot Wheels; Smiley Company with Smiley Original e Rubik’s; IMG with NFL – National Football League e National Geographic.