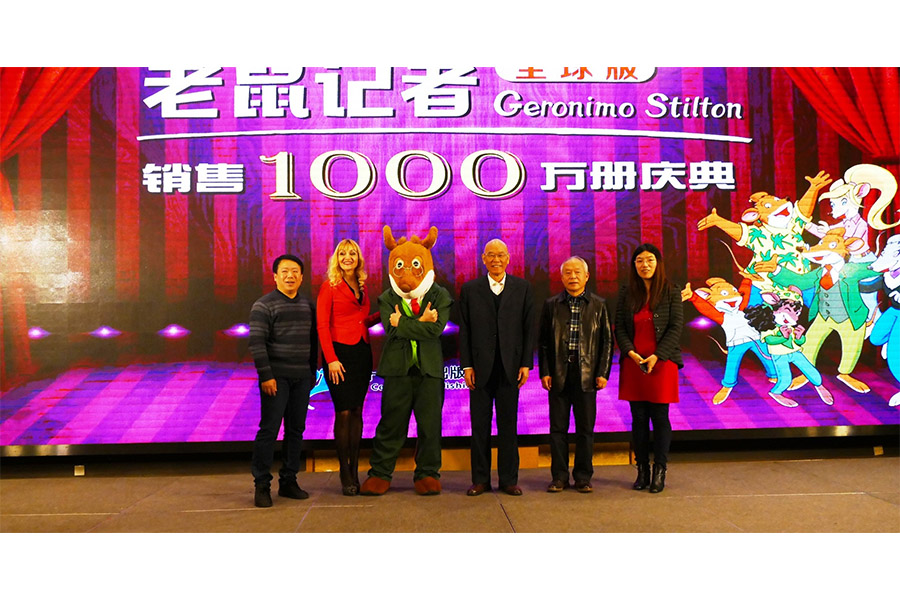 Geronimo Stilton is a transmedia brand also in China

On the occasion of the ceremony that celebrates the result of distribution of Geronimo Stilton’s books in China, Atlantyca announced the agreement for the distribution of TV and licensing rights of the animated series dedicated to the most famous mouse journalist.

On January 10th, it took place in Beijing the ceremony that celebrated the distribution in China of 10 million copies of Geronimo Stilton books published by the Chinese publisher 21st Century Publishing House. An outstanding result that was celebrated at the Radisson Blu Hotel Beijing in the presence of the Vice President of the China Writers Association, Gao Hongbo, the former Vice President of the Publishers Association of China and former President of the Chinese Board on Books for Young People, Hai Fei and the famous author for children and professor at the Shanghai Normal University, Professor Mei Zihan. Thanks to this success, 21st Century Publishing House has reached the fourth place in the world ranking of the most famous international publishers of Geronimo Stilton.

Claudia Mazzucco, CEO of Atlantyca and manager of Atlantyca China, the Beijing-based business unit, also announced the signing of two important deals with the company PumpPush Creative: the distribution contract was invited to the ceremony of the audiovisual rights of the TV series and the respective agency mandate for licensing and merchandising.

Claudia Mazzucco, CEO of Atlantyca and already winner of the Capital Elite Women Manager award at the China Awards in 2010, commented: “The sales results of Geronimo Stilton books in China by the publisher 21st Century Publishing House are surprising and fill us with pride. They also confirm that China is looking for MADE IN ITALY content for children. This is why we are excited about the new collaboration with PumpPush, which concluded our distribution manager Alessandra Dematteis and which will allow us to reach Chinese children with the TV series and to make the character of Geronimo Stilton broadcast in China too, with a great increase in popularity” .

Explains Xiong Chi, Vice Chief Editor of 21st Century Publishing House: “The beauty of Geronimo Stilton lies in the fact that each exciting story in this series offers positive values such as honesty, courage, kindness, love for nature … These themes, shared by people all over the world, can help young readers to create their own values, which allow them to make positive choices throughout their lives. Over the years the Geronimo Stilton property has grown a lot in China. Just considering the excellent reputation and the excellent sales of the Stories of Laughing, we have also signed with Atlantyca for two other series, Superheroes and Time Travel “.

Adds Yujie Yang, CEO of PumpPush: “As a longtime fan of Geronimo Stilton, we are thrilled to be a partner of Atlantyca Entertainment on this world-renowned IP. Not all companies know us because we are a small reality. But we can do great things with creativity and enthusiasm. We are sure that this partnership will represent another success story in the Chinese market“.