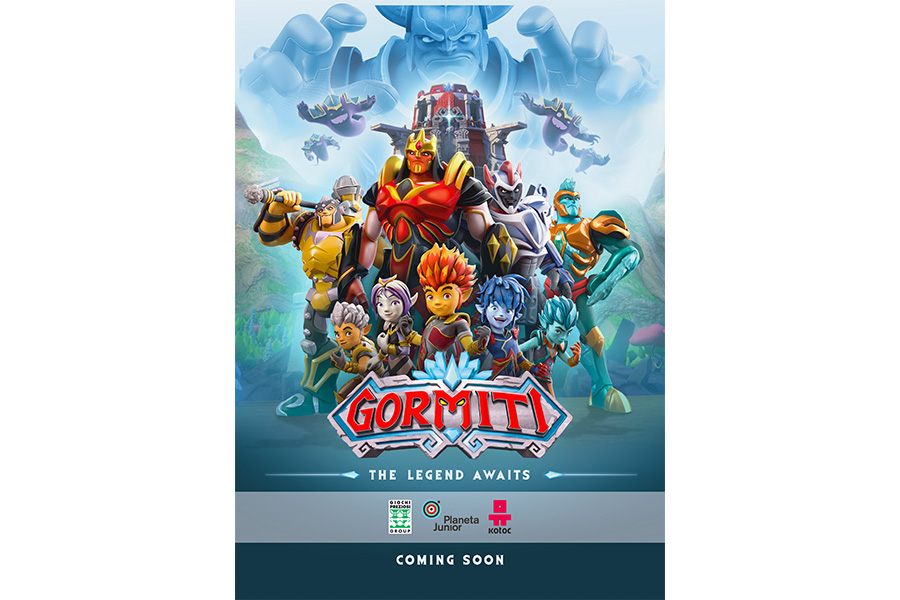 Brand new action-comedy TV series Gormiti, based on the global phenomenon, is produced by Giochi Preziosi, Planeta Junior and Kotoc and it was premiered at a special event during MIPJUNIOR.

A planned total of 52 episodes each lasting 11 minutes will combine action and comedy, aiming boys 5-8, and it is based on global phenomenon Gormiti, created by Giochi Preziosi. The phenomenon was born in 2005, becoming really fast the leading boys action property throughout Europe, and distributed in over 50 countries. More than 500 million figures have been sold with a result of €1.5 Billion in retail Sales. Production of the series has already started and the first 26 episodes are scheduled for delivery in 2018.

Written by a team of international writers headed by LA-based Romain Van Liemt, creator of the show, the animation series is being developed by Kotoc, producers of international TV projects such as Sendokai Champions or Mutant Busters.

When four kids discover the hidden One Tower it is as if all their heroic dreams suddenly became reality. Together with the One Tower they had also found the Elemental Bracers, which allows them to call and fight with the legendary Gormiti. But the Tower revealed itself for a reason: the Darkans, Gormiti ancestral enemies, are back, threatening all living beings in Gorm. Unprepared, the kids need to learn how to become true heralds. With the help of Ao-Ki, the girl tasked to train them, the new heroes will master the Elemental Bracers, call the legendary Gormiti and save their world. Gormiti is a series about team work, friendship, achieving goals and having fun!

“Gormiti is one of the most important brands here in Giochi Preziosi, a historical property that gifted kids all around the world with hours of fun. Everybody is thrilled at the idea of this reboot – the partnership with Planeta Junior and Kotoc has breathed new life in Gormiti and we hope to create a new era of amazing heroes” says Dario Bertè, CEO at Giochi Preziosi S.p.A.

“It is an opportunity, but also a great responsibility, to create a new Gormiti story that lives up to the expectations of millions of children around the world. At Giochi Preziosi they are very aware of this, so that’s why we have set up an experienced team, who knows the IP very well – and in many cases they are even fans – that I believe is creating some of the best Gormiti chapters ever”. says Diego Ibáñez, International Commercial Director at Planeta Junior.

Freddy C. Schwaneberg, CEO at Kotoc says “At Kotoc, we love creating and telling stories because not so long ago we were kids too, watching mesmerized as our favorite characters had the most amazing adventures. When we were approached to make the new Gormiti series a reality, we couldn’t think of a better way to honor the property and make it an even more awesome experience – for all the kids who will grow up with it, just like we did.”