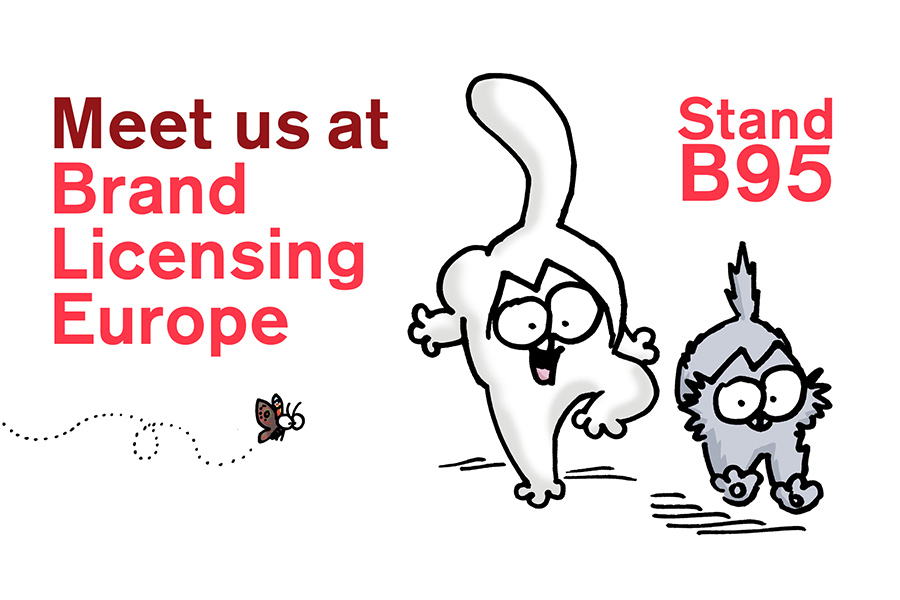 Exhibiting at stand B95, there will be a live session from two of MasterChef’s top finalists and a drawing masterclass from Simon Tofield, the award-winning animator and creator of YouTube sensation Simon’s Cat.

Global content creator, producer and distributor, Endemol Shine Group, announced their impressive line-up for this year’s Brand Licensing Europe where they will be showcasing their rich and diverse portfolio of brands.

With offices in 28 countries, Endemol Shine Group control brand licensing rights to some of the most high profile and creative IP in the world, from entertainment and scripted through to animation and game shows. Their uniquely diverse mix of brands include a number of well-established properties such as MasterChef and the Money Drop in addition to new brands with huge licensing potential.

Frances Adams, Global Director of Brands and Licensing, Endemol Shine Group said, “With such a prolific range of quality IP, we are looking to maximise the licensing potential of our brands locally, regionally and globally. We want to build on our current successes, such as our extensive licensing programme for MasterChef, and partner with the best licensees to create innovative, exciting new products that our audiences will love.” Open to all attendees, at the Endemol Shine Group stand (B95) on Tuesday 10th October 4pm – close, 2010 MasterChef finalist Tim Kinnaird will be preparing his signature macarons alongside the UK’s 2016 winner Jane Devonshire, whilst they talk to the audience about their experiences on the hit show. And on Wednesday 11th October 11am – 1pm Simon’s Cat creator, the award-winning animator Simon Tofield, will be meeting guests and creating one-of-a-kind illustrations of people’s pets for them.

MasterChef
The most successful factual-entertainment format in the world, MasterChef is seen in over 200 countries and watched globally by over 250 million viewers. The MasterChef brand extends into global travel experiences, worldwide publishing deals and a number of international consumer products such as a coffee range in Italy and bespoke cooking spices in Mexico. The brand also sees huge retail success in multiple markets with TCC’s 40+ loyalty programs and coming soon to market will be a European-wide range of MasterChef kitchenware in conjunction with homeware experts, Case Licenses.

Big Brother
Big Brother started a TV revolution and quickly became a cultural and social media phenomenon pushing boundaries across all platforms around the world. Produced for 64 territories it is the most successful reality format in the world.

Simon’s Cat
With over 10million online fans, Simon’s Cat has become a hit with audiences worldwide and it continues to find new audiences with a growing international fan base. The brand has huge consumer appeal with a recently launched Primark clothing range and hit app Simon’s Cat Crunch Time generating 1.3 million downloads in just 6 weeks.

Mr Bean
Mr Bean is a global sensation, broadcast in 195 territories with over 25 years in continual distribution. The brand has also seen phenomenal digital growth, currently averaging 300 million monthly online views, outranking the likes of Taylor Swift and Harry Potter with 75million fans on Facebook. Later this year Mr Bean will star in his own mobile game in partnership with the Mayor of London’s official promotional agency London & Partners. Play London with Mr Bean is an interactive mobile Match-3 game featuring hidden treasures and great offers which aims to attract UK and international visitors to the city.

Hunted
Hunted is a real life thriller where ordinary people go on the run from a team of expert hunters. Produced for 6 territories including the UK, Russia and the USA whose launch ranked as the highest-rated non-scripted new launch since X Factor in 2011 with a consolidated audience of 13.34 million viewers.

Humans
Humans is Channel 4’s most successful original drama series in over 20 years. The BAFTA-nominated series is set in a parallel present where the latest must-have gadget for a busy family is a Synth – a life-like humanoid, eerily similar in appearance to humans.

Black Mirror
Emmy-nominated mind-bending anthology series created and written by Charlie Brooker. The critically acclaimed series taps into the collective unease about our modern world. Each stand-alone episode is a sharp, suspenseful tale exploring themes of contemporary techno-paranoia. Black Mirror has won a Rose d’Or and an International Emmy Award.

Tenable
The new highly addictive, irresistible play along quiz has recently been commissioned for a bumper 60 episode second series by ITV in the UK. Tenable takes the obsession with top ten lists and turns it in to the ultimate gameshow. Over the course of each game, a team of five players step up to take on a top ten question. The aim is for the team captain to get as many team mates through to the final whilst earning as much money as they can.

The Wall
New original US format, produced for 7 territories, The Wall is a wildly unpredictable, fast and simple game show with huge cash sums on the line.

Money Drop
The BAFTA and Rose d’Or winning show is a global hit locally adapted in over 50 countries. The Money Drop has broken TV and online records around the world – played online over 41 million times worldwide. A pair of contestants are given their prize at the start of the show – bundles of real cash. All they have to do is keep hold of it.