Mondo TV, one of the largest European producers and distributors of animated content, has announced the arrival in Italy of season one of the new children’s 3D CGI animated action-adventure show Robot Trains. It will show daily on DeA Junior, a pay TV channel on the Sky platform, from September 4th.

This exciting 32 x 11’ animated series for children aged between four to seven years is set in Train World, where all the citizens are trains. However, among the residents there are special trains that can transform into robots! 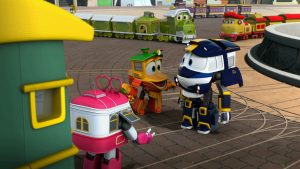 The show, producing by one of South Korea’s largest content and marketing companies, CJ E&M, is already a big hit in Korea where it has enjoyed licensing success in toys, publishing, kitchenware, food, back to school, stationery and so on. From media to licensing and merchandising, Robot Trains will be distributed and licensed by Mondo in a number of territories across Europe (i.e. Italy, Spain, Portugal), the Middle East, Africa and the Pacific region.

The second season of Robot Trains has already been announced. Mondo TV Suisse will not only distribute and license the show in a number of territories but will be partnering with CJ E&M for co-producing the new series.

Matteo Corradi, Mondo TV CEO, says: “Robot Trains is a thrilling, funny and beautifully designed show with an obvious appeal to a pre-school audience. I am looking forward to Robot Trains repeating its Korean success in Italy — and many more territories!”

Hyunil Park, CJ E&M VP, says: “The arrival of Robot Trains in the European market is a cause for celebration. I am sure that this exciting and engaging show, which has been so popular in its home market, will enjoy even more success — both in Europe and beyond.”