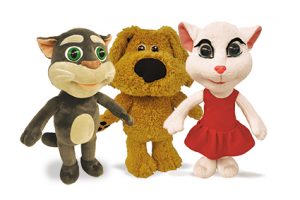 Italian and European markets. The collection, which includes in addition to the classic plush also a more interactive version that refers to the dynamics of the app, will be launched for Christmas 2017. At completion of the line, Grandi Giochi will also produce for this license the Zookies and the magical Pannetto.

Then further increases of the TV series distribution, that is now available for broadcasting in more than 110 countries around the world, while in Italy it continues its programming on K2.